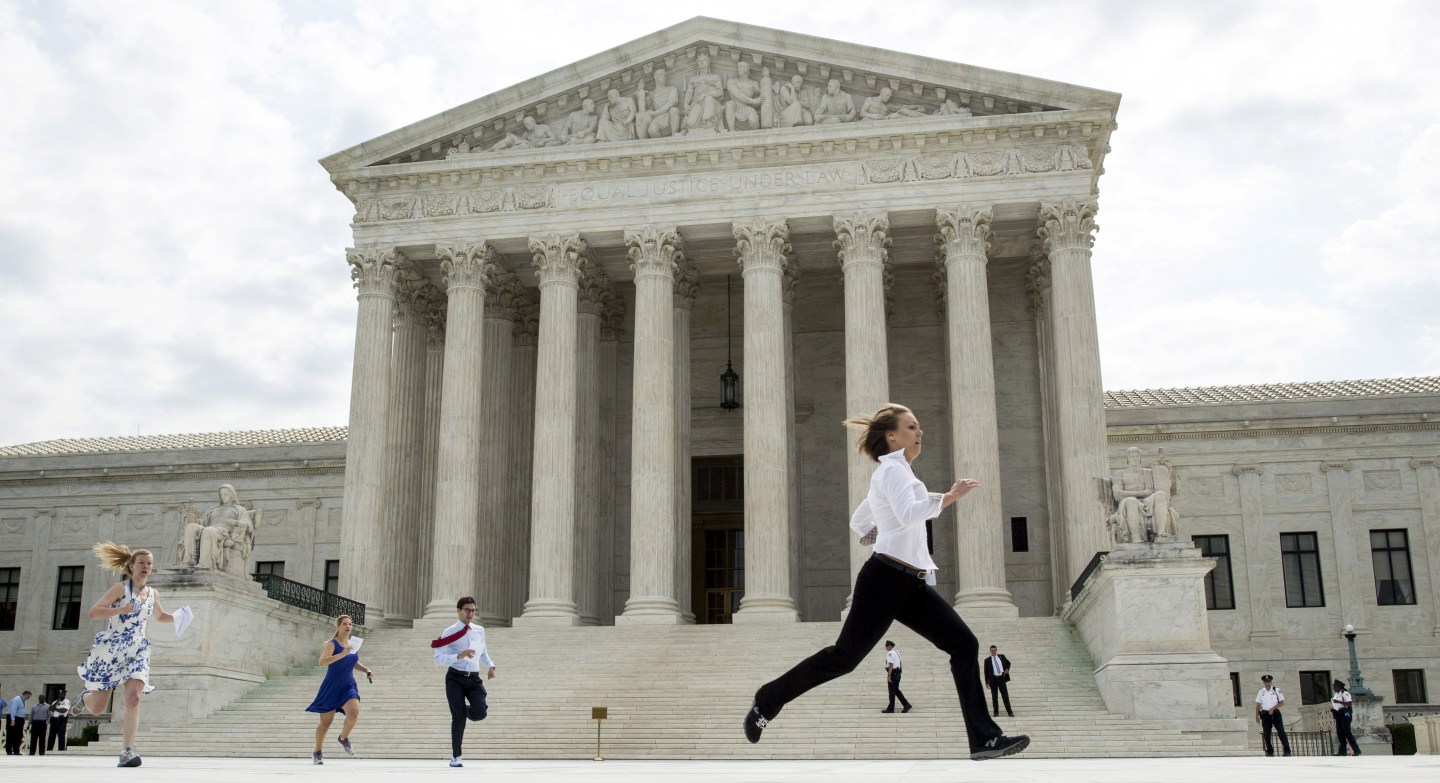 Interns with media organizations run with the decision upholding the Affordable Care Act at the Supreme Court in Washington June 25, 2015. The U.S. Supreme Court on Thursday upheld the nationwide availability of tax subsidies that are crucial to the implementation of President Barack Obama's signature healthcare law, handing a major victory to the president. REUTERS/Joshua Roberts TPX IMAGES OF THE DAY - RTR4YXSO
Photograph by Joshua Roberts — Reuters

It was just a matter of time until the gig economy moved upmarket. It started with drivers and cleaners, who rely on tech platforms to sell their services, but now droves of white collar worker are arriving too: On Tuesday, San Francisco-based UpCounsel announced it raised $10 million to expand its online platform and “virtual lawyer community.”

UpCounsel provides a screened network of lawyers that can help small-to-medium size companies get quick legal expertise when confronting issues like contracts, stock options or patents. For the companies, this can represent a faster and cheaper alternative than law firms. For the lawyers on the platform, which pay UpCounsel a 3-15 percent commission, many are refugees from “Big Law” firms, and the platform offers independence and a more measured pace of work.

When UpCounsel started out two years ago, I was curious if many companies would roll the dice on a lawyer from the Internet – what if they hired a Lionel Hutz? But CEO Matt Faustman said at the time that the platform’s screening policies offered a high measure of quality control and the service would grow.

So far, it looks like he was right. Speaking by phone last week, Faustman said thousands of lawyers have asked to be on the platform and that UpCounsel picks only the most highly skilled. He added that much larger companies are now using its services, and that general counsels and HR departments regularly turn to UpCounsel.

Faustman said the company is not profitable, but is growing revenue twenty percent month over month. It’s not providing specifics about top or bottom line revenue for now. The company plans to use the money from its new funding round, which was led by Menlo Ventures, to expand marketing, sales and services. UpCounsel’s current services include billing, practice management and payment tools.

UpCounsel is one of several companies that are chipping away at law firms’ once-exclusive hold over legal services and client relationships. Others include LegalZoom, which offers do-it-yourself documents and a lawyer network, and Google Ventures-backed Rocket Lawyer. The startup, Shake, recently raised money for its app that lets freelancers and others create contracts on the go.

Also contributing to Tuesday’s Series A funding round are Homebrew and Metamorphic Ventures, both of which invested in UpCounsel before. All told, the company has raised $13.9 million.

An earlier version of this article incorrectly stated companies pay UpCounsel’s commission; it was amended at 1:30pm ET on Wednesday to reflect that it is the lawyers who pay.