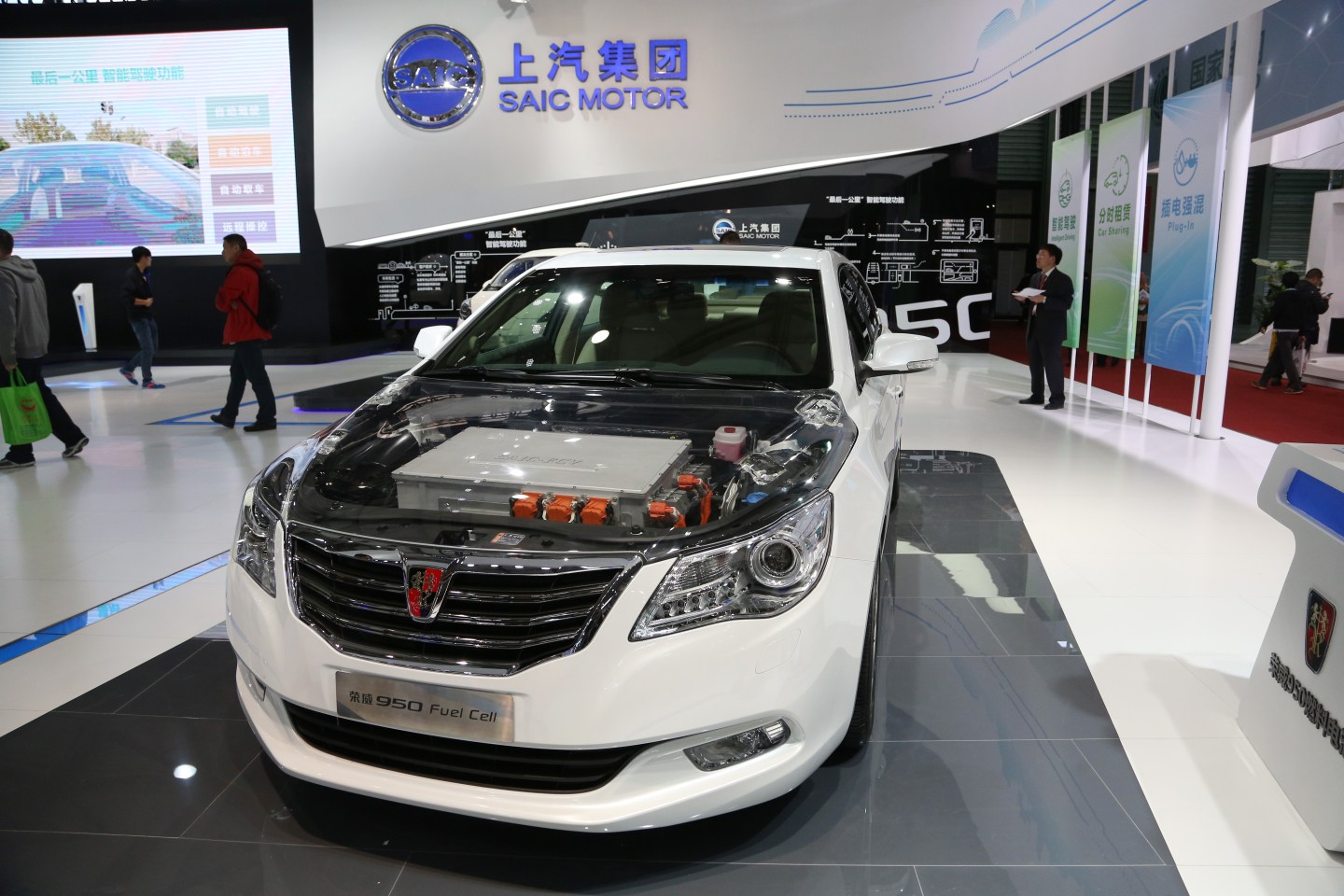 --FILE--A Roewe 950 Fuel Cell electric car of SAIC Motor is displayed at the 2014 China International Industry Fair in Shanghai, China, 4 November 2014. SAIC Motor Corp., Chinas largest auto maker by sales, is banking on sport-utility vehicles to help revive the flagging fortunes of its own brand. The SUV market is growing very fast for domestic (Chinese) brands, a spokeswoman for the company told reporters Friday (17 April 2015). Were hoping to catch that market. Last year, sales of SAICs own brandsRoewe and MGwere off 22% compared with a year earlier. SAIC also makes passenger cars in joint ventures with General Motors Co. and Volkswagen AG. The spokesman said the company had received 5,000 orders for its just launched MG GS SUV and was quite confident about the vehicles sales prospects. SAIC Motor would consider it a success if it could maintain monthly sales at a similar level, suggesting annual sales of around 60,000 cars.
Photograph by AP

Brazil, China, India, and Mexico are getting their own group of Chevrolet-branded cars designed with one goal in mind: help General Motors dominate emerging markets.

General Motors (GM) will spend $5 billion to develop a new family of vehicles that share a common architecture that can be customized for different regional markets, Reuters reported. The group of cars, displaying the Chevrolet brand name, will be manufactured in Brazil, China, India, and Mexico. The cars will also be shipped to other emerging and developing countries.

GM will work with Chinese automaker Shanghai Automotive Industry Corp, or SAIC, the state-owned company it already has a partnership with. The two companies will design and manufacture several Chevrolet compact cars and sport-utility vehicles that will go on sale starting in 2019.

It’s an effort that’s overdue. While sales of cars and trucks in North America have improved since the dog days of the recession, analysts and researchers believe that eventually it will peak—if it hasn’t already. It’s the same story in Western Europe.

That leaves China and other emerging markets, where the world’s major automakers are jostling for position. The automaker that can gain an early foothold in emerging economies is essentially ensuring its survival in the coming decades.

GM already has a strong presence in China, where it has some 11 joint ventures and two wholly owned foreign enterprises as well as more than 58,000 employees. The Detroit-based company sells more vehicles in China than in the U.S.

However, sales in China have slowed. GM and its Chinese partners sold 246,066 vehicles in June, up 0.4% from the same month last year, according to GM. The flat sales occurred even after GM partner SAIC cut prices by as much as 20%.

GM sales in China totaled 1.72 million, up 4.4% from the same period in 2014, in the first half of 2015. The increase was driven primarily by GM’s improved mix of sport-utility vehicles and multi-purpose vehicles, the company said in its June sales release. The Chevrolet Cruze is the brand’s most popular model in China.

The announcement comes on the heels of a global re-shuffling of GM’s operations. In March, GM became the first western automaker to exit Russia when it closed its massive St. Petersburg assembly plant and took a $600 million write-off. Meanwhile, the company increased capacity in Mexico. GM manufactures about 650,000 vehicles and nearly 900,000 engines annually in Mexico. It’s one few global automakers to expand production there.