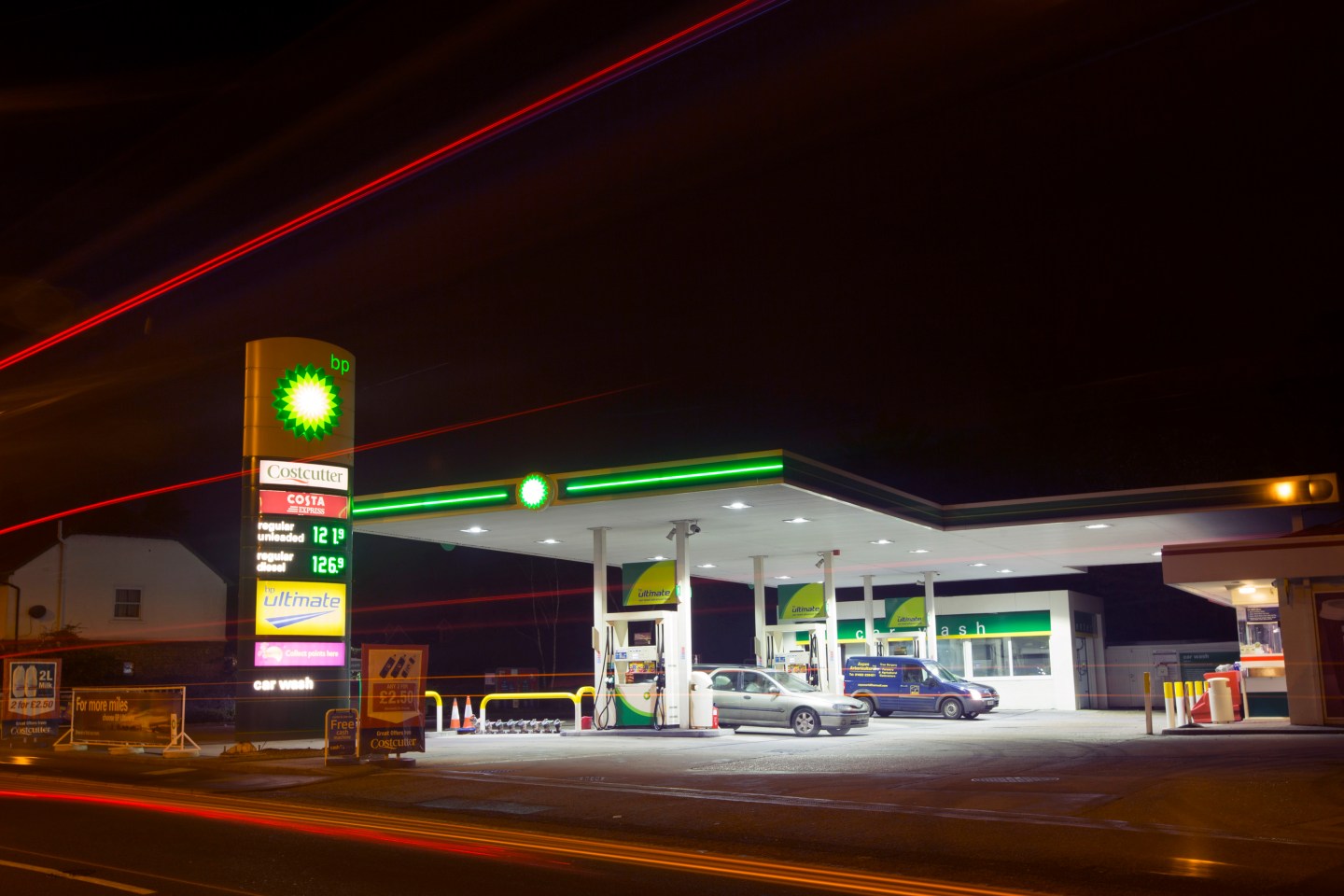 Light trails made by passing automobiles are seen as vehicles stand at fuel pumps at a gas station operated by BP Plc in Guildford, U.K., on Monday, Dec. 8, 2014. Brent crude oil for January settlement climbed 67 cents to $66.86 a barrel on the London-based ICE Futures Europe exchange at 12:08 p.m. local time. after having slid $2.88 to $66.19 yesterday, the lowest close since September 2009. Photographer: Jason Alden/Bloomberg via Getty Images
Photograph by Jason Alden — Bloomberg via Getty Images

BP Plc’s (BP) woes show no sign of ending as the company swung to $5.8 billion loss in the second quarter, thanks to falling oil prices and another $9.8 billion in charges to settle the remaining U.S. government claims for the Deepwater Horizon disaster.

The loss had been expected since the company announced the settlement in June, hoping to draw a line under the worst environmental disaster in U.S. history. The spill has now cost BP a total of $54.6 billion, and thousands of private claims against it are still outstanding. The company warned again on Tuesday that the impact of still-outstanding issues on its earnings could be “material”.

The company’s operating business looked little better, after a quarter in which crude prices fell to their lowest level in six years in a heavily oversupplied global market. Underlying cost replacement profits, the measure tracked by most analysts, fell to $2.43 billion from $5.90 billion a year earlier (before the sharp fall in crude prices) and from $2.53 billion in the first quarter of 2015. The bottom line was saved by BP’s downstream division, which includes refining, gasoline distribution and oil trading, and which generated over three-quarters of total underlying profit. By contrast, the contribution from its stake in Russian oil giant Rosneft halved to $510 million and upstream profits fell by nearly 90% to $494 million.

And there’s more gloom ahead: the company expects refining margins to shrink in the third quarter, and the spot crude price has tumbled in recent weeks as world commodity markets have taken fright at the scale of the economic slowdown in China. It expects its output of oil and gas to be broadly flat in the current quarter.

Like every other oil company, BP is scrambling to cut costs. It cut its capital expenditure by 22% in the first half of 2015 to $9.1 billion, and now expects full-year capex to be less than $20 billion, down from $22.9 billion in 2014. Some of those savings are being diverted to pay for other permanent cost reductions: the company now expects restructuring charges of $1.5 billion this year, up from the $1 billion it announced in December.