3 reasons this is a breakthrough year for mobile marketing 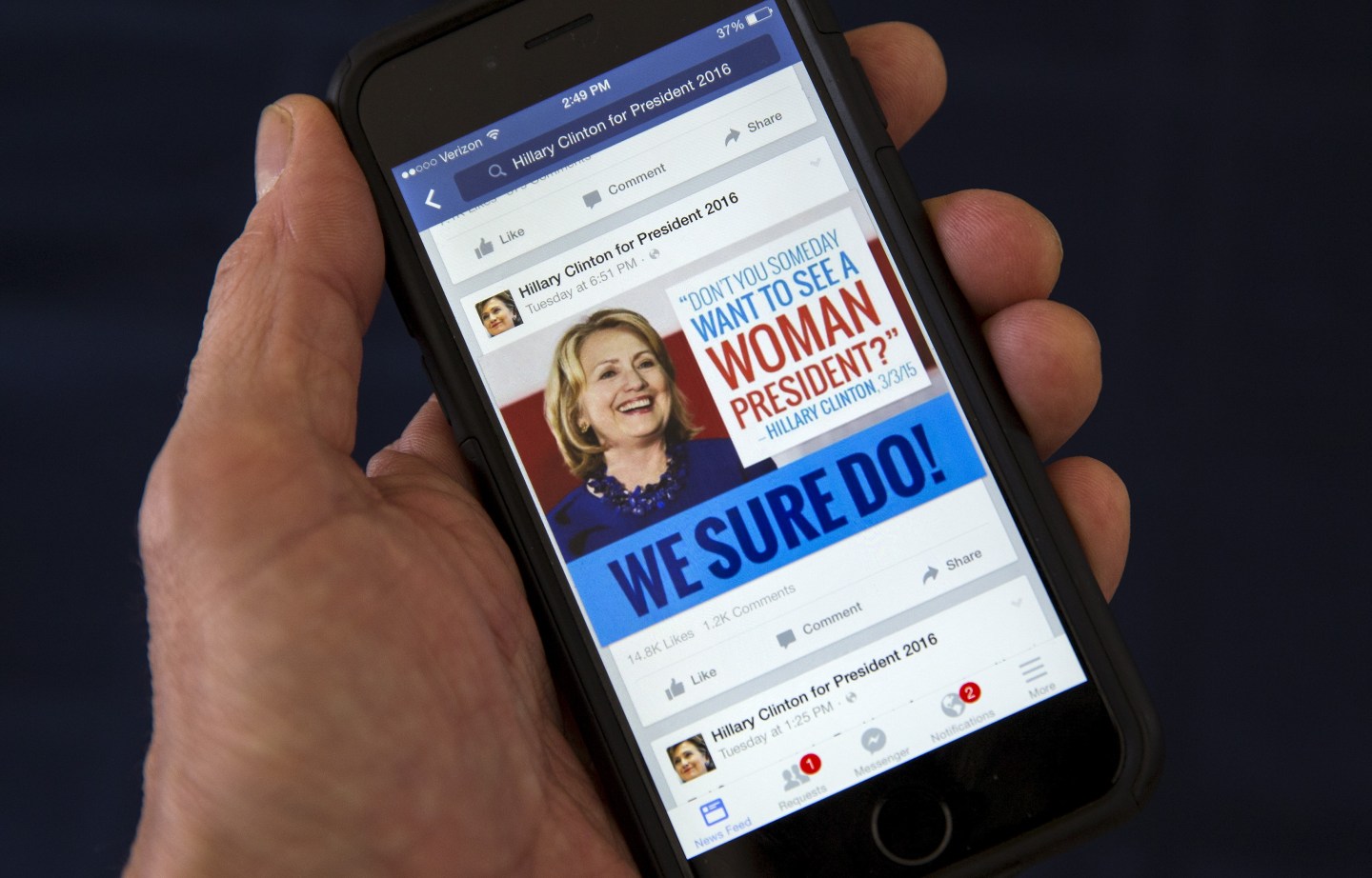 A mobile phone shows a Facebook page promoting Hillary Clinton for president in 2016, in this photo illustration taken April 13, 2015. By one estimate U.S. online political advertising could quadruple to nearly $1 billion in the 2016 election, creating huge opportunities for digital strategy firms eager to capitalize on a shift from traditional mediums like television. REUTERS/Mike Segar - RTR4X894
Photograph by Mike Segar — Reuters

After all, one commonly cited forecast suggests that mobile gadgets could be the focus for 72% of all digital ad spending by 2019.

But did you know 2015 looks to be the turning point?

Research firm eMarketer projects 50% growth this year. That will bring mobile ad spending to almost $29 billion, slightly less than half.

Next year, the balance will become mobile-dominant for one very profound reason: most consumers now spend more time peering at mobile screens than ones on their desktops. But that oversimplifies the influence of smartphones on marketing campaigns. Here are three other trends that marketers should keep in mind.

#1. The cross-channel link is more demonstrable

I have received close to a dozen pitches over the past month from ad-tech companies that track the path of purchase intent across multiple touch points from email to mobile search to cash register. Why so much activity?

Here’s the number that’ll make you sit up: marketers working with San Francisco-based audience intelligence firm NinthDecimal recorded an 80% increase in store visits on the first day of many mobile campaigns. Its clients include American Express, Comcast, Kraft, Microsoft, Starbucks, Target and Toyota.

How effective are mobile ads at driving in-store sales? One software company that can answer that question is 4Info of San Mateo, California, which collects benchmarks in collaboration with digital media company Catalina.

Early findings suggest marketers should expect roughly $30 in retail sales per 1,000 impressions, according to the metrics these two companies are correlating. The data covers eight of the 10 biggest consumer products companies around—covering beverages, baby products, food, and health and beauty items.

“Nobody thought it was possible to tie a mobile impression to an offline sale,” said 4Info CEO Tim Jenkins. His overall takeaway: marketers can expect higher returns from fewer mobile eyeballs.

By the way, the notion that consumers are reluctant to complete transactions on a tablet or handheld may be more myth than reality.

Criteo, a software company that specializes in “performance advertising” across mobile devices and desktop browsers, is seeing a spike in transactions on smartphones as screens get bigger. “In the next six months, our clients will see a much larger number of ecommerce sales coming from phones,” said Criteo’s chief revenue officer Mollie Spilman. “Another myth is that these purchases are low-ticket items. Now, the basket sizes are on par with tablets and [personal computers].”

Another thing that is becoming clearer: while consumers are more likely to be influenced by mobile messaging, marketers have a much smaller window of opportunity to pull this off.

People tend to use their mobile gadgets in sessions of times to check email, grab their digital wallet, search for a local business, or consult a mobile app for information. Google calls these “micro-moments,” and the behavior is very differ from what marketers have come to expect for desktop-dominant campaigns.

“You need to be found wherever consumer traffic is. … If you’re just out there in browsers, you’re missing out,” said Sharon Rowlands, CEO of digital marketing software company ReachLocal. “You have to be found in apps.”

#3: Most people won’t spend for an ad-free experience

But those are most metrics for browsers on the desktop. What about tablets and mobile phones?

This fall, Apple’s iOS 9 update will bring them to the iPhone Safari browser, a development that understandably has some marketers concerned. (Here’s a list of the companies working on extensions.) But unless they’re free, it’s unlikely they’ll be considered, finds research from mobile analytics company AppLovin. For most of the tiny number that would pay, $2 per month was the limit.

Today, advertising subsidizes content for those who are unwilling or unable to pay anything for it. Our data indicate that despite the many discussions about how exactly consumers could go ad-free, they aren’t eager to do so if it means paying out of their own pockets.