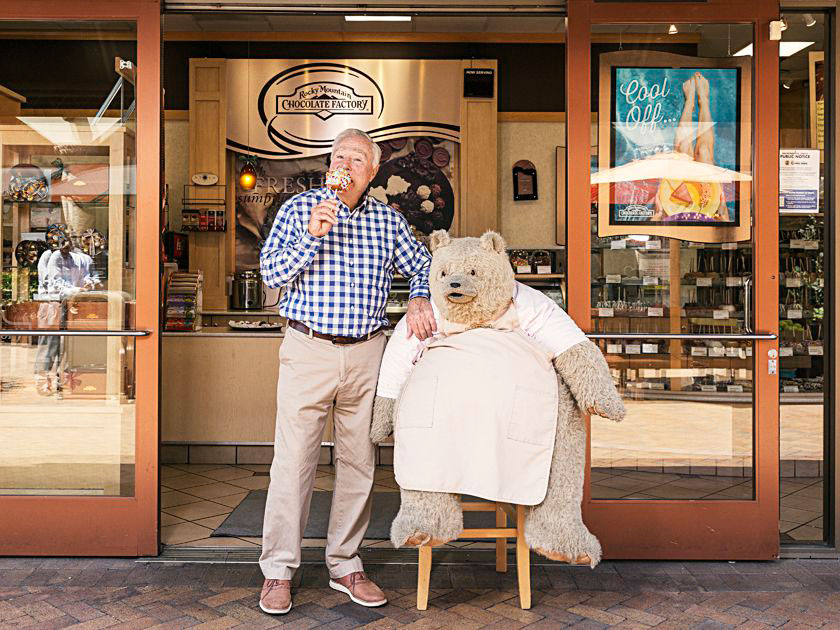 Frank Crail was running a successful tech business when he and his wife decided to start a family in the small town of Durango, Colo., in 1981. Since there was no candy store there, Crail, now 73, borrowed $50,000 to start the Rocky Mountain Chocolate Factory—and then stumbled into making his signature product. Despite being undercapitalized—and at one point unable to pay suppliers—he built the company into an international brand. Last year it had $41.5 million in annual revenue, and 341 franchises in the U.S., Canada, Asia, and the Middle East. Crail’s story:

I have a sweet tooth, but I never intended to go into the confectionery business. Most of my childhood was spent in San Diego, where my mother worked in retail and my father was a parts buyer for an aerospace company.

After two years of college I joined the U.S. Army during the start of the Vietnam War. I ended up in Okinawa, in an Army intelligence unit. A few years later I went to work in the CIA’s computer department in Washington, D.C.  Then in 1972 a partner and I launched CNI Data Processing, which specialized in billing systems for the cable-TV industry.

My wife and I were living in San Diego when we came across Durango, which had a population of 12,000. We liked the idea of raising a family in a small town, and I thought it’d be nice to start a business to get to know people. The local consensus was that Durango needed a car wash, which didn’t appeal to me. Then one guy said we could use a candy store. I did some research and thought if I could do five months of good business with tourists and three months with the locals over the winter holidays, maybe candy would work.

I was not rich from selling my interest in CNI. I was taking out $6,000 a month from the company, which gave me time to feed the family and start the candy store. Two of my friends, Jim Hilton and Mark Lipinski, decided to go in with me. I put a second mortgage on my house and borrowed $50,000 to start the Rocky Mountain Chocolate Factory (RMCF).

Durango is famous for the Durango & Silverton Narrow Gauge Railroad, and I wanted the store to be close to the train station. I found a place and paid $30,000 to buy the lease. It paid for itself many times over, but spending $30,000 of our $50,000 capital put a lot of pressure on us right away.

I wanted to make fudge on a marble table to entertain and keep people in the store. So we ended up finding marble slabs in junkyards, cleaned them up, and used them for our tables. We got antique scales for ambiance. We then arranged to buy chocolate from a candymaker in San Diego named Everett Seeley.

It was 1981 when my wife and I moved to Durango. Jim was going to drive the marble and chocolate up in time to open on the Saturday of Memorial Day weekend. He showed up at 9:30 p.m. Friday night, after getting a flat tire. We got everything set up that night, but the next morning we overslept. By the time we got to the store, it was 9 a.m. We were in such a hurry, we forgot the chocolate. Jim, who came up with all the recipes for the fudge we originally sold, had never cooked more than six pounds of fudge at a time, and never at a high altitude, which affects the outcome. So he went to work making 22 pounds of fudge on a gas stove while I tried to figure out how to work the cash register.

We had a good time that day talking and laughing with people. They’d ask if we did mail orders, and we said, “Yes, of course.” That first day we got 20 fudge orders for cappuccino, black forest, rum raisin, and other flavors. Jim figured out how to make them all.

At the end of the day we sold out of fudge and made $850. The next day was pretty much the same, and we had the chocolate to sell too. That was our start.

Without refrigerated delivery to Durango, I knew we would eventually have to start making the chocolate ourselves. When Everett retired, I talked him into coming out to teach us how to do it.

We needed a cool place to work, and one of our employees lived in an apartment with a basement. So one day I went there to melt chocolate to make turtles. We had mixed the caramel and pecans in the store, and the size was accidentally five to six times larger than a normal chocolate turtle. We dipped them in chocolate anyway. Minding every penny, I said, “We’re not going to throw them out or eat them. We’re going to sell them.” We sold out in a couple of hours. So I decided to make all the chocolate oversize. That mistake turned into our brand. At the end of the first year the store did $180,000 in sales.

We had spent more than the remaining $20,000 initial capital on equipment and inventory, so we were always behind. I didn’t know enough to be afraid.

We were always undercapitalized, and there were times I’d wake up at 2 a.m. wondering how I was going to make payroll. At one point I had to call every supplier to tell them we didn’t have the money to pay their invoices. People understood, and no one asked to be repaid right away.

As long as you’re in business for another day, you don’t give up. You have to continue to fight. From a financial standpoint, it took almost 20 years before we were on solid ground. We went public in 1986, and in 2013, I added U-Swirl Frozen Yogurt to the company.

It takes a little luck, a lot of perseverance, and a great team to sustain and grow a business. I’ve been very fortunate to see this business go from one store to an international brand.

A version of this article appears in the August 1, 2015 issue of Fortune magazine with the headline “Taking Fudge to a New Peak.”