One in five Ottawans is registered on Ashley Madison 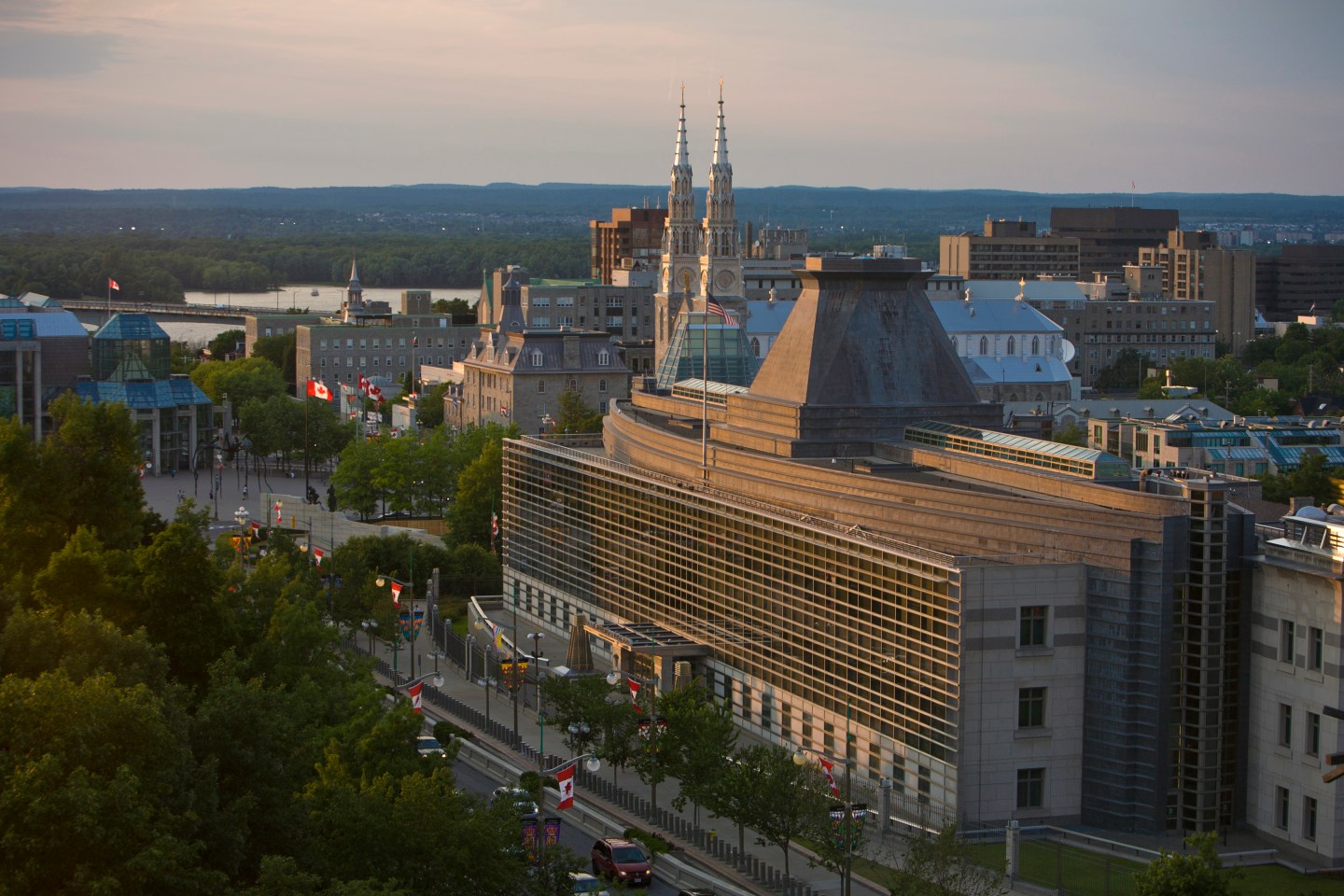 OTTAWA, CANADA - JUNE 30: The United States Embassy building is viewed from the Fairmont Chateau Laurier Hotel on June 30, 2012 in Ottawa, Canada. Ottawa, the captial of Canada, is the fourth largest city in the nation and home to the largest Canada Day celebration. (Photo by George Rose/Getty Images)
Photograph by George Rose — Getty Images

Canada’s prim capital is suddenly focused more on the state of people’s affairs than the affairs of the state.

One in five Ottawa residents allegedly subscribed to adulterers’ website Ashley Madison, making one of the world’s coldest capitals among the hottest for extra-marital hookups – and the most vulnerable to a breach of privacy after hackers targeted the site.

Hackers threatened to leak details including the credit card information, nude photos, sexual fantasies and real names of as many as 37 million customers worldwide of Ashley Madison, which uses the slogan: “Life is short. Have an affair.”

The website’s Canadian parent, Avid Life Media, said it had since secured the site and was working with law enforcement agencies to trace those behind the attack.

“Everybody says Ottawa is a sleepy town and here we are with 200,000 people running around on each other,” said municipal employee Jon Weaks, 27, as he took a break at an outdoor cafe near the nation’s Parliament.

“I think a lot of people will be questioned tonight at dinner,” added colleague Ali Cross, 28.

Some 189,810 Ashley Madison users were registered in Ottawa, a city with a population of about 883,000, making the capital No. 1 for philanderers in Canada and potentially the highest globally per capita, according to previously published figures from the Toronto-based company.

The one bright spot for millions of Ashley Madison’s nervous clients is that the hack appears to be an inside job, according to police and intelligence sources. Avid Life has also said it is convinced the hackers were formerly connected to the company.

That means, for now at least, the perpetrators are driven by ideological and not commercial motives.

The hackers, who referred to customers as “cheating dirtbags who deserve no discretion,” appear uninterested in blackmailing individual clients, unlike an organized crime outfit.

“If it had been organized, they wouldn’t have advertised it,” said a law enforcement source who spoke on condition of anonymity. “But there’s going to be a lot of people with lots of explaining to do.”

The hotbed of infidelity was also the seat of power: The top postal code for new members matched that of Parliament Hill, according to Avid Live chief executive Noel Biderman in a newspaper report published earlier this year.

Biderman said capital cities around the world typically top subscription rates, a phenomenon he chalks up to “power, fame and opportunity,” along with the risk-taking personalities that find themselves in political cities.

The Ottawa mayor’s office and city council either declined to comment or did not return emails.

The hackers want Avid Life to shut down the website, as well as a second one it runs, EstablishedMen.com which is widely described as a “sugar daddy site,” but has no issues with CougarLife.com, a site for older women looking for hookups.

“In our buttoned-down city, it may not be acceptable to openly explore outside of a committed relationship,” said Ottawa marriage counselor Nataxja Cini.

In a city full of professionals with demanding careers, many in government, Cini said marriage may come under more strain than usual. But with a stable family life still a badge of success, an Ashley Madison subscription may be preferable to divorce, she said.

To be sure, the subscription data may not be that reliable.

A former employee sued Avid Life, saying she had developed debilitating wrist pain, insomnia and anxiety while writing 1,000 fake profiles for a Brazilian version of Ashley Madison, according to court records. The case was dismissed earlier this year.

Still, one Ottawa resident, who declined to give her last name, said it is unsurprising the small government town is home to so many Ashley Madison clients.

“In a blue collar city, they’re not going to use a website, they’re going to do it at a bar,” said Kary, 38. In Ottawa “you can’t run the risk of someone seeing you at a bar doing that.”

The town is also not famed for its rollicking social scene.

“Why do you think everyone goes to Montreal to have a good time?” she added. “Ottawa is the city fun forgot.”