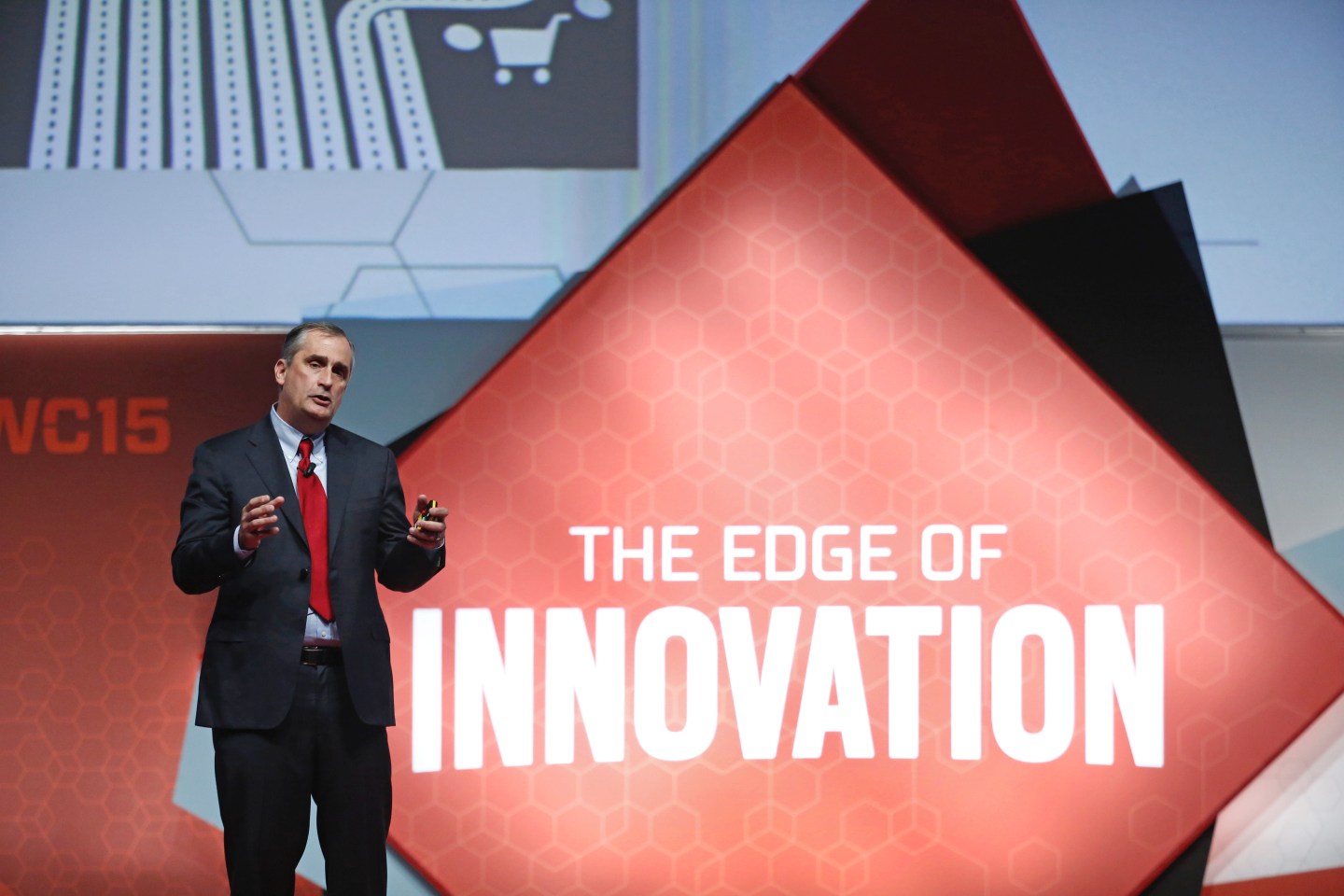 Brian Krzanich, chief executive officer of Intel Corp., speaks during a keynote session at the Mobile World Congress in Barcelona, Spain, on Wednesday, March 4, 2015. The event, which generates several hundred million euros in revenue for the city of Barcelona each year, also means the world for a week turns its attention back to Europe for the latest in technology, despite a lagging ecosystem. Photographer: Simon Dawson/Bloomberg via Getty Images
Photograph by Simon Dawson — Bloomberg via Getty Images

Intel (INTC) didn’t hit the cover off the ball last quarter, but it didn’t matter, because it did better than expected. For its second quarter, the chip giant reported earnings 55 cents per share, which were flat year over year, but handily beat consensus estimates of 50 cents per share. This counted as good news for a skittish market.

For its second quarter, the company logged revenue of $13.2 billion down 5% from last year. Analysts had expected $13 billion. Profit was off about 3 percent to $2.7 billion from $2.8 billion last year.

Investors, worried by persistent sluggish PC-and-laptop sales, were apparently relieved, sending Intel shares up 4.38% to $30.99 per share just after Intel posted its earnings release. On Tuesday, Bernstein Research analyst Stacy Rasgon downgraded Intel to underweight from market perform and lowered his price target to $25 from $29.

As the earnings call kicked off Intel CEO Brian Krzanich said the downturn in the PC business was somewhat offset by 10% growth in the company’s data center business which turned in revenue of $3.9 billion for the quarter. Revenue from the Internet of things group was up 5% to $559 million year over year.

Intel is devoting more resources to the data center business, one big reason it decided to plunk down a whopping $16.7 billion to buy Altera, a maker of programmable chips. These processors are in demand by massive infrastructure providers like Microsoft (MSFT), Google (GOOG), Facebook (FB) and Amazon (AMZN). All of those companies want flexible hardware that can be upgraded via software downloads as opposed to hard-wired chips that have to be ripped out and replaced to add functionality.

The combination of weak laptop and PC sales—two categories dominated by Intel—and surprise news earlier this month that Intel president Renee James was leaving the company prompted investor queasiness going into Wednesday’s call. This story will be updated as the call continues

As for the year ahead, folks who hoped for better news on the PC-and-laptop front were disappointed, with Krzanich predicting that this market will remain flat in the long run. Intel’s plan is to parlay faster growing data center, NAND flash memory, and Internet of things segments to make up for that.