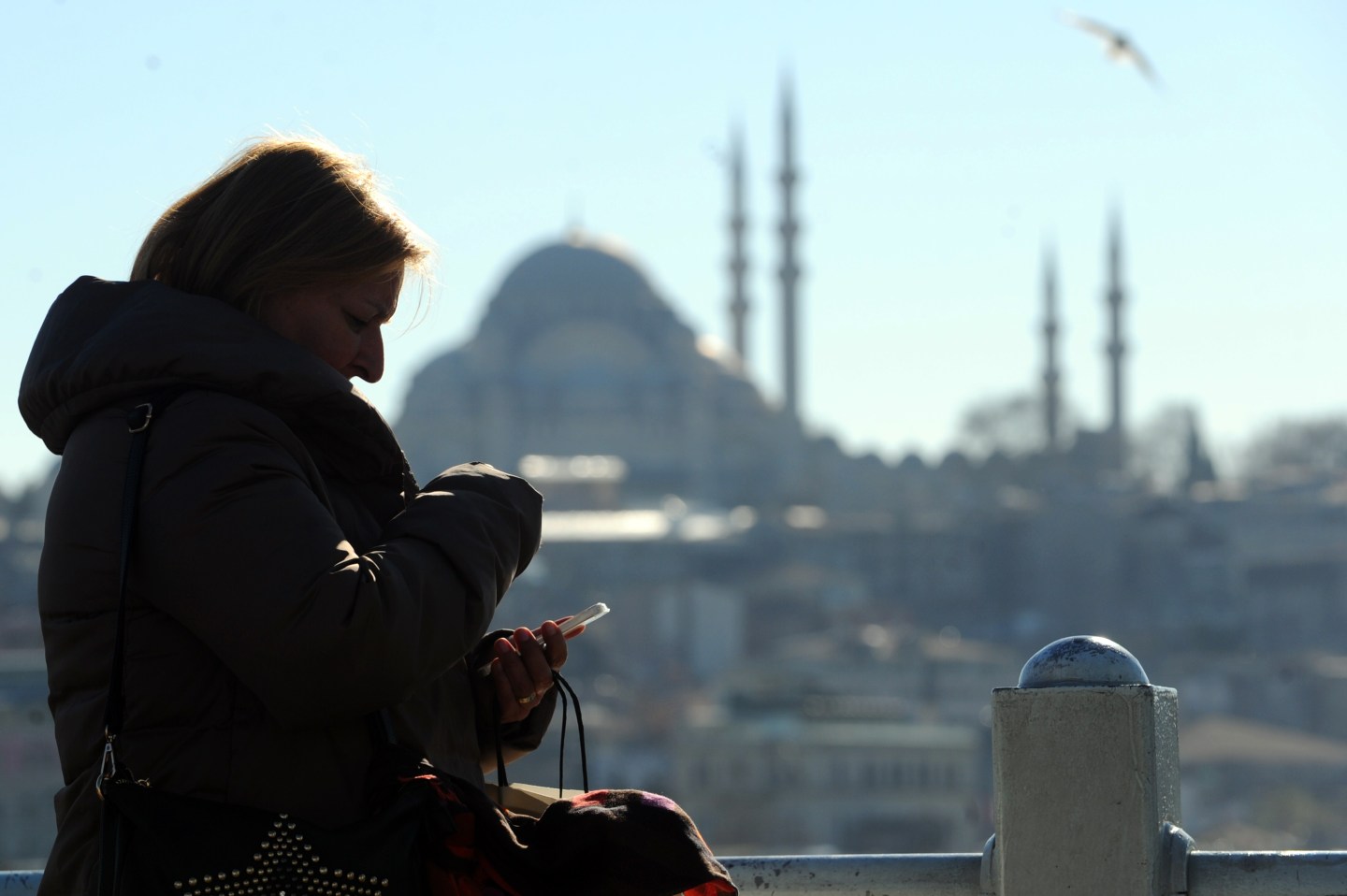 A Turkish woman looks at her smartphone in the Eminonu district of Istanbul, with the Suleymaniye mosque in the background, on March 21, 2014. Turkey's combative prime minister warned March 21, 2014 that he would eradicate Twitter in the wake of damaging allegations of corruption in his inner circle that have spread across social networks in recent weeks. "We will wipe out Twitter. I don't care what the international community says," premier Recep Tayyip Erdogan said at an election rally in the western province of Bursa. AFP PHOTO / OZAN KOSE (Photo credit should read OZAN KOSE/AFP/Getty Images)
Photograph by Ozan Kose — AFP/Getty Images

Cell phones help us with so many of the little problems we encounter each day. But what if the devices could also help with a massive—and potentially deadly—problem: domestic violence?

That’s the idea behind the Turkish “Easy Rescue” app, which is designed to connect victims of domestic violence to emergency services, including police, ambulance and government hotlines, without alerting their assailant to fact that the user has called for help. To activate the app, women simply have to shake their phone. So far, at least 100,000 women have used Easy Rescue and more than 250,000 have downloaded it.

Domestic violence is a pressing issue in Turkey. According to figures from the Turkey Ministry of the Interior, more than 28,000 women in the country were exposed to violence in 2013, and 802 have been killed in the past five years as a result of domestic violence.

The app was developed by mobile technology company Vodafone Turkey, and represents the company’s commitment to “use mobile for good,” says Gizem Kececi, director of corporate communication and diversity. “We aspire to create positive social change through mobile services,” says Kececi.

Designing an app that would allow women to discreetly call for help was only part of the challenge faced by Vodafone. The real trick was finding a way to alert Turkish women to the existence of the app without cluing in men at the same time. “To achieve the full potential of the Easy Rescue service, women need to be encouraged and supported to come forward earlier,” says Bilge Ciftci, brand and marketing strategy director at Vodafone Turkey. “But reaching those women who are under the control of men was challenging.”

Working with global advertising agency Y&R, Vodafone adopted a strategy that would allow “secret communication” about the app to and among women, Ciftci says. As part of the campaign, the company created video tutorials on topics of interest to women—cosmetic tips, for instance—and embedded messages about the app within the videos. Campaign designers were careful to place the messages about the app far enough into the video that men were unlikely to overhear or stumble across them.

To help attract more women, the cast members appeared on several morning TV shows to promote the videos. The company also designed and distributed special labels for women’s underwear, bikinis and wax strips that directed women to the site. Finally, the team sent SMS messages to female cell phone owners and created viral videos to encourage women to share information about the app with their female friends and relatives.

Y&R Istanbul won a Grand Prix award at last month’s Cannes Lions International Festival of Creativity for its work on discreetly promoting the Easy Rescue app. “The app is a result of a corporate campaign aiming to solve a major social dilemma, making best use of mobile technology that can change our lives,” says Arzu Ünal, CEO of Y&R Istanbul. “The app is a perfect example of how technology, media and good ideas dance together in harmony.”