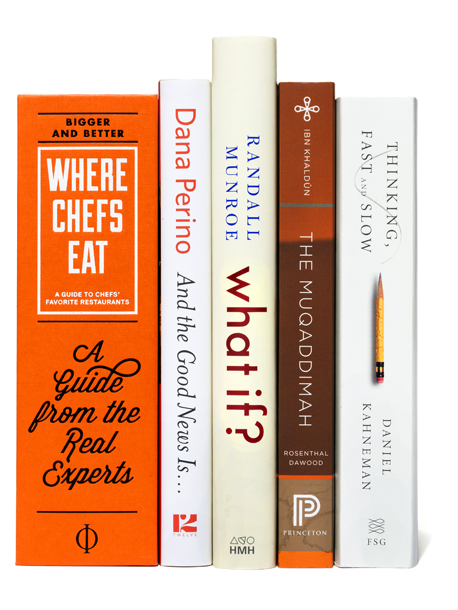 WHERE CHEFS EAT, THE MUQADDIMAH, WHAT IF?, AND THE GOOD NEWS IS? AND THINKING FAST AND SLOW
Photograph by Manfred Koh for Fortune Magazine

Summer vacation, in theory, is a time to take a break from thinking about the office. In practice, it’s a time when many executives broaden their horizons beyond the office—the better to crush the competition when they go back to the office. In that spirit, here are the top non-business picks from business-world leaders.

The Muqaddimah: An Introduction to History — by Ibn Khaldûn

Last New Year, Zuckerberg announced his intention to read an important book every other week in 2015. So far the 31-year-old exec’s picks have focused on history and sociology. This summer’s selection was written by an Arab historian in 1377 (and reissued this year). One scholar called the book, one of the earliest critical studies of history, “the greatest work of its kind that has ever yet been created by any mind.” In other words, beach reading.

The Girl on the Train — by Paula Hawkins

There’s more to life than the financial pages. Though a spokeswoman for Nicholson says she regularly reads business media, at the recommendation of a co-worker, Nicholson just purchased The Girl on the Train, to read on her Kindle. The bestseller, about the disappearance of a woman with a seemingly perfect life, has won wide plaudits from critics, some of whom have called it the most compulsively readable thriller since Gone Girl.

This summer Comstock plans to read Kahneman’s bestseller about human reasoning, which delves into the ways our unconscious minds can affect even “rational” thinking. Comstock tells Fortune that she’s a “student of human behaviors and motivation” (as befits a marketing executive). She also says she’s a “big fan of Kahneman’s work,” and in that she’s hardly alone: The psychologist and Nobel Prize winner also counts other CEOs and President Obama among his readers.

What If ?: Serious Scientific Answers to Absurd Hypothetical Questions — by Randall Munroe

Gates, who’s often a book-a-day reader when on vacation, is recommending lighter fare this summer. This illustrated 2014 tome by the author of the web comic “xkcd” ponders such far-out scientific questions as, “What would happen if you made a periodic table out of cube-shaped bricks, where each brick was made of the corresponding element?” Answer: The human race would essentially be wiped out. It’s funnier than it sounds.

Where Chefs Eat: A Guide to Chefs’ Favorite Restaurants — by Joe Warwick

Every summer J.P. Morgan conducts a company-wide survey of the best summer reading books (including contributions from Erdoes and CEO Jamie Dimon), which Erdoes’s team then sends to J.P. Morgan’s wealthy clients. The list originally focused on finance, but these days it also includes titles about how to spend your time and money. Among this year’s choices: the 2015 edition of this dining guide, which compiles tips from chefs and restaurateurs about their favorite eateries in cities from Chicago (molecular gastronomy hub Alinea) to Cape Town (locavore favorite Superette).

And the Good News Is … : Lessons and Advice from the Bright Side — by Dana Perino

In 2008, Rove held a contest with then-President George W. Bush to see who could read the most books over the course of the year. (Rove won, but not by much.) Today the GOP operative’s Twitter feed is packed with book picks. This summer he points to the new memoir from Perino, Bush’s former press secretary. “Dana offers invaluable life and work advice,” Rove tells Fortune. (Perino also writes that Rove, her White House colleague, was “so nice and approachable.”)

The Discoverers: A History of Man’s Search to Know His World and Himself — by Daniel Boorstin

It’s hard to get a lot of reading done, even in the summer, when you’re at the helm of one of Wall Street’s largest banks. In a recent company podcast Blankfein joked that he’s been reading Boorstin’s 768-page tome, a sweeping history of science and human understanding, a few chapters at a time for 18 years. “I learn a lot from it, and I’ll probably be reading it for another 18 years,” he says. Next? Boorstein’s The Creators, which the CEO predicts will take him “another 30 years to read.”

A version of this article appears in the July 1, 2015 issue of Fortune magazine with the headline “A Summer Break from Business Books.”