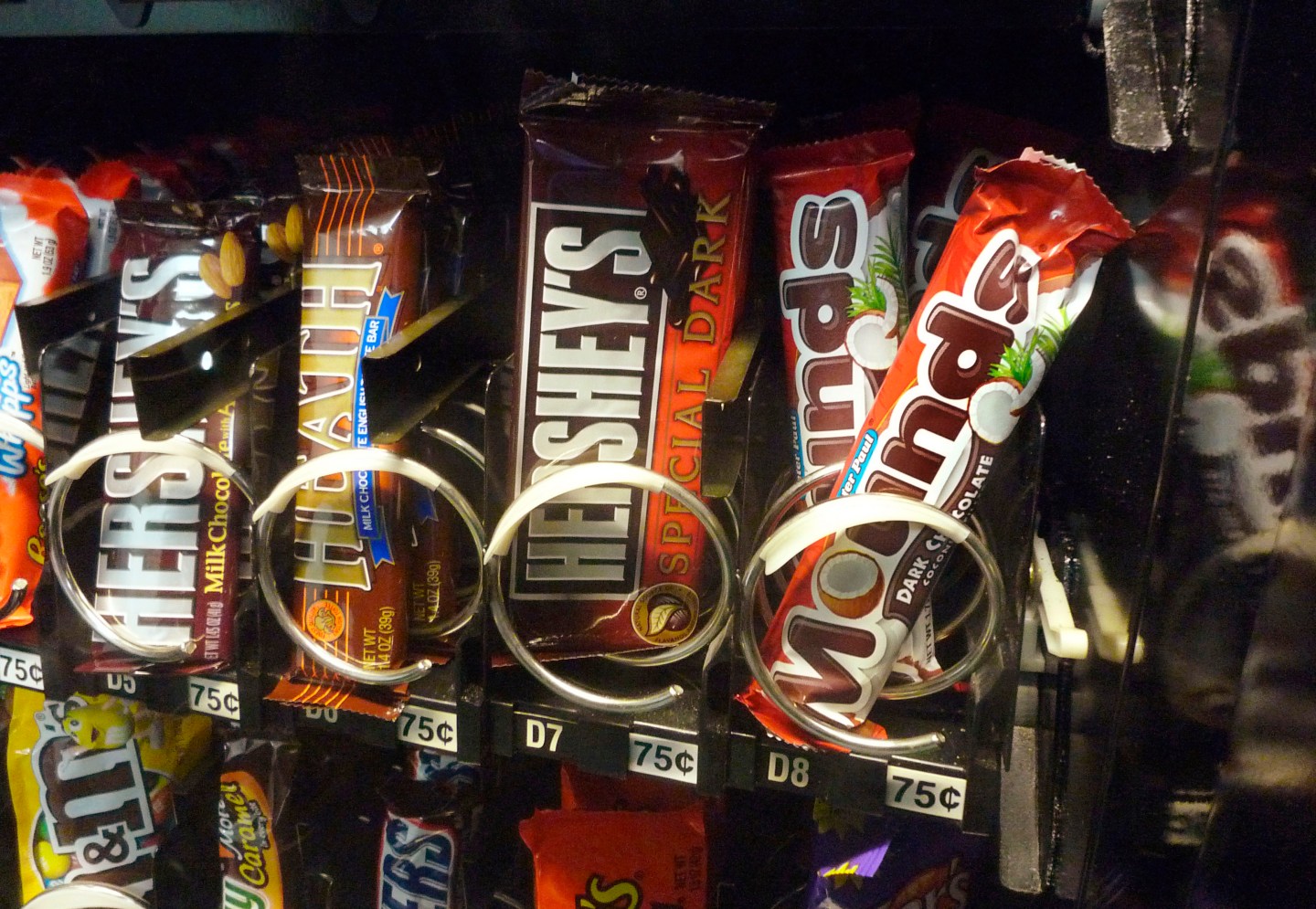 A row of candy bars manufactured by Hershey is seen in a vending machine in Washington June 17, 2008. Hershey cut its long-term earnings growth target on Tuesday and laid out a strategic plan to boost its biggest brands in the United States with more advertising and tighten development of new products. In unveiling the plan to analysts the largest U.S. chocolate company acknowledged that attempts to move into areas like cookies and snack bars hurt its mainstay products like Hershey bars and Reese's peanut butter cups. REUTERS/Jim Bourg (UNITED STATES) - RTX71KW
Jim Bourg / Reuters

A cashless world is threatening extinction to a machine that we see all the time in office buildings, airports, gas stations —vending machines. As more people use credit and debit cards, vending machines need to catch up with technology or risk becoming a relic.

PayRange wants to save vending machines from ending up like dinosaurs. The company lets vending machine owners transform their aging machines into ones that can accept payment from people using a smartphone app.

The technology gives new life to the old machines, which would otherwise need to be replaced. The company’s sales pitch is that it’s far cheaper to use its plug-in device than to spend thousands of dollars on a fancier updated model.

On Thursday, PayRange said that it had raised $12 million in new Series A funding led by Matrix Partners, to fuel its expansion.

PayRange’s small device plugs into the back of vending machines using a standard port that is similar to a USB port on a computer. The device costs $49.

People who want to pay using their smartphone must download a PayRange app, add their credit card information, and fund an account. When near a machine, they open the app, select a credit card they want to use, and then choose one of the nearby machines listed on their phone’s screen.

Customers enter how much they will pay and then press the usual vending machine button to buy their Coke, Mars bar or bag of chips. The app then automatically shows customers an updated balance in their account.

PayRange’s device picks up wireless signals from nearby smartphones by using Bluetooth technology. No personal information is sent to the machine, and credit card numbers are managed by a processor that is compliant with industry security standards, says PayRange.

Patel, who previously founded a traditional vending machine company, argues the need for his technology by pointing to the 80 million consumers in the U.S. still buy daily from approximately 8 million machines nationwide. People spend $45 billion in vending machines annually. Yet, 98% of those purchases are made with cash because only 5% of vending machines accept credit and debit cards.

In order to market its devices, PayRange has partnered with Vistar, a privately owned company that distributes food and other products to vending machines. Patel says in the past six months, PayRange’s devices have been distributed to 700 operators that manage 1 million vending machines.

In addition to the one-time cost for its equipment, PayRange makes money by charging vending machine operators a 3.95% commission on each item sold using the company’s app.