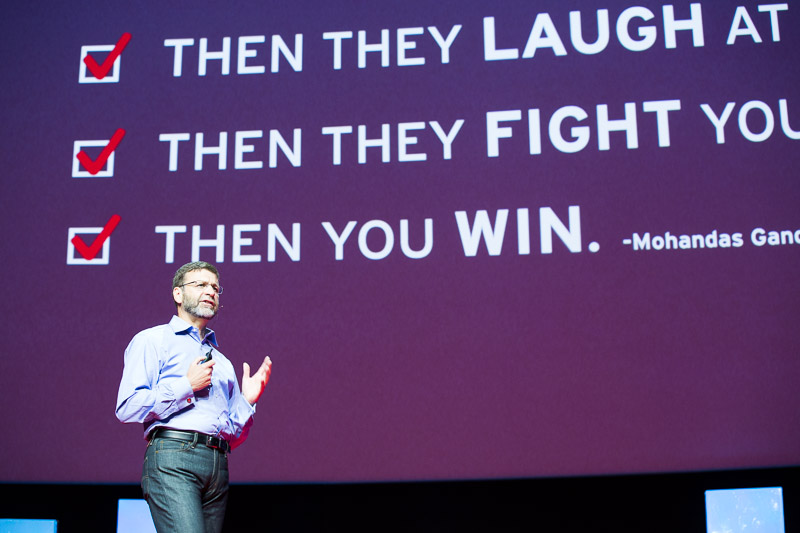 Most big companies are now also technology companies, whether they manufacture cars, churn out widgets, or reap billions on stock trades. They use their own technological prowess to build software both for internal use and to interact with customers or partners.

The growing belief that Company A can boost profits by designing, testing, and deploying better software faster is one that Red Hat (RHT) will parlay to sell its new OpenShift Enterprise 3.0 software, used to create and manage applications.

This release of OpenShift, traditionally known to techies as a platform-as-a-service or PaaS, hits lots of buzzwords. First, it embraces the popular Docker container technology. That means a developer can, theoretically, build an application, test it, and run it in its own server room or on a variety of clouds. Second, it supports Kubernetes, an orchestration scheme backed by Google (GOOG) that promises to ease the placement and management of lots and lots of containers across environments.

With OpenShift, Red Hat hopes to repeat the success it’s seen in Linux where Red Hat Enterprise Linux (RHEL) dominates. There’s nary a Fortune 500 company that doesn’t use RHEL. But adoption of OpenShift (or any PaaS for that matter) is far less universal. Some skeptics say that the concept of a PaaS is overkill, that the advent of Docker renders the need for a full platform moot.

Sure, General Electric(GE) is all-in with Pivotal Cloud Foundry, (an OpenShift rival) but it paid more than a $100 million for a stake in Pivotal, the spin off of VMware (VMW) and EMC (EMC). Presumably when GE was weighing its buy-vs.-build options, it landed firmly on both sides. Not many other companies are making such big bets.

Face it, the tech terminology didn’t help. “PaaS” was a term that marketers could love but induced eyerolls from anyone else. That may be why vendors are starting to downplay the P-word altogether. Thank goodness.

At the Red Hat Summit in Boston this week, Ashesh Badani, general manager of Red Hat’s cloud business unit, acknowledged that the term PaaS itself can be a distraction. “We’re in the post-PaaS era,” he noted. People should focus on what the technology does for customers, not on *aas acronyms, seems to be the feeling.

“People use OpenShift to extend what they’re doing. Everyone is doing bespoke work to extend their own product development frameworks.” By building atop Docker, Red Hat can tap into a vast well of developer expertise, and tools that are built for Docker can be re-used.

Microsoft launched Azure, in early 2010 as a PaaS, later adding capabilities comparable to the basic “Infrastructure as a Service” building blocks offered by Amazon Web Services starting four years earlier. Asked about the relationship between the earlier Azure and the newer iteration, Mark Russinovich, CTO of Azure, said the fundamentals are changing, or at least the way they’re viewed is shifting.

“We rethought the layering of the compute platform so it’s not an IaaS or PaaS discussion but a discussion about the capability of the virtual machines,” said Russinovich.

The presumed benefit of using OpenShift or Cloud Foundry or Azure in this app development scenario is that companies churn out better code, faster. So if the marketing department needs a new customer-facing widget, it’ll take days not weeks or months to deliver.

And how’s that working out? Well, didn’t I mention this is a new category? Rob White, head of application hosting engineering at Barclays, the giant U.K. bank, said development is easier with OpenShift, but it’s still not easy. Or particularly fast.

“It took three to four months to get our first production app and things are still slow—we’re still handholding. The payment app is the one we really want and once it’s up we’ll be more confident and things will go faster.”

“The second app was much faster than the first,” said Murphy.