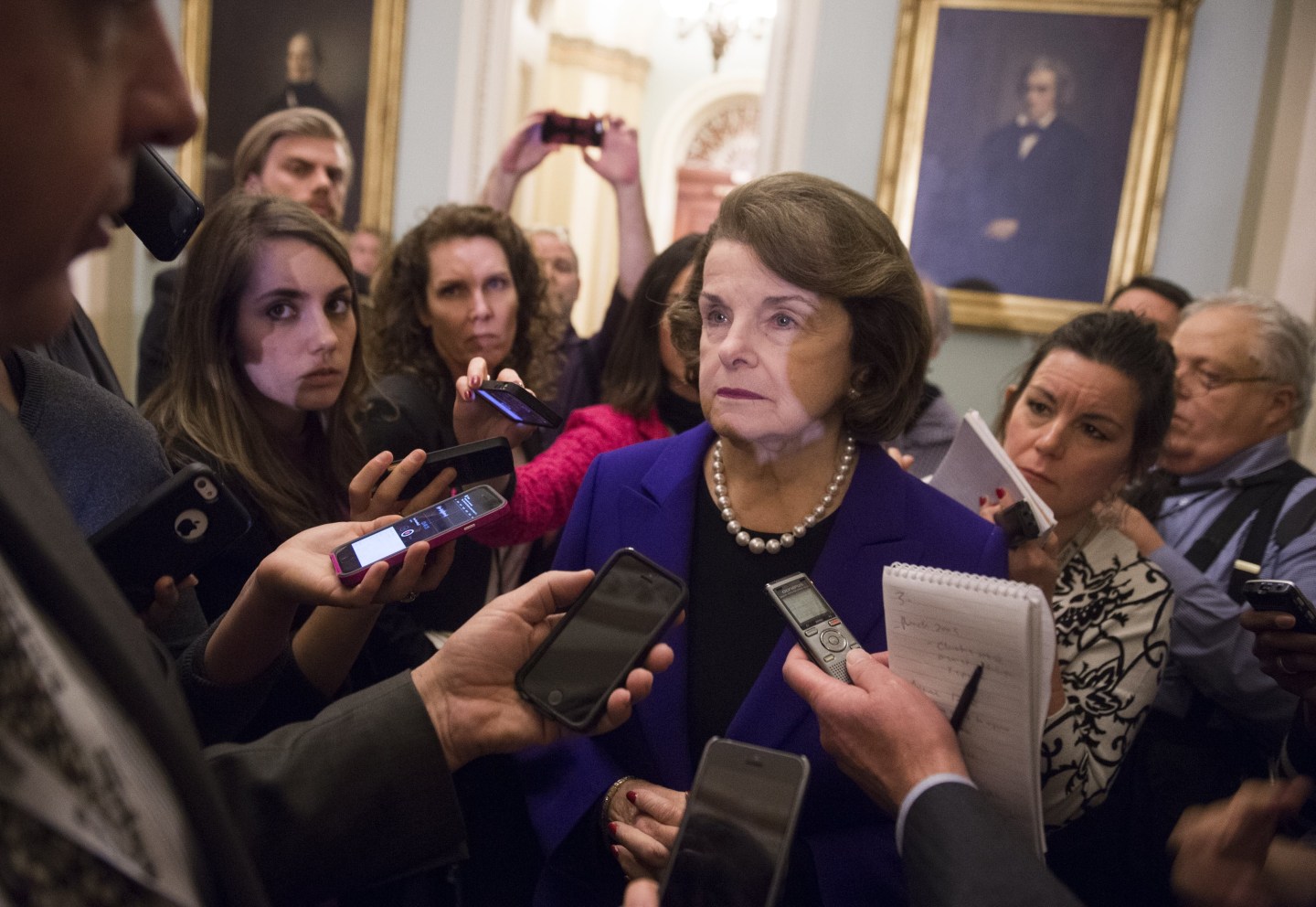 Senate Intelligence Chairwoman Dianne Feinstein (C), a Democrat from California, speaks to reporters about the committee's report on CIA interrogations at the US Capitol in Washington, DC, December 9, 2014.
Photograph by Saul Loeb — AFP/Getty Images

With a wealth of aerospace engineering talent located in the south and Silicon Valley’s software programming talent up north, California has quietly grown into a hub for the growing U.S. drone industry. But, some in the industry are worried that a bill put forth by California’s own Sen. Dianne Feinstein could push the brakes on innovation by placing onerous restrictions on consumer drone technologies.

Under pressure from Feinstein, the FAA recently released data showing 190 incidents during a nine-month period in 2014 where unauthorized drones were sighted by members of the general aviation community operating in areas where they were not authorized. Of those, some two dozen were reportedly described as close shaves, where a mid-air collision was narrowly avoided. In response, Sen. Feinstein has introduced the Consumer Drone Safety Act, which would create stricter federal laws governing consumer drone operations and require safety features to be incorporated into new consumer drones. “If we don’t act now, it’s only a matter of time before we have a tragedy on our hands,” Senator Feinstein said in a statement.

While many industry advocates dispute the meaningfulness of the FAA’s incident data, they’re more concerned about the fallout from what they see as legislative overkill. “There’s potential for this to turn into a rather draconian set of limits on both the user and the manufacturer,” says Brendan Schulman, head of the Unmanned Aircraft Systems practice at New York City-based law firm Kramer Levin Naftalis & Frankel.

At issue for Feinstein, it seems, is the fact that while the FAA has moved to heavily restrict and regulate drones flown for commercial purposes, drones flown recreationally are governed more or less by a set of non-regulatory best practices, rather than by federal law. The Consumer Drone Safety Act aims to create federal regulations regarding when, where, and how consumer drones can be operated, as well as require that new safety technologies be built into all new drones.

These include collision-avoidance technology, transponders that signal a drones location to air traffic controllers and other aircraft, and geo-fencing—technology that creates a GPS virtual fence around no-fly zones that would prevent the drone from entering areas near airports or other restricted airspace. The bill also calls for “anti-tampering” safeguards that would prevent users from modifying consumer drones after they are purchased.

However, some of these technologies are already emerging from within the industry. Geo-fencing technology is already built into the latest iteration of Shenzhen, China-based DJI’s popular consumer drones, which make up more than half of the consumer drone marketplace. Startups like AirMap provide consumer and commercial drone operators alike with a bevy of information about restricted airspaces and other localized regulations based on where an aircraft is flying.

Still other technologies—like collision avoidance or so-called “sense and avoid” technologies—are still being developed by drone manufacturers, creating something of a cart-before-the-horse problem for manufacturers and regulators should the Consumer Drone Safety Act be passed into law. Besides questions about technological feasibility, industry advocates also worry that such a policy would kill innovation in a new industry that’s predicted to be worth tens of billions to American companies over the next decade.

“If you were to incorporate all of these technologies on consumer drones, I don’t know if they would be affordable anymore,” Schulman says. “And that’s going to put a lot of these new startups out of business.”

These startups range from any number of small, crowdfunded drone makers to growing commercial ventures with millions in venture backing and revenues like DJI, France-based Parrot, or Silicon Valley’s own 3D Robotics (3DR). For a company like 3DR that has staked its business model on an open platform that encourages users to tinker with its products’ software and hardware, the bill’s anti-tampering provisions are doubly damaging. Such restrictions would drive up development and manufacturing costs as well as stifle innovation among the company’s users.

The onus to create safe consumer drones does fall on the industry, says Jesse Kallman, director of business development and regulatory affairs for Airware, a San Francisco-based startup focused on the software side of commercial drones. But, in many respects, the industry is already doing many of the things the bill mandates without subjecting itself to burdensome—and somewhat misguided—technology imperatives.

“I think a lot of the responsibility does fall on the manufacturers, and we do need to think about safety from the very beginning and bake it into the product,” Kallman says. “So, I think there are benefits to this bill in terms of creating a safety mentality.” But, he adds, there are several aspects of the bill that are going to be tough to implement and enforce, especially for the FAA whose budget and manpower are already stretched very thin. The larger problem, he says, is the wide availability of the technology and the relatively narrow scope of opportunities for new users to educate themselves.

“It’s a new market, it’s really easy to get your hands on this stuff, and users aren’t educated,” Kallman says. “Education is the biggest thing we can do for the industry. Imposing a bunch of technology restrictions doesn’t make sense in a lot of cases.”

Some of the technologies that the bill would require manufacturers include in their products are still in their infancy, says Lisa Ellman, Co-Chair of the Global UAS Practice at the Washington, D.C. office of law firm Hogan Lovells. The legal expert, who also was a one-time policy advisor to the Obama administration says, that the bill, if passed, could derail the development of the very technologies it’s pressing the industry for.

This type of disconnect between government officials and the industry, perhaps, best embodies the ongoing regulatory conflict that’s taking place in the drone industry these days. The drone industry has formed its own lobbying group, the Small UAV Coalition, which includes such deep-pocketed backers as Amazon and Google (Airware, Airmap, DJI, and 3DR are all also members) to represent its side of the argument on Capitol Hill. How effective the industry is at pushing pro-regulation legislators like Sen. Feinstein toward a middle ground will have a lot of impact on what the future U.S. drone industry looks like.

“I’m in agreement with the spirit of the bill,” Ellman says. “But being prescriptive about what technologies manufacturers should include are things that industry and policy makers are already working on now, and it doesn’t make sense to get in the way of that. We want to enforce safety without inhibiting innovation.”