Greece’s best weapon for an economic recovery? Its good looks. 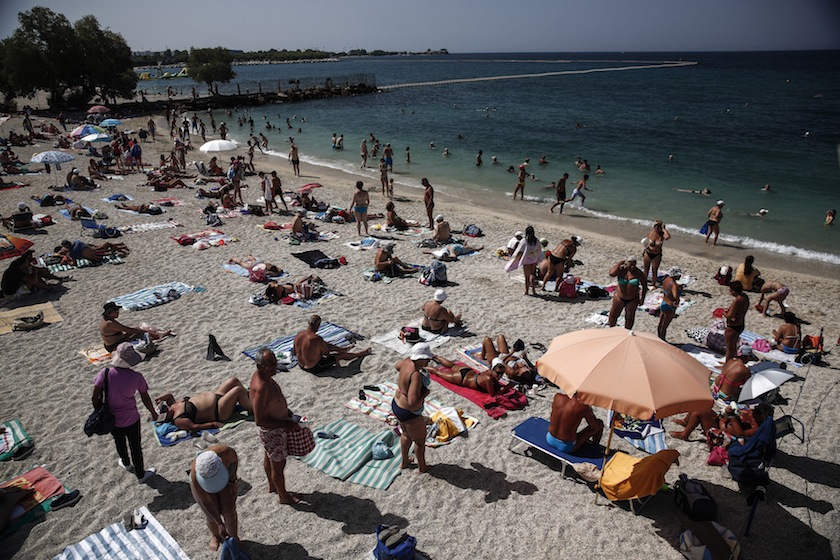 From the classical ruins of Athens to the black volcanic hills of Santorini, Greece is a timeless treasure for tourists. Greece’s good looks has prevented the total collapse of the nation’s economy and it offers the best hope for its recovery.

That conclusion was made clear in a report released on Friday by Alpha Bank, Greece’s fourth largest lender. Naturally, the study is full of the disastrous data that dominates the headlines—rampant deflation, a 24.5% unemployment rate, and government coffers depleted by retirees in their 40s and 50s collecting generous pensions.

Still, the Alpha report reveals that while everything around it is unraveling, Greece’s biggest industry––tourism––is in the middle of a boom. The number of foreigners visiting its cities, ports, and islands rose from 17.9 million in 2013 to well over 22 million last year, and revenues from tourism grew over 10%, to almost $15 billion. In a $200 billion economy, an increase of around $1.3 billion is a big deal.

Momentum is building. As Alpha reports, the Greek tourism association states that foreign arrivals at Greece’s airports surged 29% in the first quarter of 2015.

It’s easy to forget that, after shrinking for six years, the Greek economy actually expanded 0.7% in 2014 and even posted a tiny gain in the first quarter of 2015. Tourism is bucking declines in government spending and construction activity to provide a major boost.

So why is this single industry shining? The big factor is a sharp rise in visitors from outside the Eurozone, especially the UK and the U.S. The Americans and Brits are coming because the fall in the euro versus the pound and dollar is making Greece’s hotels and restaurants a far better deal today than in 2012 or 2013. In those years, and well before, Greece lost hordes of tourist traffic to cheaper, non-euro resorts in Israel and Turkey.

Today, Greece isn’t cheap, but it’s more the way Americans, Brits, and pre-euro Europeans remember it; it’s a good deal for vacationers. It began to lose that edge when it adopted the euro in 2001, and that’s been fading until the recent, remarkable recovery.

Imagine how much of a boom the tourism industry would experience if French and German tourists began to view a holiday in Greece as a bargain.

Indeed, Greece’s tourism turnaround contains a lesson about the dangers of an overvalued currency. If the market, rather than a central authority, were setting Greece’s exchange rate, the nation’s currency would be at least 30% cheaper than it is now, compared with, say, the Deustche Mark. The rub is that Greece, while a better deal for Americans and the British, is still overpriced for Eurozone tourists. If Greece were to leave the euro and effectively devalue its currency, revenues from tourism would explode, and that growth would help offset the inevitable bankruptcies and drag from the rising cost of imports.

To be sure, tourism is far from the only critical factor in weighing a Grexit. But what’s happening illustrates a basic truth: Greece’s “currency” is hugely overvalued. It needs to restore its brand as a bargain destination to thrive again.

The surge in tourism from the weaker euro is already making that point.

More on Greece from Fortune:

Saving Greece: Athens is counting on Angela Merkel to save the day