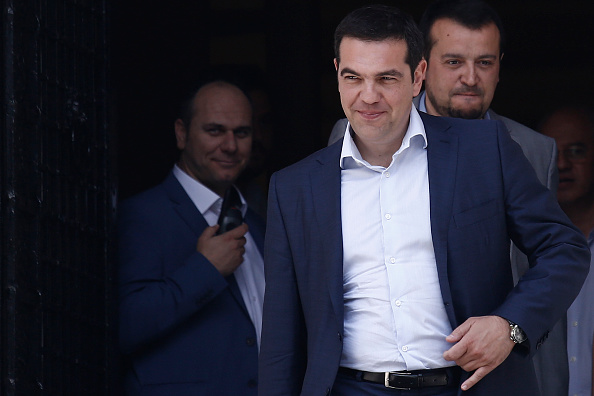 Greece’s left-wing Prime Minister Alexis Tsipras was back to his firebrand best Tuesday, delivering a blood-and-thunder tirade against his country’s creditors before lawmakers in Athens. Here’s a few thoughts on whether today’s barrage means anything different from those that have gone before.

What we’ve suspected for months: the Syriza-led government in Athens has planned for this moment all along as it has no leverage over its partners until it’s clear how much they will be hurt by a Greek default and/or exit (this would go some way to explaining the lack of seriousness and detail in most of the alternatives it has proposed to the creditors’ austerity measures since February). Markets are starting to ask whether other fragile Eurozone economies, some of which have only just emerged from bailouts themselves, could really cope with the shock: Portugal’s 10-year borrowing costs have doubled since mid-April, Italy’s have nearly matched that. Even if that’s not all down to Greek contagion (the deflation scare appears to have ended too), and even if absolute borrowing costs are still four percentage points or more below the crisis levels of 2011, Europe’s Treasuries know the signals and won’t like what they see. Tsipras will be hoping that the so-far united front of the 18 other Eurozone members will crack under the pressure of market volatility.

2. A mass assault on the creditors

Tsipras’ tactic for most of the last four months has been to play the creditors–Eurozone governments, European Central Bank and International Monetary Fund–off against each other, flirting with selective default on one or the other but not all at once. However, in Tuesday’s speech, he rounded on all three at once in remarkably brutal language, accusing the IMF of “criminal responsibility” for the current state of the Greek economy and the ECB of “financial asphyxiation” tactics. The lenders had closed ranks two weeks ago, drawing up what they hoped were “final” proposals for extending Greece’s bailout beyond the end of June. It looks like Tsipras has given up trying to divide them, at least for now.

As the BBC’s Duncan Weldon points out, this kind of language suggests Tsipras isn’t afraid of Greece’s banking system collapsing in the next few days: the tone would otherwise be more moderate. But that line of thinking does, however, contradict a report in the German Sueddeutsche Zeitung that European leaders were preparing an emergency summit and capital controls as early as this weekend. Perhaps Tsipras was emboldened by ECB President Mario Draghi telling the European Parliament Monday that: “The assessment of the (ECB’s banking) supervisor is, at this stage: Greek banks are solvent and the collateral they provide is adequate,” which most took as a signal that the ECB won’t impose capital controls on Greece’s banks unless they have a clear political mandate from Eurozone politicians.

4. Giving as good as he’s getting

Greek politics is a disconcerting echo chamber but, as ever, Tsipras’ comments aren’t made in a vacuum. Earlier Tuesday, European officials made their most candid admission yet that they were working on contingency plans for a “Grexit”, breaking a taboo that has held for a surprisingly long time in what Eurocrats like to think of as the heart of their ‘Ever Closer Union’. European Commission VP Valdis Dombrovskis told a news conference that there are “some discussions…(about) less favorable scenarios,” while Belgium’s finance minister Johan van Overtveldt said Monday that “the attitude taken by the Greek government obliges us to look at other options, of which, at the most extreme, Grexit is one.” What with those comments and the Sueddeutsche’s report, Tsipras may have felt that he needed to respond to the escalation in rhetoric.

5. Preparing the ground for a retreat

Tuesday’s comments were harsh and confrontational, but don’t take them at face value. Tellingly, he talked about serving a full term in government, which suggests that he at least, among the Syriza ranks, isn’t looking for a glorious political martyrdom. That, as much as anything, suggests that he still wants a deal. In truth, the gap between the two sides’ positions has been closing: Greece’s most recent proposals importantly accept the need for a primary budget surplus (i.e., before debt servicing) of 1% of GDP. But further cuts to public-sector pensions and increases in VAT on things such as electricity remain sticking points and Tsipras refused to budge on those today. It wouldn’t take much more movement for a deal to be reached. But for Tsipras to sell it to his own followers (many of whom are further to the left), he needs to be seen to have fought all the way. Speeches like Tuesday’s are an essential part of creating that impression.