Do millennial moms really care what Goldman Sachs thinks about them? 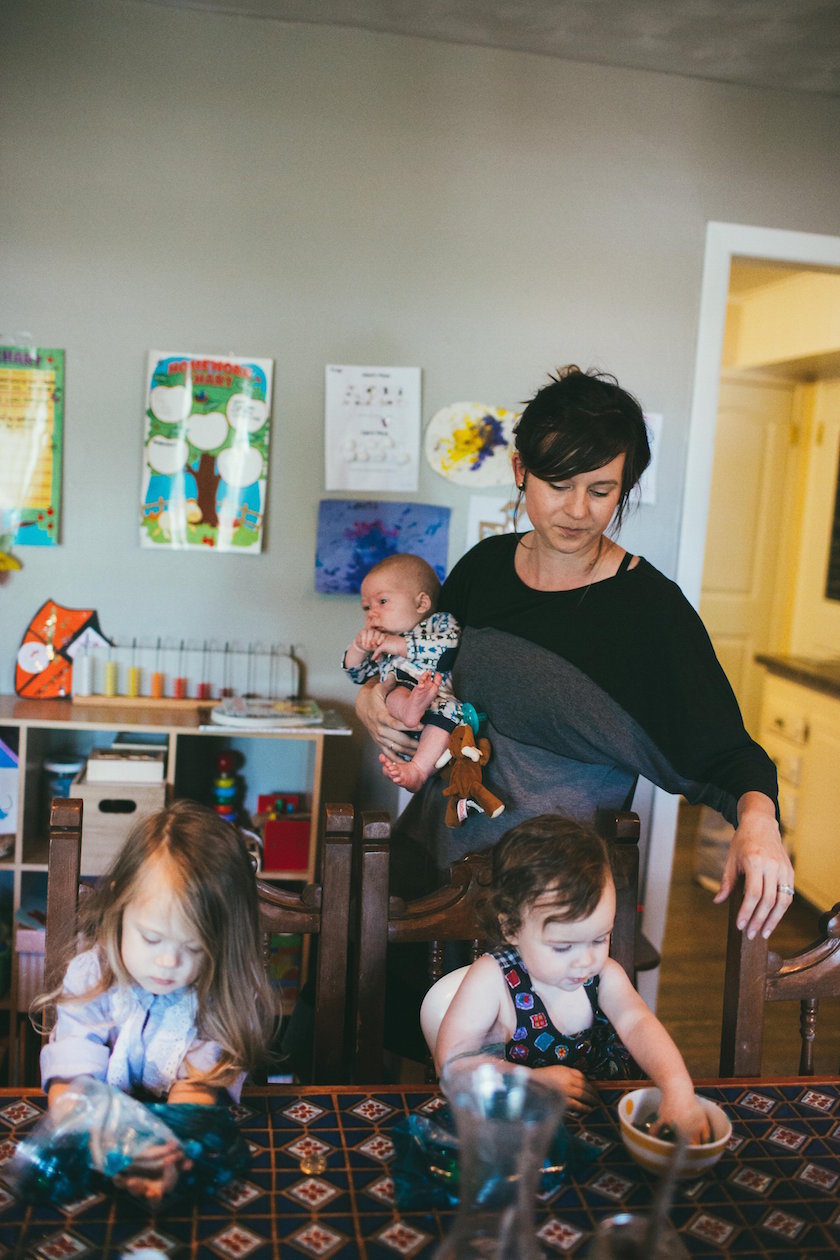 Usually, Wall Street strategists write about trends in cars, steel mills, Chinese trade figures, and other senseless things. The only human character in most brokerage notes is the “U.S. consumer,” a faceless spendthrift who is too abstract and greedy to engender much sympathy.

What is disturbing, however, is when analysts apply the cold calculations of income statements and balance sheets to human lives. Recently, Goldman Sachs published a note entitled “Millennial Moms,” and I wasn’t quite sure what to make of it. The 37-page paper reads like an assignment a midcentury ad man like Don Draper might have given to Peggy Olson: “I want to know everything about the mom born between 1980 and 2000. What does she like? How does she spend her spare time? Where does she shop? What does she feed her kids?”

In a nod to the modern family that doesn’t quite capture the nuances of co-parenting, Goldman’s strategists said early in the note that they were using the words “mom” and “parent” interchangeably. Five of the 12 analysts who signed the note were women. Mining data and conference calls for stats and quotes, their findings painted a portrait of the young parent as a health-obsessed, smartphone-gorging, anti-corporate crafter. The bottom line, according to Goldman, is that a rebound in the number of births will likely increase the $1 trillion a year that American parents spend on their kids, and investors who pay attention to the young parents’ distinctive tastes will profit from it.

The only experts the analysts didn’t quote on the subject were millennial moms (or parents) themselves. So I decided to give them a chance to weigh in and see if a few real-life mothers found Goldman’s note as troubling as I did. One caveat: My informal moms’ group is not necessarily a representative sample. I know most of them from the preschool my daughter attends in Denton, Texas.

As Goldman points out in its note, changes in parents’ tastes have the potential to transform the retail, food-processing, restaurant, and advertising industries. Think about the implications for advertisers as children consume cartoons through Netflix rather than cable.

“[My kids] have no idea what’s out there,” said Raechel Haley, a mother of three. “My mom around Christmas was sad they couldn’t point at the TV and say, ‘I want that I want that’ … I was like, ‘Mom, I am the opposite of sad about that … that’s just a bunch of junk.’ ”

Parents of prior generations have traditionally striven to help their kids to fit in—the bigger the brand, the better. Think families of four sitting in McDonald’s booths, dining on Happy Meals and Coca-Cola, their kids dressed in Levis and Old Navy T-shirts, playing with Barbies and G.I. Joes.

But in Goldman’s vision of the new parenting world, families that could number five or more are sitting in a food-truck park, with their kids wearing clothes made by a local part-time tailor (or by mom) as they play with Lego castles they designed themselves while eating an elaborate kale concoction.

That’s because “fitting in” is anathema to millennial parents.

“They’re wanting their kids to be individuals … when they’re shopping for clothes, they don’t want them to have the same as every other person; they want them to stand out,” said Holly Nguyen, a mother of two.

As Goldman points out (a little creepily), they even give their kids “differentiated and unique” brands—or as you and I would say it, “names.” In 1940, more than 20% of boys born carried one of the five most popular names for newborns that year, Goldman writes. But in 2014, only 4% of boys had one of the top five monikers, which included Noah and Mason.

“I guess non-conformity is the new conformity,” joked Haley, the mother of three. She also noted that she named her youngest child (and her first boy) Huck, in part because she didn’t know any Hucks, and that was the point.

“Expect to see a continued rise of small brands … addressing the unique needs of millennials through a more tailored approach than larger corporate incumbents,” said Goldman’s note. “We see a growing culture of entrepreneurism, enabled by the likes of Kickstarter, Shark Tank and WeWork and empowered by a growing number of success stories among fellow millennials.”

Most of the moms I talked to don’t go to the mall to shop for clothes or toys. They use social media or websites like Amazon to find unusual items they could buy or make for their kids. Among the stocks Goldman recommended based on its reading of the new generation is relative newcomer and independent online retailer Zulily, but it also picked old-school craft store Michaels. When Pinterest—the online community for sharing “creative ideas”—recently added a “buy button,” Michaels was one of its suppliers.

“Eat your greens” must be as old as parenting itself. But millennial parents, according to Goldman’s analysis, may be the first group who actually serve their kids more than a token dash of green in each meal. That’s good news for Whole Foods or Starbucks and bad news for McDonald’s.

“It’s something about food—McDonald’s started testing kale, turkey sausage, and egg-white bowls for about $3 in California. I don’t think it will work because my mind’s eye sees greasy kale, and it automatically thinks—disgusting,” wrote Amanda North, a mother of one, in a Facebook message to me. “However, Starbucks offers a kale and cilantro smoothie that costs about $7, and that somehow sounds good and healthy to me. The price and the establishment both factor into my feelings about the food.”

Starbucks is the only chain restaurant that gets a pass from these parents, according to Goldman. The moms I spoke to said they’d rather go to independent coffee shops, but they did concede one key advantage for the big chain: Starbucks has a drive-through. Distinctiveness may be the first criterion for millennial parents, but convenience is also a priority, and not just for soy lattes. Goldman states—and the parents I spoke with agreed—that next-day delivery, or something pretty close, has become almost a prerequisite for online shopping.

The only big quibble my informal focus group had with Goldman’s analysis concerned millennials’ supposed relationship with technology and how it mediates their human relationships.

Goldman describes the millennial generation as the first “digital natives,” meaning they have grown up around technology and are completely at home with it. The strategists even go so far as to say millennials are more “trusting.” That, according to Goldman, is because they have embraced the “sharing economy,” in which strangers do business directly with strangers through sites like Uber and craigslist and record their lives for the world to see on Facebook and Twitter.

My moms agreed that they spend a lot of time on their smartphones (an average of 1.7 hours a day compared with 1.2 hours a day for Gen-Xers, according to Goldman). They’re online shopping and just hanging out—digitally—with friends, and most of them like sharing family moments on social media. But they do not embrace technology, or trust it, as wholeheartedly as Goldman suggested.

Celina Cordova, a mother of one, said the way she thought about Facebook and Uber was shaped by her Hispanic culture and her upbringing as much as it was by her generational peers.

Cordova said she did not display logos on her son’s clothing, but not because of a generational aversion to big brands. Her parents had brought her up to be humble about her belongings.

Stephanie Pugh Haass writes a blog about parenting her twin youngsters. (She also taught at my daughter’s preschool). And yet she has conflicted feelings about technology. For kids, she feels it can be “insidious.”

While Pugh Haass often works and reads online herself, “I also see that it’s addictive to me, and I have a frontal lobe that’s developed, and so I can distance myself from it. But my children can’t, and why do that to them?”

In the end, I would say my team of counter-analysts didn’t find Goldman’s note as disturbing as I did. In fact, overall they rated its research as a buy, if not a strong buy. The bank’s analysts tapped into the sense that these parents are raising their kids in a very different way—and spending money on very different things—than their own parents had.

At the risk of making a sweeping statement based on a very limited sample, perhaps people a generation younger than me are more comfortable with corporations siccing algorithms on them to predict their behavior. Otherwise, how would Google and Facebook stay in business?

“I think they were pretty dead on,” said Haley, “and I’m excited to see the new products that come out based on it.”