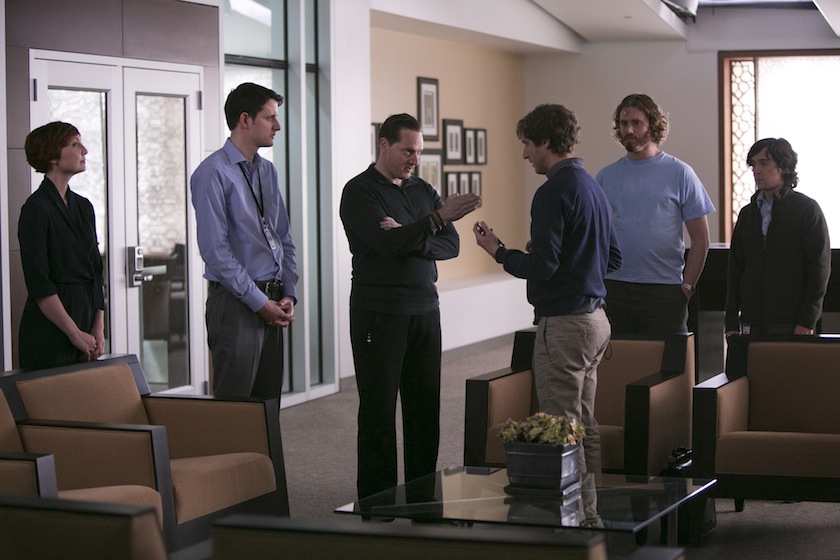 Unlike so many of the characters on their show, the team behind HBO’s “Silicon Valley” does not profess a desire to change the world.

“I’m just happy anybody is watching the show and enjoying it,” said Alec Berg, a co-showrunner, executive producer, writer and director on the series.

The funny thing is that this half-hour comedy has actually made “a dent in the universe”, at least in the data compression universe, which, it turns out, is as fundamental to the future of the Internet as it is relegated to the boondocks within the tech community. Compression is a way of encoding data, be it video, audio, or text, to reduce the size of files and increase both data storage and transfer efficiency.

“Compression is not the sexiest field today,” said Vinith Misra, a recently minted Stanford Ph.D and current research staff member at IBM Watson, who created the show’s fictional algorithm and is credited as a technical consultant.

“The most commonly used compression scheme showed up in the late 70s and we are still using it ubiquitously, it’s everywhere. You haven’t seen breakthroughs happen,” he said.

Misra’s advisor at Stanford, Tsachy Weissman, a professor of electrical engineering, director of the Stanford Compression Forum, and the namesake for the show’s “Weissman Score” metric, explained to Fortune what advances in compression technology could mean for the world.

“How much data we can store and process is going to be proportional to how much we can compress,” he said. “If we could start storing and comparing genomes of all the people in the world, it would boost the rate of discovery by a factor that is more or less equal to the boost in compression rate.”

Universal Internet access and data storage capabilities are also related to compression technology, according to Jim Bankoski, an engineer and director at Google (GOOG), who said it was a “huge task” for YouTube to deliver high quality data to 8 billion people as well as provide users with unlimited, automatic cloud-based storage for photos.

It is not accidental that “Silicon Valley” has hit upon this issue and its potential. According to Jonathan Dotan, who is a co-producer and the technical “point man” on the show, over 180 experts and leaders in the tech community were consulted for the second season of “Silicon Valley.”

If some kind of advancement does happen in the field of compression, it just might be traced back, in some way, to the Stanford Compression Forum, which took place in January on Stanford’s campus and hosted over 40 of the foremost minds working in the field, from academia, industry and government. The Forum is the brainchild of Tsachy Weissman, who worked with Dotan and Misra to bring it to fruition. Weissman and Dotan mentioned seeing the event as a natural extension of their work on the show, owing both to the show’s subject matter as well as the collection of experts who had been brought to together to contribute to it. Plans are in the works for a sequel next year.

Weissman, who founded the Forum, saw the event as a way to bridge all kinds of gaps, including the industry-academic-government and the theorist-practitioner divides. He also said he hoped the group could help “expedite the process” of research and development, through future collaboration and increased government funding.

Already, some tangible benefits have come about as a result of both the half hour comedy and the Forum.

The aforementioned, and once fictional, “Weissman Score” was created to give viewers a sense of “who is winning” in the show when it comes to compression technology, much like a scoreboard in sports. It measures how well an algorithm is able to retain data and how simply it encodes it. The score is now being incorporated into courses offered by at least three U.S. universities and, according to Weissman, has been used in one forthcoming peer reviewed journal article on compression.

“It’s a real metric and reference point now. It’s a well-defined mathematical formula that incorporates compression, in terms of size and then efficiency. It’s very natural,” said Weissman. He noted that Vinith Misra is largely responsible for the metric. He was working on it while he was writing his dissertation.

The Forum also led to the expedited deployment of live-streaming videos using the VP9 compression standards from Google, which offer significant benefits in video quality and size compared to previous versions and is now used on YouTube.

“For us, [VP9-based] live streaming was already in the works, but we created a demo and made it available quicker than we might have otherwise,” said Bankoski. “We were excited to have a chance to have our technology play some part in the show.”

The Forum participants also delivered a white paper to the show’s creators, which was the result of discussion that had taken place.

That Berg and Mike Judge received this white paper is not surprising, given the level of attention the show has paid to technical details. To wit: the term sheet that Erlich Bachman was holding in episode 1 of season two was drafted by a lawyer at Cooley LLP in Palo Alto, a law firm known for its work in tech-based law.

According to Amir Ingber, a senior research scientist at Yahoo, even the formulas on the whiteboards featured on the show are legit. “Usually shows cut away, but on the show they leave it, and I remember really looking at them and they make sense,” he said.

So it goes for most, if not all, of the other referenced technologies, plot points, spoken lines, and set pieces on “Silicon Valley.”

Of course, these “backstories” tend to take the form of white papers, charts, graphs, and mock-ups. Dotan recounted to Fortune how he pitched Pied Piper, the startup featured on the show, to venture capitalists in Silicon Valley to confirm its (theoretical) viability.

“This is what I do, I pitch VCs,” said Dotan, who has both founded and invested in a range of (real) startups. “I’ve sat on both sides of the table and, in this case, I decided to treat it as an actual company and called my peers and asked, ‘Would you invest in this company, Pied Piper?’”

Berg likened the merging of the creative and technical aspects of the show to a tennis match. “We do research on our own, we discuss the main plot points, but one of the delights of the process of this show is basically being able to ask Jonathan [Dotan], who put this army of flying geniuses together, is this plausible?”

Berg, who was an executive producer on TV shows “Seinfeld” and “Curb Your Enthusiasm”, as well as the film “The Dictator”, acknowledged the gift and the curse of approaching the show this way.

“We tried to make it as realistic as possible, so when we get stuck, we can turn to reality. The downside is sometimes we will come up with really funny things and someone would say that would never happen.”

Berg said that they always try to make it as technically accurate as possible and that when, for creative or comedy reasons, they have to depart from reality, the mission becomes to, “get it as close as we can.”

“If we’d been screwing up left and right, hardcore nerds would’ve written us off long ago,” Berg said.

The reaction to the show amongst those in tech, including those who work with compression technology, has been mostly positive.

“When I first saw it, it was unreal to me how accurate it is was. I thought, how will anyone else find this funny? This is my everyday life,” said Sara Haider, an Android engineer at Periscope, who consulted on one episode.

She said the show has entered real-life Silicon Valley culture.

“If someone is going to go meet with a celebrity that just became interested in technology and wants to invest, we’d say, ‘OK way to pull a Silicon Valley.’ Or we call something a “Silicon Valley” moment, it’s a way to make fun of each other.”

Haider said some people in her circles are upset with the show for shining a light on the messier bits of the industry, but she sees it as “healthy” to have a parody of the culture.

“It has gotten around how many people consult on the show, so people are more careful what they say about it,“ she said, much as they would for an app (since the person who made it might be sitting behind you).

Dan Miller, CTO at HiQ Labs and co-founder of On2, which was acquired by Google, noted that while startups, already receive a good deal of attention, the show “maybe puts a real face on it, the challenges they face. These are real characters, it’s very realistic, these are the people you run into up here.“

Vinith Misra recalled the effect of Jurassic Park’s DNA extraction technique on scientists in related research fields. “There were problems with it, but it caused scientists to think about it really hard over the years,” he said.

“Silicon Valley” has been renewed for a third season and the creative team says they are actively looking for new directions for the show, said Berg.

“I learned from Larry David that you should treat every season like it is the last season. Use it all up. Don’t horde it. We burned all of our gunpowder and the cupboard is bare. But we will start from what would really happen.”