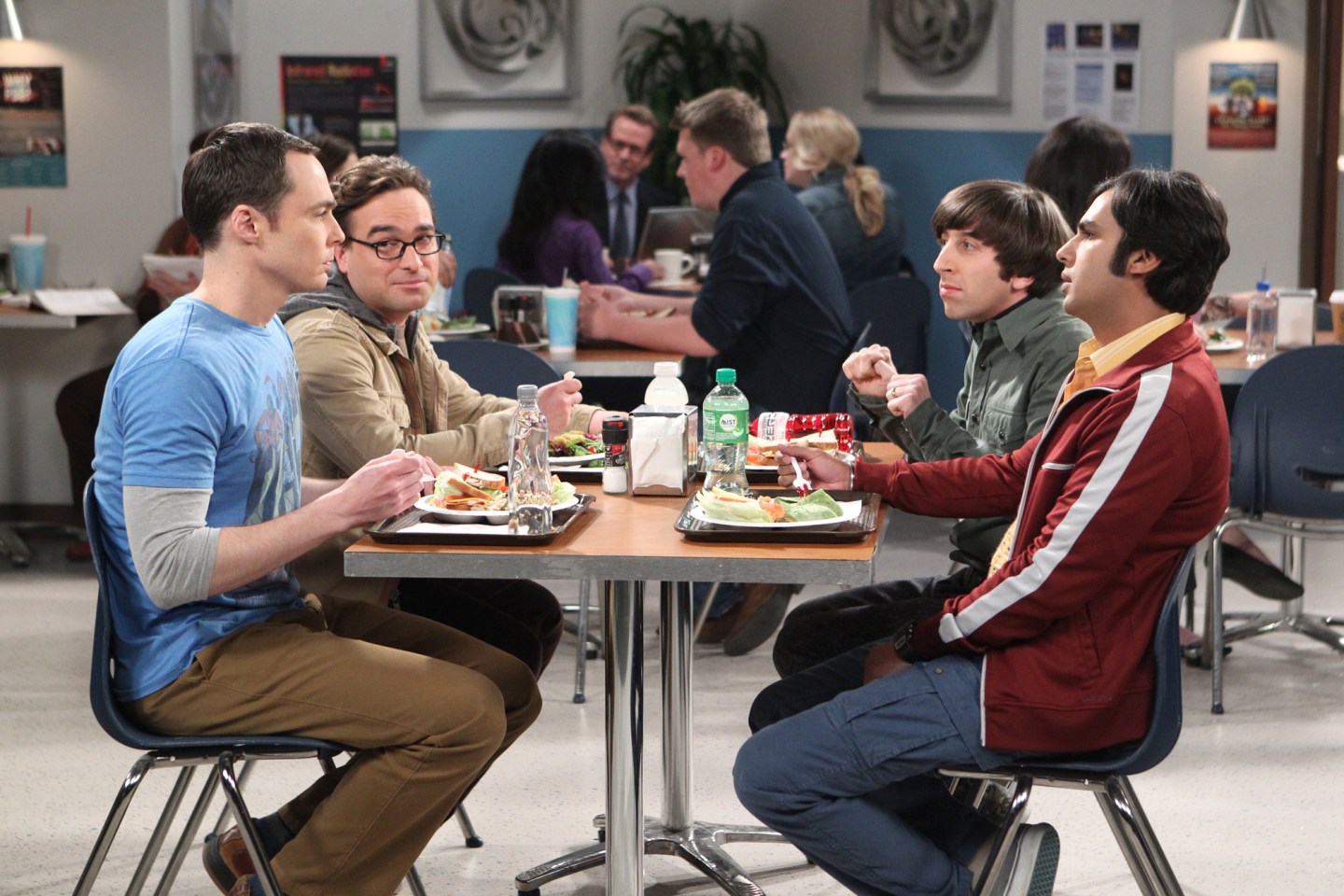 LOS ANGELES - MARCH 10: "The Fortification Implementation" -- When Sheldon and Amy build a blanket fort, they come to major crossroads in their relationship. Also, Wolowitz meets the half-brother he never knew he had, and when Penny is invited to appear on Wil Wheaton's podcast, she and Leonard have a huge, on-air argument, on THE BIG BANG THEORY, Thursday, April 9 (8:00-8:31 PM, ET/PT), on the CBS Television Network. Pictured left to right: Jim Parsons, Johnny Galecki, Simon Helberg and Kunal Nayyar (Photo by Sonja Flemming/CBS via Getty Images)
Photograph by Sonja Flemming — CBS via Getty Images

You may have heard about the new Aaron Sorkin film about Steve Jobs, based on the Walter Isaacson biography, that’s due out October 9. If you’re in Silicon Valley (or an Apple fan boy), you’ve probably already watched the trailer, below.

The comments are already piling up.

Tech culture, particularly with a Silicon Valley spin — whether hacking, Jobs, Bill Gates, Mark Zuckerberg, or San Francisco startups — has been for years a topic of fascination for Hollywood. And the Valley has a love/hate attraction to entertainment that in their eyes can be brilliant … or a pile-up. Many enjoy the focus on the lives and pursuits they eat, breathe, and sleep. But there are some things that get annoying.

One line of criticism is that the result is far from reality. Now, many techies understand that a true representation of what they do isn’t something that would play well. “A lot of Hollywood falls into the trap that the hacker does something magical and breaks into something [immediately],” Rick Howard, chief security officer for Palo Alto Networks, told Fortune. In reality, a break-in “takes planning and weeks or months.” An audience could fall asleep waiting for action.

So, some types of distortion are necessary. Other types drive dramatic conflict but aren’t anything close to what life is actually like, say some. “[There are no] crazy parties with tons of spending of frivolous money by 20-year-old engineers,” Julia Onken, growth and UA lead at event calendaring software company Stanza.co, told Fortune. “There are parties, but it’s mostly bootstrapped engineers passing out together after 4 beers, with like one girl in the room.”

A number of people told Fortune that Hollywood doesn’t get across how hard it is to raise money and put in the long hours necessary to develop a product. “When you actually get into it, no one tells you about the real stresses of the job and how lonely it is,” said Ranvir Gujral, CEO of marketing software company Chute. “Those are the true issues that we grapple with.”

Tyler Reguly, manager of security research for Tripwire, says people in Silicon Valley shouldn’t take it so seriously. “For some reasons, our industry has deemed that all fictional representations must be realistic and accurate, which completely eliminates the purpose of Hollywood,” he said. “The top box office hit this year is [Avengers: Age of Ultron]. A movie with an alien race of Norse gods, a green Hulk that was modified by gamma radiation, a man who built a reactor in his chest, and a super soldier is somehow more acceptable [to the tech community] than a movie that features extremely fake hacking.”

Here are some examples of Hollywood’s product with views, good and bad, from the real techies of Silicon Valley.

The cast of Silicon Valley, HBO's scripted show about a startup's journey.

Description: A comedy TV series in which a group of young men found a startup, develop a revolutionary technology (ignoring theoretical limits on what software can do), and find business gets complicated, even as they remain socially awkward.

"It irritates me sometimes how they exaggerate characters and make it look like the weirdest people in the world are all being handed seven-figure sums off of nothing," Onken said.

Description: A reality TV show, co-produced by Randi Zuckerberg, sister of Facebook's CEO, about a group of young entrepreneurs all trying to become the next big thing in the Valley. It was not renewed after the first season.

Comments: "The tech show from Bravo was just tragic," said Charles Michael Yim, founder and CEO of Breathometer and a former participate on Shark Tank, to Fortune. "It was focusing on parties and drama. It was more about TV than Silicon Valley."

"The Bravo 'reality show' did not reflect reality and you get the sense that the 'entrepreneurs' they cast wanted to be famous and on TV more than they wanted to build companies," said Greg Tseng, co-founder & CEO of social incubator if(we).

Description: Movie about the rise and continued rise of a Harvard drop-out who starts what will become the biggest social network company on the planet.

Comments: "I thought the depiction of the meeting between Mark Zuckerberg and Peter Theil was overly simplistic in the movie The Social Network," said John Kwan. CEO of VeriPic. "While I’ve never met Mr. Thiel personally, our funding did come from somebody close to him and I don’t believe getting an investment is as simple as getting a signed check. That defies reality as we’ve experienced it."

"In The Social Network, faux-Zuckerberg takes hardly any time in writing some code that instantly starts a chain reaction with everyone posting pictures at Harvard," said Jessica Mah, CEO of accounting software and services company InDinero. "The real version would have had Mark sitting at his computer for back to back to back endless days just cranking; but Hollywood makes it look like it was done in the time you'd fill out a shopping list."

Still of Ashton Kutcher and Josh Gad in Jobs (2013)

Comments: "I thought it was OK but I didn't think there was anything remarkable," Yim said.

"Tame is the best word I can think of to describe Jobs," Mah said. "All of the scenes with the team working at the parents' garage had to have been super watered down."

A still from an episode of the most recent season of 'The Big Bang Theory,' which began airing this month in China.

Description: TV series in which quirky -- OK, downright strange -- CalTech physicists, an aerospace engineer, and an astrophysicist stand in contrast to a waitress and aspiring actress who eventually becomes a pharmaceutical sales rep.

Description: A renowned psychologist, whose patient database was hacked, somehow joins the FBI and heads a team of cybercrime investigators, not all of whom know anything about computers. This is another spin-off of the CBS series about crime scene investigation teams.

No one else interviewed by Fortune even mentioned the show, suggesting that the love/hate relationship hasn't even hit the virtual level.