How much is too much? Excerpts of Elon Musk bio raise copyright questions 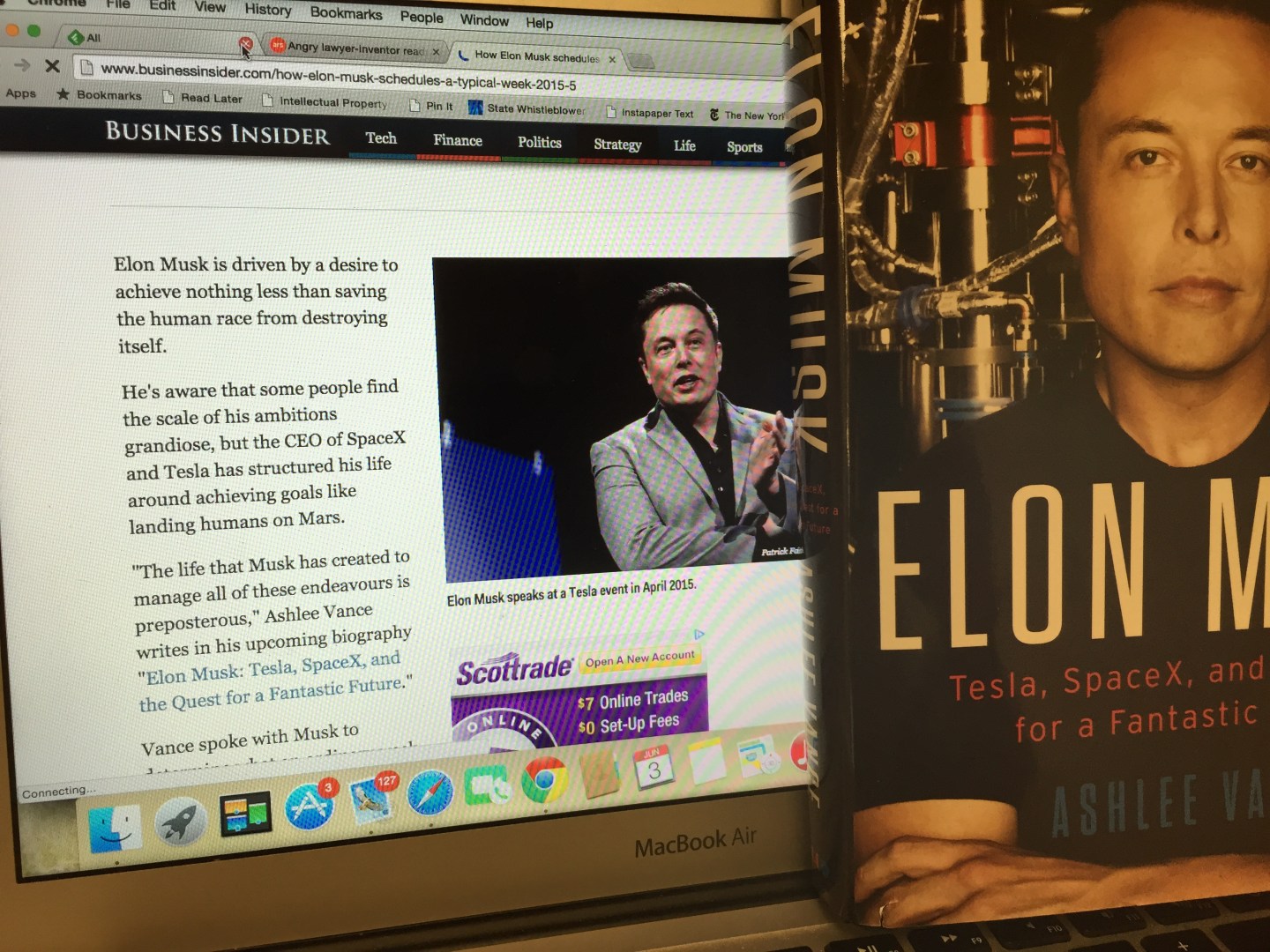 You have to feel for authors. They spend hundreds of hours creating polished, insightful books on a popular topic – only to see websites scoop out the best parts and scatter them as content scraps all over the internet. The writer is left to fret and fume that nobody will buy the book.

This happened last week. Ashlee Vance, the author of a new biography on Elon Musk (of Tesla and SpaceX fame), lashed out at Business Insider after discovering the site was using the book to knock out a series of quick takes: “11 fascinating things Elon Musk said in the book about his life;” “How Elon Musk schedules a typical week;” and at least 10 other such stories.

As the Observer reported, Vance took to Twitter to warn Business Insider founder and CEO Henry Blodget that he didn’t consider “this to be fair use anymore.” Blodget, an affable individual whose site earns respect and ridicule in equal measure, tweeted “Disagree..Creates awareness and sells,” but said he would defer to the author’s wishes.

After some prodding, Blodget finally instructed his writers to stop making lists related to the Musk book, and even pledged to take down the stories and redirect visitors to Vance’s book page on Amazon instead. And indeed, as of this week, this appears to be what’s happened for some of the stories at least.

Blodget appeared to make a decent gesture to address what Vance called “shameful” behavior. A more interesting question might be to ask if his site was engaged in lawful behavior or if, as Vance suggested, Business Insider was violating copyright law.

Book excerpts in the internet age

In a famous copyright decision from 1985, the Supreme Court said a magazine stepped over the line with an article based on forthcoming memoirs from President Ford. The article’s material came via a leaked manuscript, and about 20 percent of its 2,250 words were lifted right from the book. This was not fair use, said the Court, and ordered the magazine to pay damages to Harper & Row, the publisher.

While the case is still good law, it’s unlikely to help Vance or other authors who want to stop Business Insider and other websites from nibbling at their content. One reason is that the Harper & Row case is about unpublished works, and the scope of fair use is greater for works – like the Musk bio – that are already published.

And in the case of the Musk book, there are also questions over whether what Business Insider printed was copyrightable in the first place.

As NYU law professor Charles Colman explained, the list of Musk quotes does not belong to Vance because the author didn’t compose them (Musk did). And as for Business Insider’s summary of Musk’s schedule, those are just facts, regardless of whether the information appeared in Vance’s book first. The upshot is that, even before questions of fair use, Vance might struggle to show any use of work belonging to him.

“With this type of work, it would be an uphill battle for the copyright owner to go after Business Insider because it’s a factual work, and because it’s a small amount [of copyrighted material],” said Colman, pointing out that non-fiction writers have less control than fiction authors.

Overall, though, the lesson isn’t simply that it’s open season on book authors. Instead, the situation simply shows, once again, that information travels much faster in the internet age, but that underlying copyright principles are basically the same. Just as many blogs pick through newspapers and other websites to find tidbits to aggregate, they can and will do the same when it comes to printed books.

The only option for authors like Vance, who want to keep control of their best tidbits, is to make moral appeals to the likes of Blodget not to pull scoops from their books. But are such manners too much to hope for in the age of Internet aggregation? Perhaps, but the age of print publishing wasn’t so polite either: in the Harper & Row case, the magazine published the Ford excerpt specifically to scoop Time magazine, which had already paid for the story. The more things change…