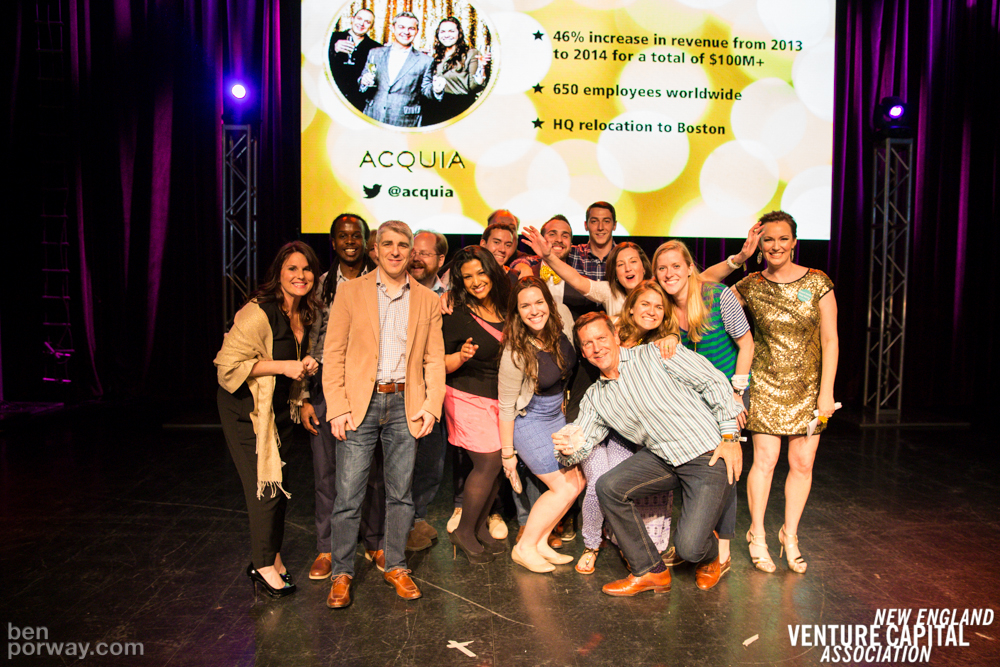 Startups and VCs love to congratulate themselves—a tendency on display at the New England Venture Capital Association “NEVY” awards event Wednesday night. The NEVYs may not be Disrupt yet, but there was glitter galore (and gold-clad go-go dancers) at the House of Blues in Boston. Plus lots of winners.

The goal is to bring together startups and VCs from both tech and healthcare industries and honor the best fledgling companies up to the richest exit, said C.A. Webb, executive director of the NEVCA.

Some winners in the tech category were: PillPack as the hottest startup; Elias Torres founder of Driftt, as rising star entrepreneur; Acquia as next unicorn; Wayfair as best exit; Hubspot CEO Brian Halligan and CTO Dharmesh Shah as entrepreneurs of the year. Founder Collective and FKA Atlas collected fund of the year honors.

In healthcare: Navitor Pharmaceuticals was hottest startup; Nancy Simonian of Syros Pharmaceuticals and Zoe Barry of ZappRX were rising star entrepreneur. The full list of winners and nominees is here. Bruce Booth of Atlas Venture was named rising star VC.

The event kicked off with a serious tribute to local entrepreneur Matthew Lauzon, who recently went public to talk about the trauma of his alleged childhood sexual abuse by Biddeford, Maine police, as Fortune‘s Dan Primack reported. They launched a new site Standupforme to help the victims of abuse in Maine.

One of the goals of this event, now in its third year, is to show entrepreneurs that New England is a good home for their endeavors.The locals are sick of seeing promising companies decamp for Silicon Valley or San Francisco. This event had plenty of glitz which might further that goal.

Sravish Sridhar, founder and CEO of Boston-based Kinvey, said these events are good for morale. “NEVY is a good start. They’re doing a good job engaging the local startup community but it will take time.”

One jarring note, in an era where the scarcity of women execs in VC firms and tech startups has become an embarrassment, why trot out go-go dancers? Webb said she signed off on that decision personally and noted there was also a male dancer. “The theme was Solid Gold and for that you have to have the Solid Gold dancers … There were three females to one male dancer—Sort of the inverse ratio to what you see in our companies.”

That’s probably a rosy eyed view of the industry stats. John Landry, a local angel investor and entrepreneur tallied the total and said there are about 4 female VC execs (general partner, managing partner, director or investment partner) out of a total of 134 in Boston.