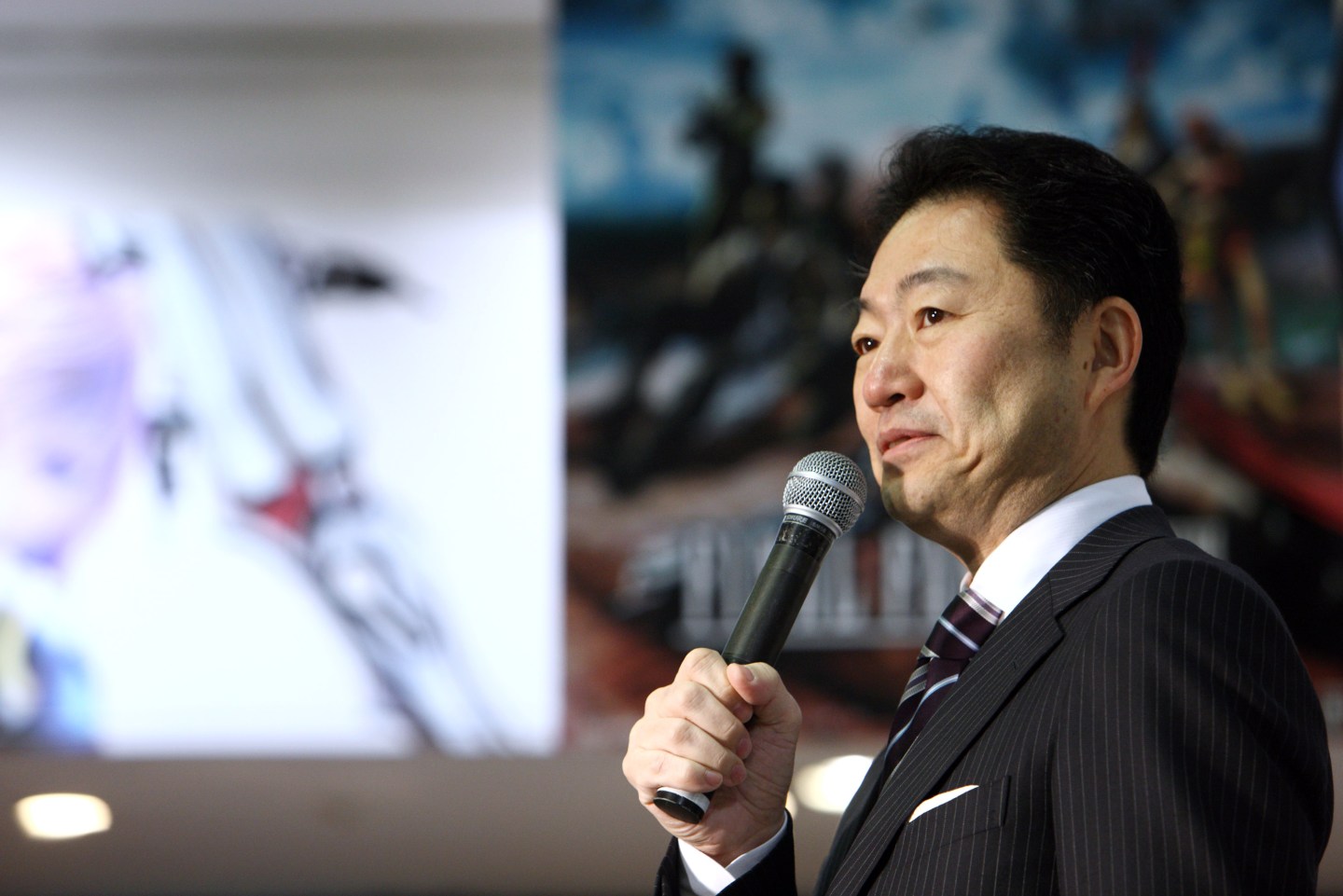 Imagine playing a video game that is so realistic that the world within it continued to change regardless of whether you were playing it. Imagine a game that responds to the way you play it, devising intelligent strategies based on your tactics. The strategies of the game—perhaps its very structures and geography—would be different from one visit to the next. It could be an additional incentive to the gamer: Keep logging in, it seems to suggest, and find out how the game has changed since you last played it.

Soon, these “persistent world” games will be reality, thanks to an innovative new system developed by Japan’s famous Square Enix, publisher of the legendary video game series Final Fantasy. The company has created a new division it calls Shinra Technologies to bring this new vision for immersive, realistic gaming to life. It opened an office in Manhattan late last year.

“You look forward to the changes. You wonder about what’s happening in the world when you’re not playing,” says Yoichi Wada, president of Shinra and former chief of Square Enix. It’s quite a different experience than the video games played today, which primarily focus on what the player is doing. In this scenario, it’s also about what the game is doing.

The initial appeal of such a game might be lost on the average person—but the business benefit shouldn’t be. World-building game Minecraft sold for $2.5 billion in an all-cash deal to Microsoft (MSFT) last year after it became incredibly popular with players who enjoy interacting with the very structure of a game world. Live video game broadcast site Twitch.tv sold to Amazon (AMZN) last year for $970 million, proving that watching gameplay, not just participating in it, is a large part of the fun.

Square Enix is betting that people will enjoy in a whole new way the high-level of graphics of, say, a first person shooter if creativity (à la Minecraft) and interactivity (à la Twitch) are baked right in. Shinra is making a whole new platform that will be capable of running computations in artificial intelligence, graphics, and physics on distinct computers in the so-called cloud. All the local client—industry lingo for you and your personal computer—needs is the ability to receive a video stream and to send back the player’s commands for her character. Everything else will happen on Shinra’s servers.

“This is a rare opportunity to invent a completely new genre,” Wada told a crowd of game makers at the NYU Game Center in Brooklyn in October.

Game developers can start to incorporate these attributes soon. The company plans to release its Community Cloud Development Kit on May 15.

Shinra has been running a three-month beta test of its technology using existing games and in collaboration with NTT East in Japan. It will next conduct a differently configured beta test in the U.S., which it plans to open to users this summer in Kansas City. The goal? See how the new game system works under peak demand, Jacob Navok, a senior vice president at Shinra, says.

According to Navok, three technology advancements have made building the Shinra system possible. First, graphics processor manufacturers have developed systems that work well on gaming servers at a large scale. Second “is the interconnect that occurs between the render servers and the compute servers,” Navok explains. In other words, the server responsible for artificial intelligence can now talk with the server responsible for graphics in a way that won’t make the game stutter or lag for players, allowing for seamless gameplay.

Third, broadband connections to the public Internet are much better than they once were, though there’s still a long way to go. The FCC just changed its definition of broadband in part because the U.S. still has so far to go in developing its high-speed networks. Shinra is beta testing in Kansas City because it’s on the Google Fiber network, one of the only cities in the country with fiber-optic Internet.

While Navok points out that Shinra needs only bandwidth rated at 10 Mbps—as in megabytes per second, a measurement of file transfer speeds—to meet the demands of the game’s resolution, it must be persistent. To function effectively, Shinra’s system can’t buffer its video stream because its viewers are also its actors. Gameplay requires reliable Internet connectivity. “If your neighbor starts to download something and all of the sudden there’s a drop,” Navok says, “that lack of stability gets noticed in the frames of the game.” This is not typically a problem for fiber optic connections, but most of the U.S. still uses cable Internet, where it’s more apparent.

Still, Shinra’s system has an advantage over similar concepts. Chris Roberts built some of the great 1990s games, starting with Wing Commander. He is now CEO of Cloud Imperium Games, the company behind the forthcoming Star Citizen, which, at approximately $72 million so far, is the most successful crowdfunded project to date and arguably the most ambitious videogame ever made. Star Citizen, Roberts says, will still rely on its players’ computers for much of the game’s graphics processing. For this reason, the client that players must download is quite “heavy”: 100 gigabytes, according to video gaming website Polygon.

That’s not so bad for the American market, where hard-core gamers invest in high-octane, high-priced “gaming systems” built for the fastest processing speeds. Asia, Roberts points out, is different. There, many players use Internet cafés where computers don’t have robust enough power to run download-heavy games. “I definitely think that there are new opportunities afforded by processing in the cloud,” Roberts says.

This dynamic is likely a major factor behind Shinra’s plans to run the majority of its processing on its own servers. Navok suggests that Shinra may go beyond addressing players who use Internet cafés to advance ways that mobile users can interact with its games. He’s optimistic about the potential for 5G—the term for the next, faster mobile telecommunications standard—wireless networks to make it feasible for those users to join in, though there’s a long way to go.

Shinra isn’t the first company to dream up cloud-based gaming platforms, and some industry veterans question how novel or innovative the concept really is. Tarn Adams, the creator of Bay 12’s cult favorite, ultra low-res Dwarf Fortress, is skeptical. “I’m not sure why cloud computing is any different in terms of lighting a fire under people,” he says. He argues that the difference in the computing power might be something like the difference between games made in the 1990s and those made today. Games from those eras undoubtedly look different, but their gameplay isn’t necessarily better, Adams posits.

Shinra’s business plan may be what really sets it apart, Roberts says. Shinra could achieve for a variety of games what Roberts’ company has built one game to accomplish. Today’s leaders in cloud gaming are Sony’s PlayStation Now and OnLive Games. Through a spokesperson, OnLive Games says it sees Shinra as a complementary service. A Sony representative says its system is intended to find more ways to deliver existing PlayStation content.

That approach is not of interest to Wada, who says that Shinra will rise or fall on its ability to deliver very new games. His company has commissioned a vast, cooperative massively multiplayer (known as “MMO”) game from Kengo Nakajima, a highly regarded indie game developer in Japan. It’s a bold choice in an industry overrun with violent shooting games. Nakajima’s game, called Space Sweeper, is visually simple but takes advantage of Shinra’s capacity for scope.

Shinra plans to release the engine that powers the game as a software developer kit, or SDK, so that other game makers explore new possibilities for the system. The company’s focus is on encouraging developers to make games on the Shinra platform, Wada says, and proving that it can stand on its own two feet within its parent company, Square Enix.

“We’re beginning our life as a 100% Square Enix subsidiary,” Wada says. “That will not continue. We intend to become steadily more independent. We will speak to investors and raise funding to allow Shinra to grow to where we believe it is capable of growing.”

Correction, May 11, 2015: An earlier version of this article misspelled the name of Shinra’s senior vice president. He is Jacob Navok, not Novak.