CEO exit schedules: A season to stay, a season to go 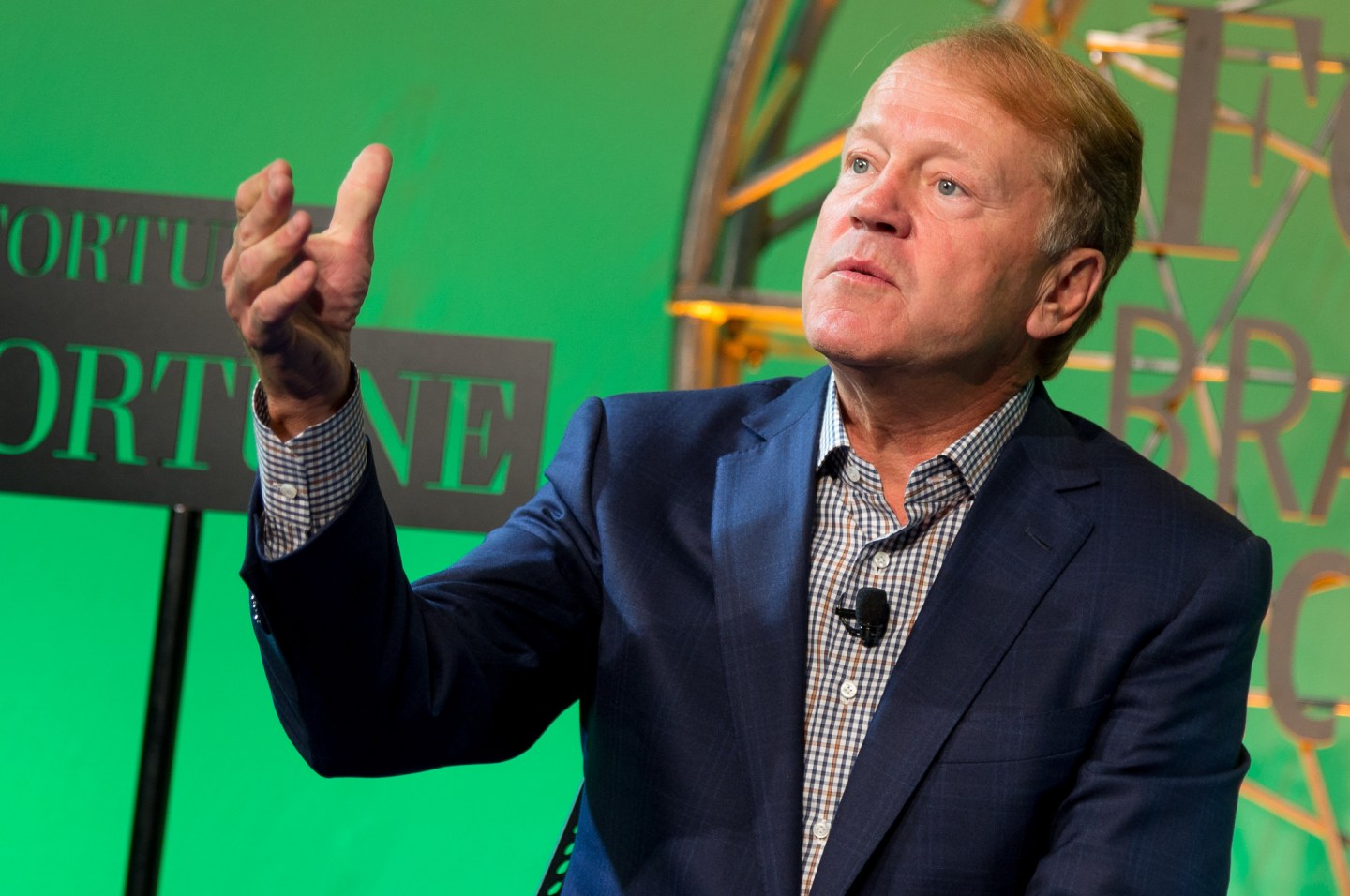 Cisco CEO John Chambers announced on Monday that he would step down in July after a full 20 years at the helm. While in office, he took revenues at the company from $1.2 billion to over $47 billion with a total shareholder return of 1632%, or 15% on an annualized basis. Nonetheless, his exit has triggered widespread discussion over the appropriate length of a CEO’s term.

Bible readers will recall Ecclesiastes, which states, “To every thing there is a season, and a time to every purpose under the heaven.” Does this apply to CEO tenure? Is there an ideal time limit for a CEO’s reign? Should there be a schedule for CEO terms? Fortune’s own CEO data indicates that the 500 largest companies in the U.S. have a median CEO tenure of 4.9 years, but there is quite a range as many of those chief executives are new to office and some are in no hurry to depart.

When it comes to the CEO of the United States, so to speak, we decided that eight years was just fine. Franklin Delano Roosevelt’s four terms of office led some to worry about the risks of an imperial CEO. So, in 1947, Congress passed the 22nd Amendment to the U.S. Constitution, which was ratified by all 50 states in 1951, limiting U.S. Presidents to two four- year terms.

Exactly 20 years ago, just as Cisco’s John Chambers took the reins as CEO, the U.S. Supreme Court rejected term limits for Congressional leaders, wiping off the books laws in 23 states limiting the terms of office for U.S. legislators. The short-lived Articles of Confederation required a “rotation” out of office as a mechanism for ensuring the revolutionary character of the government that the framers conceived. In a 5 to 4 vote, the Court—whose justices have lifetime appointments—deflated the nationwide movements for term limits. Oliver Wendell Holmes served on the U.S. Supreme Court until he was 90 and Justice William O. Douglas served 36 years.

Such long reigns are not out of the question in the corporate world either. In addition to Chambers, 20 CEOs included in Fortune’s analysis have served for 20 years or longer, and an additional 26 have been in office for at least 15 years. Some even surpass the reigns of U.S. Supreme Court justices. Rupert Murdoch, 84, has served as CEO of News Corp for 63 years. Berkshire Hathaway’s Warren Buffett, who is also 84, has been in office for 59 years. Seventy-one-year-old Fred Smith of FedEx has been CEO for 42 years. And at 91, Sumner Redstone has led National Amusements since 1967, with control over CBS and Viacom.

Buffett’s performance has not tapered off over the decades, despite Berkshire Hathaway’s size, with its legendary 1,063,315% shareholder returns over the years (or 22% annualized). However, he has worked to ensure that succession options are at the ready when he steps down.

At a 2007 CEO gathering hosted by Bill Gates, at which I served as a moderator, Warren Buffett asked Rupert Murdoch about his intended succession plans. Murdoch responded with annoyance and said that his then 98-year-old mother was quite active and intellectually sharp and he was in no hurry to go anywhere. Buffett quipped forebodingly, “Well that really is managing outside-the-box!”

In my 30 years studying CEOs retirements, I have found that chief executives fall into four primary categories when it comes to the way they think about their term lengths.

They are often brilliant visionaries who believe that they are the one person on earth who is truly indispensable to their companies. William Black ran the Chock full o’Nuts café chain for 60 years, with his last two from his hospital bed at age 83. Monarch CEOs are driven by an elusive quest for an immortal, lasting legacy, as well as for the heroic stature that comes with the position. They want the world to be different because they lived, but they can be blinded by their visions.

Threatening successors are often eliminated before the board realizes what happened, increasing the board’s dependence upon such monarch CEOs; that was the case with Richard Fuld at Lehman Brothers. They often suffer a stormy, feet-first exit—either dying in office or as the victim of a palace revolt. BCG’s partners revolted while its founder Bruce Henderson was on a client assignment, not even leaving him a desk in the office. Happily, the Walt Disney board moved quickly enough before their once visionary savior, Michael Eisner, could derail the rising star Robert Iger, who was a genuine threat to Eisner extending his 20-year reign. Iger has taken Disney to historic heights, key strategic portfolio enhancements, geographic expansions into China, and 312% shareholder returns over 10 years (or 12 % annualized).

Like the great generals of World War II (Patton, MacArthur, Montgomery, De Gaulle), these CEOs return to office at a time of crisis to revive their enterprise and lead their companies to greater glory than they did during their first tour of duty. Often, they have the credibility to make major changes at their companies. They have the leeway, as Michael Dell has emphasized “To show that this is a business, not a religion.” The challenge for some generals is to not exaggerate the sense of crisis as a pretext to engineer their return to power, as was the case with Harry Gray of ITT,William Paley at CBS, and Juan Trippe at PanAm. Company boards must ensure that the crisis is genuine.

These CEOs often have an excellent relationship with an internally groomed protégé. They can serve as wise elder statespersons and mentors, with roles like cross-industry spokesperson, government emissary, and global diplomat. Time Warner’s Jeff Bewkes assumed power through a graceful transition from his predecessor, Richard Parsons, and in six years as CEO he has produced 388% total shareholder returns (28% annualized).

The challenge for these leaders is to not be tempted by the pull of past associates or their own unfinished career agenda to intervene and undermine their successors as they learn to walk on their own. Since taking over the reins in an ambassadorial succession at DuPont, Ellen Kullman has produced 263% shareholder returns (23% annualized).

Prime examples: Meg Whitman, CEO of eBay and then HP; Jim McNerney of 3M then Boeing; Anne Mulcahy of Xerox then chairman of Save the Children; Jim Clarke of Silicon Graphics, Netscape; Healtheon, and My CFO
[fortune-brightcove videoid=3825380163001]

These leaders generally have short, but highly effective, terms of office.

Governor CEOs often look for new opportunities in public service, start-ups, or turnarounds. After a four-year stint as CEO at 3M, Jim McNerney assumed the leadership of a highly scandalized Boeing and in a decade, has regained its global luster as well as delivering 228% shareholder returns (annualized at 12%).

The challenge for boards with these leaders is to ensure that they don’t get diverted by new opportunities too soon or engage in fire-sale asset auctions to build short-term credibility.

There is no simple answer to the question of CEO tenure. A firm can perform well with leaders enjoying a wide spectrum of terms of office. The strategic context of the business; the culture of the enterprise; and the character of a CEO’s leadership must be assessed by objective board members to determine which departure style and time frame are appropriate. If there was an automatic formula that we could apply, we would not need boards with independent judgment. Now, as for the issue of board term limits….

Jeffrey Sonnenfeld is Senior Associate Dean and Lester Crown Professor at the Yale School of Management. He is the co-author of The Hero’s Farewell: What Happens When CEOs Retire (Oxford University Press).