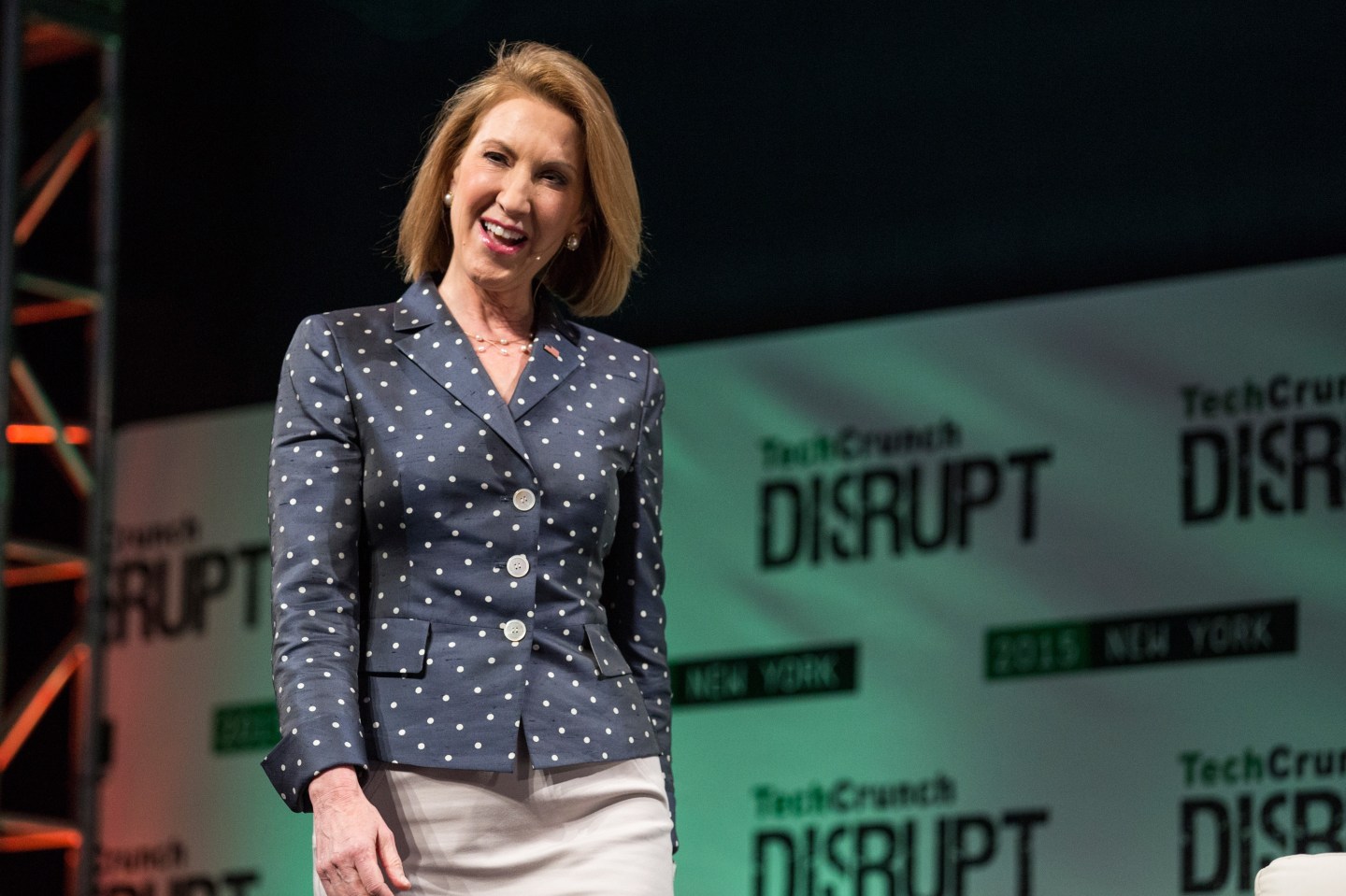 It would be impossible, at the TechCrunch Disrupt conference, to forget that you are at TechCrunch Disrupt. Beyond the startup conference’s ubiquitous neon green signage, a deep male voice casually chants “Tech-Crunch… Disrupt” alongside the techno beats that thump in the background. Your senses insist: Disruption is all around you.

On stage, Carly Fiorina embraced disruption. The former CEO of Hewlett-Packard (HPQ), who recently announced her bid for the Republican presidential nomination, wanted to make one thing clear to the conference’s audience of hackers, entrepreneurs and techies: She plans to disrupt the American government.

Fiorina’s message could paraphrased thusly: The status quo is bad. Big government is bad. Technology can disrupt the status quo and fix the government.

The message manifested itself in rallying cries like, “You don’t manage innovation, you let innovation flourish.”

And, “Technology is a disruptor in how we re-engage citizens on the process of government.”

And also, “Technology is a tool [that can be used to] fundamentally to disrupt the status quo.”

And finally, America is “losing the sense of limitless possibility that has defined our nation,” she declared. (At that statement, a single “woo” erupted from the back of the packed auditorium.)

As if it were a novel idea, Fiorina suggested that politicians should use technology to solicit ideas and feedback from its citizens. “How many people vote for American Idol on their cell phones every week?” she asked. “What if, in addition to that, we had citizens engaging in a conversation, maybe with their president about what they want to see happen?” Later, she admitted she feels the “generation gap” in technology and that she “just doesn’t get” certain apps that are popular with young people.

In addition to Fiorina’s pro-disruption message, she touted her business bonafides, noting that “politics is a fact-free zone” but business, which is based on numbers, is not. She didn’t gloss over her exit from HP, quipping, “You forgot to mention I got fired in a boardroom brawl” to her interviewer. Nor did she gloss over the massive layoffs she enacted in that role.

And yes, she’s aware of Carlyfiorina.org, a website created to shame her for those layoffs. (“You can’t buy every domain name. You just can’t,” she said.)

Fiorina spun the layoffs during her tenure into a positive, noting that she led HP to growth during the post-dotcom bubble recession and that it took some difficult decisions.

“When you disrupt the status quo,” she said, “you make enemies.”