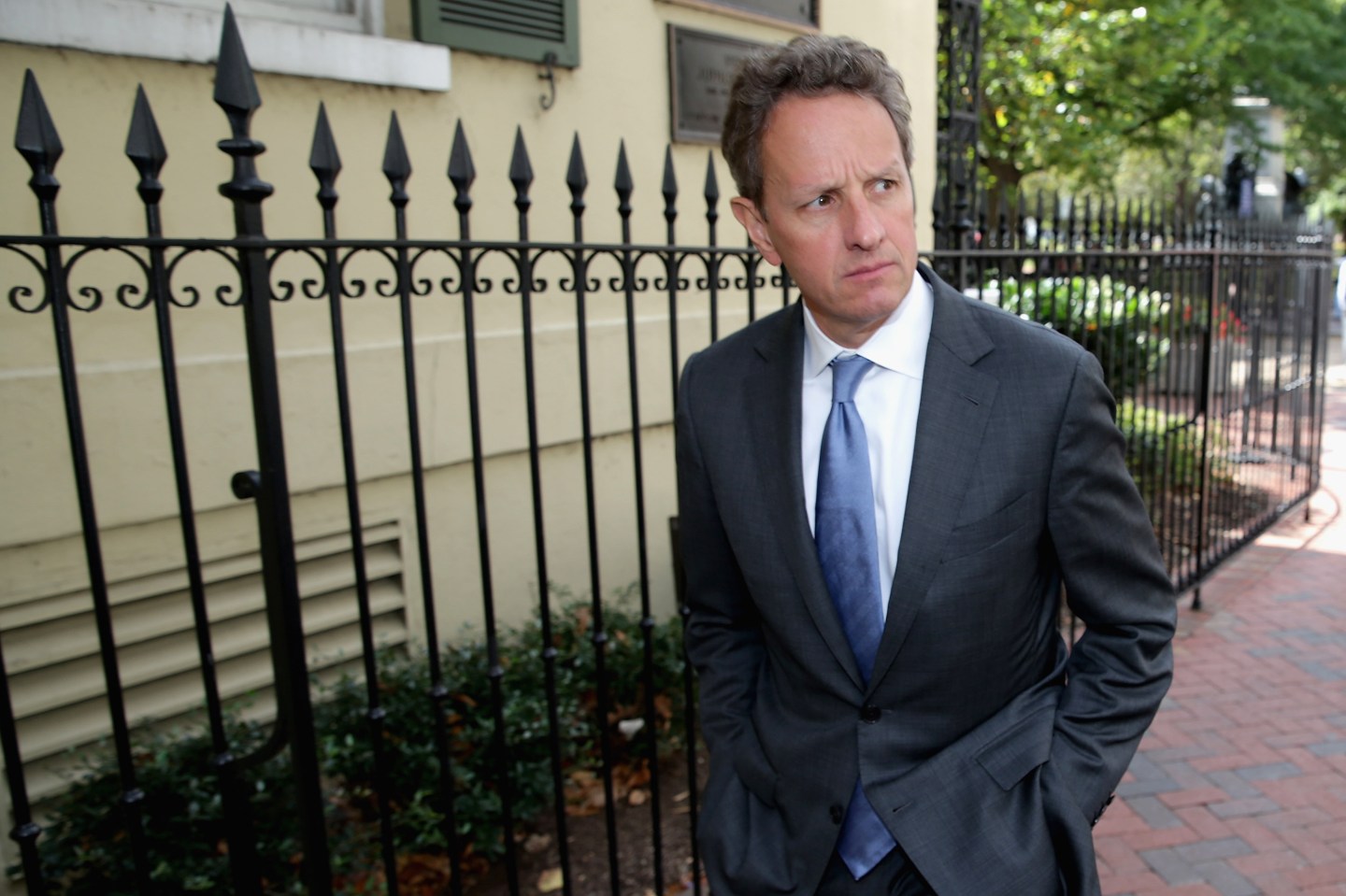 WASHINGTON, DC - OCTOBER 08: Former U.S. Treasury Secretary Timothy Geithner returns from a lunch break to the U.S. Court of Federal Claims during a lunch break October 8, 2014 in Washington, DC. Geithner testified in a class action lawsuit by shareholders of AIG claiming that the U.S. government violated their rights by grabbing a majority stake in the company as part of the 2008 bailout of AIG. (Photo by Chip Somodevilla/Getty Images)
Photograph by Chip Somodevilla — Getty Images

The Milken Institute Global Conference, held this week in Los Angeles, is an event that’s dedicated to problem solving. As its website attests:

The Global Conference convenes some of the world’s most extraordinary people to explore solutions to today’s most pressing challenges in financial markets, industry sectors, health, government and education. Where others see problems, we seek solutions.

Conferences like Milken have an inherent bias towards optimism. Want to know about the world’s innumerable problems? Open a newspaper. People pay good money for a conference like Milken not just to rub elbows with the global economy’s biggest players, but to feel like at least some of these problems are solvable.

But a spend a few minutes at the finance-focused panels at this year’s conference, and the only optimism you’d hear is the very guarded kind. Investors and policy makers are scared: about demographics, central bank policy, growing income inequality, and much else besides.

Former Treasury Secretary Tim Geithner set the tone at a panel on Monday where he shared the stage with Hank Paulson, Bob Rubin, and Facebook’s Sheryl Sandberg. When asked where the economy was headed in the coming years, Geithner reassured the audience, “We live in a scary, dark, messy, and uncertain world. That is the normal state of mankind.“

Jeez, Tim. Tell us how you really feel.

But just so the audience didn’t feel so bad, Geithner and his fellow former Treasury Secretaries let us know that even though the U.S. has a mountain of problems, chief among them a dysfunctional political system, they’d rather have America’s problems than anyone else’s.

Others at the Milken conference aren’t even sure that if we were to optimize policy that the global economy could make it through the next decade without another major crisis. Mohamed El-Erian, Chief Economic Adviser at Allianz, helped popularize the idea of “the new normal,” which correctly argued that the rich world was entering into a period of sustained, sluggish growth back in 2009. Now he’s worried that the financial system isn’t set up to process the inevitable transition it will have to make from massive central bank stimulus to something resembling normal policy.

El-Erian argued that the so-called taper tantrum of 2013, or the surge in volatility in global markets following the suggestion that the Federal Reserve would ease up on stimulus, could be just a taste of what is to come after central banks, globally, attempt to ease up on stimulus. It may appear as if markets are adjusting better this time to the easing of stimulus, but, “While the Fed is easing its foot off the accelerator a little, the [the ECB, Bank of Japan and Bank of China] are pressing their foot even harder. So collectively, we’re still in the central bank trade.” And that means, unless we see an upside surprise in terms of growth, “then we’re going to have a major adjustment” in the next couple of years, El-Erian says.

Meanwhile, at a Monday panel, billionaire real estate investor Sam Zell encapsulated many attendees’ fears about the coming demographic revolution, when many rich countries will see the rapid slowing of population growth or outright decline. “This is the worst demographic situation we’ve had in 500 years,” said Zell.

Income inequality was another major topic of discussion at the conference. Much had changed since the subject was addressed at the conference last year. Gone were the protestations from right-leaning panelists that growing income inequality was actually a good thing. Instead, there was simply bickering over whether raising the minimum wage was a good way to address the problem. Nearly every speaker who addressed the issue nodded to the idea that more infrastructure spending paired with entitlement reform would help solve the problem, but few saw any reason to hope that Washington could reach any kind of consensus on the matter.

Finally, there’s China. Slowing growth in what may be now the world’s largest economy has placed at the forefront the need for China to rebalance and open its economy. At the same time, the Chinese Communist Party is trying to crack down on corruption and dissent. But China experts like Jiming Ha of Goldman Sachs argue that even the 7% rate at which the government claims China’s economy is growing, which would represent the slowest growth there in decades, could be a statistical mirage. He points to slow growth in government revenue and real estate investment as evidence that growth in China is not what it seems.

The only hope that shined through the dense fog of worry was the potential for technology to revolutionize the economy. Panelists marveled at the computing power available today, the kind that could only be dreamed of 20 years ago. But even as they salivated over the possibilities this technology affords us, there was much concern over the jobs that would inevitably be lost as technological progress continues—which would only compound issues like income and wealth inequality.

The Milken Institute’s goal of finding solutions where others see problems is a noble one, but this year at least, it’s failing to hit its mark.