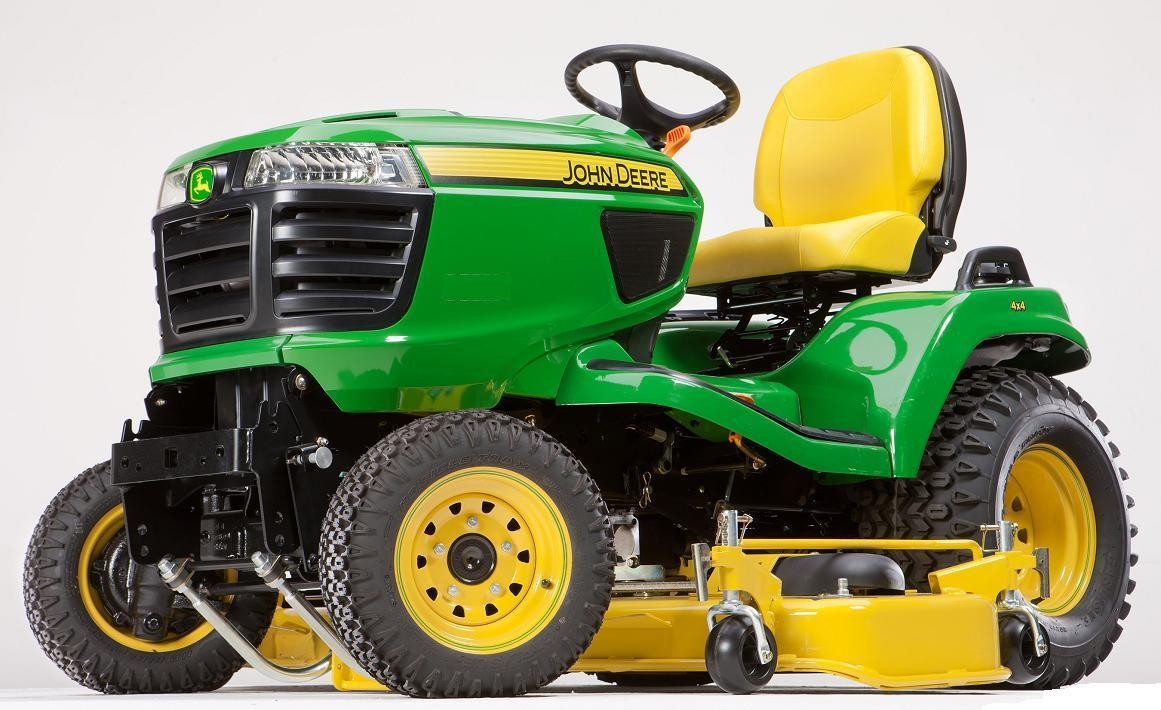 Last June, Paul Sarandos had barely left his house settlement when he called the local John Deere dealership to place an order. The 1.5-acre property he’d just purchased, 20 miles north of Baltimore, had sat vacant for two years, overgrown and unkempt, and he knew it needed some TLC.

In prior weeks, he’d been eying some top-of-the-line tractors. By the time he’d picked up the phone after settlement, he’d decided on the X758, a three-cylinder, four-wheel drive diesel model with power steering and a 12-volt outlet, plus nearly every available attachment. Two days later, the dealer, Finch Services, Inc., delivered his tractor—Sarandos’s first ever—and he has been on his $25,000 toy every weekend since.

As bright green blades of grass heroically push their way through the dirt and usher in a new season, those with lawns dig out garden tools and think about starting the mower. For sure, the indulgent gardener has countless options when it comes to supplementing her luxury tool shed. Williams-Sonoma offers a $1,500 cedar chicken coop and a $300 copper long-handle pitchfork, hand-forged in Austria. The website Amara offers a bubble gum-pink garden hose and matching wall mount for $205, made in Scandinavia.

But the extravagant mower is in a different league. Even without all the tools that more or less turn a John Deere (DE) tractor into a Swiss Army knife, the brand’s residential mowers top out at $12,099. What would drive a homeowner to spend that much on a lawn tool? For that price, I hoped it would simultaneously slow-cook my garden-harvested vegetables.

To find out, I recently headed an hour north of Washington to Finch Services. I asked my dad to join me, since he has a riding mower and a substantial lawn of his own; my grass-cutting experience was limited to operating a push mower as a teenager for piggy bank money.

Finch’s corporate sales manager, Paul Schultheis, greeted us at the front door, reminding us, “It’s Deere season now!” Despite piles of snow overstaying their welcome in corners of the parking lot, spring was in the air. The sales staff snickered when my dad mentioned the brand of mower he owns. At Finch, it’s all Deere, all the time.

As with any luxury product, Deere’s X700 Signature Series—the top of the line for home tractors, introduced in 2013—goes far beyond function. Of course, the brand itself is 178 years old, which adds up to a lot of lawn cred. But as Schultheis and his staff walked me around the parking lot, showing off Deere models with adjustable steering wheels and cruise control, I realized that much of the draw—not unlike that of an extravagant vehicle—is about comfort and bragging rights.

“People buy these tractors because it makes mowing the lawn enjoyable,” Schultheis said. “Buyers aren’t using them to their full potential.” This isn’t surprising; after all, how often do Porsche 911 Turbo owners go zero to 60 in 2.9 seconds? What’s remarkable is that customers spend as much as they do not on a sexy sports car, but on a bright green, grass-cutting machine.

But then I saw what else it could do. Schultheis invited me to drive a D130 (a model available at Home Depot or Lowes for less than $2,000), just to emphasize the difference between lower and higher-end Deeres; as you move up, it becomes quieter. Plus, it’s easier to start the tractor, adjust your seat, steer and mow around trees (or in our case, cones in the parking lot). Customers buy more mower for a number of reasons, ranging from comfort to a beefier transmission to more versatility and productivity (a push mower, for example, has a 21-inch deck, or cutting width; a high-capacity deck can be as wide as 60 inches and can mow through thicker grass faster).

Then I turned the key in the X739, an $11,549 model with four-wheel drive and four-wheel steering, a liquid-cooled V-twin engine, brake and reverse lights and heavy duty tires. No fiddling with a choke–it started as easily as an automatic car. The tractor has a digital dash, a beverage holder and a quieter rumble, despite the higher horsepower. It was a cinch to drive tightly around the orange cones (this model can get close enough so only six inches of grass around a tree is left uncut, a fraction of what other models can achieve). But who am I kidding? It was mostly fun.

When a potential customer comes into a Deere dealership, the sales associate wants to know what he or she is looking to do with the mower. How many acres do you have? What else will you use it for? Those who end up getting a leaf blower attachment for fall, a snow shovel for winter and a tiller for spring will get the most value out of their purchase because they can use it year-round. My dad, eying the X739 longingly, mumbled that he definitely could find uses for it in all seasons.

Schultheis said Finch has seen a huge spike in 700-series sales to residential customers, some of whom only have three-quarters of an acre to mow. Many are in their mid-40s, have recently moved to the ‘burbs and are purchasing their first tractor, not unlike Sarandos. And let’s face it, nothing turns the neighbors green with envy like a Deere.

When Sarandos’s Deere arrived at his house, he faced a lawn that hadn’t been mowed in two years. He dragged downed trees across the property with the tractor hitch and then faced about four feet of grass, extending well over the hood of the mower.

“I got on the tractor and wasn’t sure what it was going to do,” he said. “I thought for sure I’d be out there with a sickle.” But his X758 went right through the grass. “It didn’t even hiccup.”

Sarandos, a service manager at a Ford dealership, also re-graded some of the property with the tiller, hauled branches and three dump truck deliveries of mulch in the trailer, plowed snow with the tractor shovel and aerated the entire property with a drag-behind attachment that helps remove dead grass. Now he’s ready to use his spreader attachment for seed and fertilizer.

Sarandos said he’s having a ball with his Deere and predicts it will pay for itself in the first few years, given what it would have cost him to hire landscapers to do this work. He wanted something he wouldn’t have to replace in a decade—a well-built machine with attachments he could put on himself. One of the coolest features of this line is the Drive Over AutoConnect, which allows the user to quickly remove the mower deck without tools or assistance. Sarandos said he took off his deck and put on the plow, in his dark garage, in 20 minutes.

He concedes that the X758 is overkill for simply cutting the grass, but all winter, he plowed his own driveway and—a blessing to his bad back—didn’t touch a shovel all season.

Sarandos said at the end of the day, the diesel option sold him, which he said translates to better performance and lifespan. But don’t discount the macho factor, either. Sarandos might now very well have the baddest diesel tractor in the neighborhood

And like any respectable neighbor (trying hard not to gloat about his new purchase), he’s been quick to offer the Deere when his neighbor—who has 10 times the acreage—struggled with his own, smaller tractor or a marginally efficient snow blower. “I come from a family of four boys,” Sarandos said. “There’s a little bit of male ego.”