Tesco draws a line under ‘annus horribilis’ with $9.6 billion loss 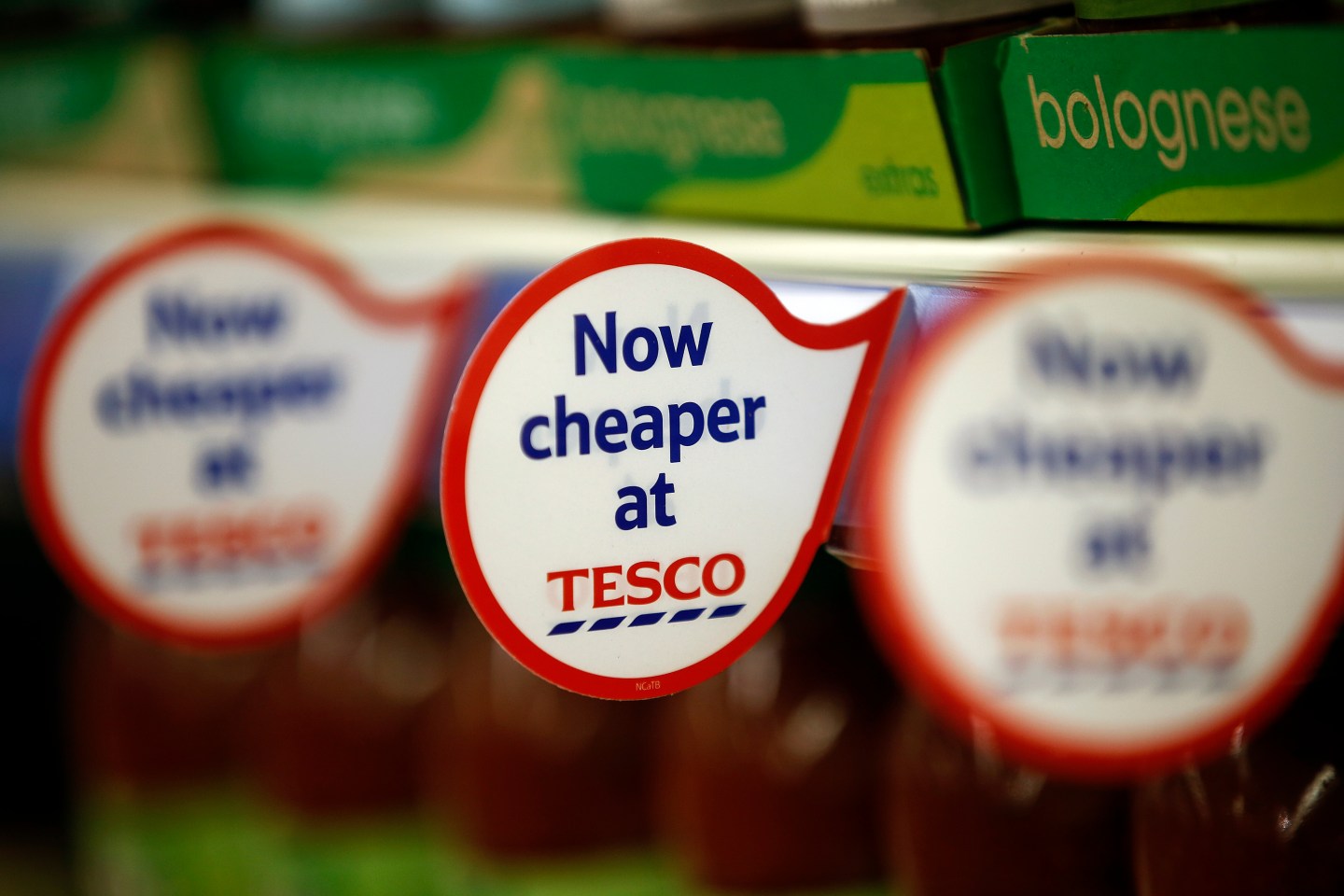 A "Now cheaper at Tesco" label sits beneath a display of bolognese sauces inside a Tesco supermarket store, operated by Tesco Plc, in the Kensington district of London, U.K., on Thursday, Jan. 8, 2015. Tesco said it's cutting the prices of hundreds of branded products -- part of Chief Executive Officer Dave Lewis's plan to turn around a business whose earnings are set to drop to the lowest in at least a decade amid an accounting scandal and a competitive onslaught from German discounters Aldi and Lidl. Photographer: Simon Dawson/Bloomberg via Getty Images
Photograph by Simon Dawson — Bloomberg via Getty Images

Tesco Plc (TSCO) CEO Dave Lewis is breathing a big sigh of relief Wednesday after the stock market took the announcement of a record loss in its stride.

Investors appear to have accepted Lewis’s attempt to present a 6.4 billion pound ($9.6 billion) for the fiscal year ending in March as a sign that the worst is over at Europe’s largest grocer.

In truth, it’s hard to see how it could have got much worse: the company is under criminal investigation for overstating profits, it’s facing a class action lawsuit from investors, it’s scrapped its dividend and has a 3.9 billion pound hole in its company pension plan.

On Wednesday, it added to this list 7 billion pounds of one-off charges, mainly against the real estate value of its stores.

But at the same time, it announced progress on most of its biggest problems: most importantly, like-for-like sales in the key U.K. market improved for the first time in four years in the January-March quarter, and an agreement has been reached on how to close the gap in the pension fund (it’ll cost 270 million pounds a year). In addition, the company is taking back control of 21 of its biggest stores in the U.K. after buying the real estate back from British Land. The pension fund news was also welcome since the hole had been estimated at up to 5 billion pounds by analysts earlier this week.

“Since October, we’ve steadily improved the underlying performance of the business,” Lewis said on the company’s website, pointing to over 4,600 new hires in “customer-facing roles” to improve the much-criticized store experience.

However, no-one was getting carried away. Wednesday’s results don’t magic away the aggressive German discounters Aldi and Lidl, who have grown their combined market share from 5.1% to 9% in the last three years. Tesco’s loss of market share may have slowed, but it’s still continuing (0.7 percentage points in the last fiscal year to 28.4%, according to Kantar Worldpanel).

After being squeezed from both sides by the discounters and premium stores like Waitrose, Tesco has decided to take on the former first, cutting the number of products it sells and driving down prices for staples such as bread, butter and ham.

“The market is still challenging and we are not expecting any let up in the months ahead,” Lewis said in the company’s release, warning that any savings that Tesco can make this year will be reinvested into regaining competitiveness, rather than paid out to shareholders.