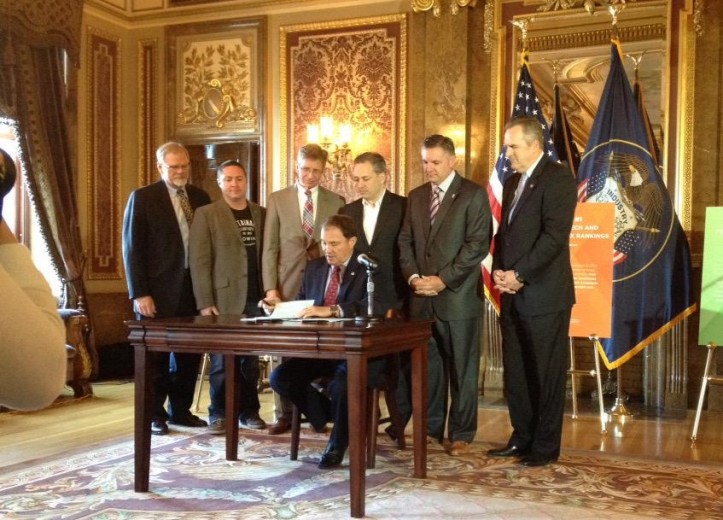 The state of Utah has reversed its ban on Zenefits, a hot San Francisco software startup which the state had previously deemed illegal. Governor Gary Herbert signed a law ending Utah’s ban on Zenefits today.

At issue with the company was its business model. Rather than charge small businesses to use its human resources management software, Zenefits offers it for free. The company makes money by cutting out insurance brokers, who typically take a hefty commission for their role as middlemen between companies and insurers. Instead, Zenefits takes the commissions. (Insurance brokers aren’t thrilled about Zenefits. One told the San Jose Mercury News that “every broker in the country is scared.”)

Charging little or nothing for software is a common practice in the “software as a service,” or SaaS, business. But it is new to the insurance industry. Most states do not allow insurance brokers to offer rebates to customers as incentive to buy insurance plans. Utah’s insurance department argued that Zenefits’ free software counted as a rebate. Last year, the state asked Zenefits for a settlement fine of up to $97,000 with 24 months of probation, unless it began charging money for its software.

Today, with the reversal of the ban, Zenefits touted Utah’s decision to foster innovation in the state. “This law reaffirms Utah’s commitment to supporting innovative companies—even when they disrupt existing industries,” Conrad wrote on his company blog.

In a statement, Gov. Herbert expressed support for disruptive technology companies. “Utah is open for business and we work very hard to make sure we have a level playing field so all businesses have a chance to compete. There are always going to be innovators and disruptors as technology accelerates business growth and we believe government needs to be able to work with these innovators to ensure strong and efficient economic policies and an open marketplace.”

Zenefits is only two years old but has grown incredibly quickly. Last June, the company raised $66 million, valuing it at $500 million. That came six months after a funding round that investors deemed “the hottest deal in Silicon Valley.” With 10,000 clients and more than 930 employees, Zenefits reported a $20 million annual revenue run rate as of January 2015. Conrad has said his biggest challenge, aside from regulatory tussles, is that he cannot grow Zenefits fast enough to keep up with demand.