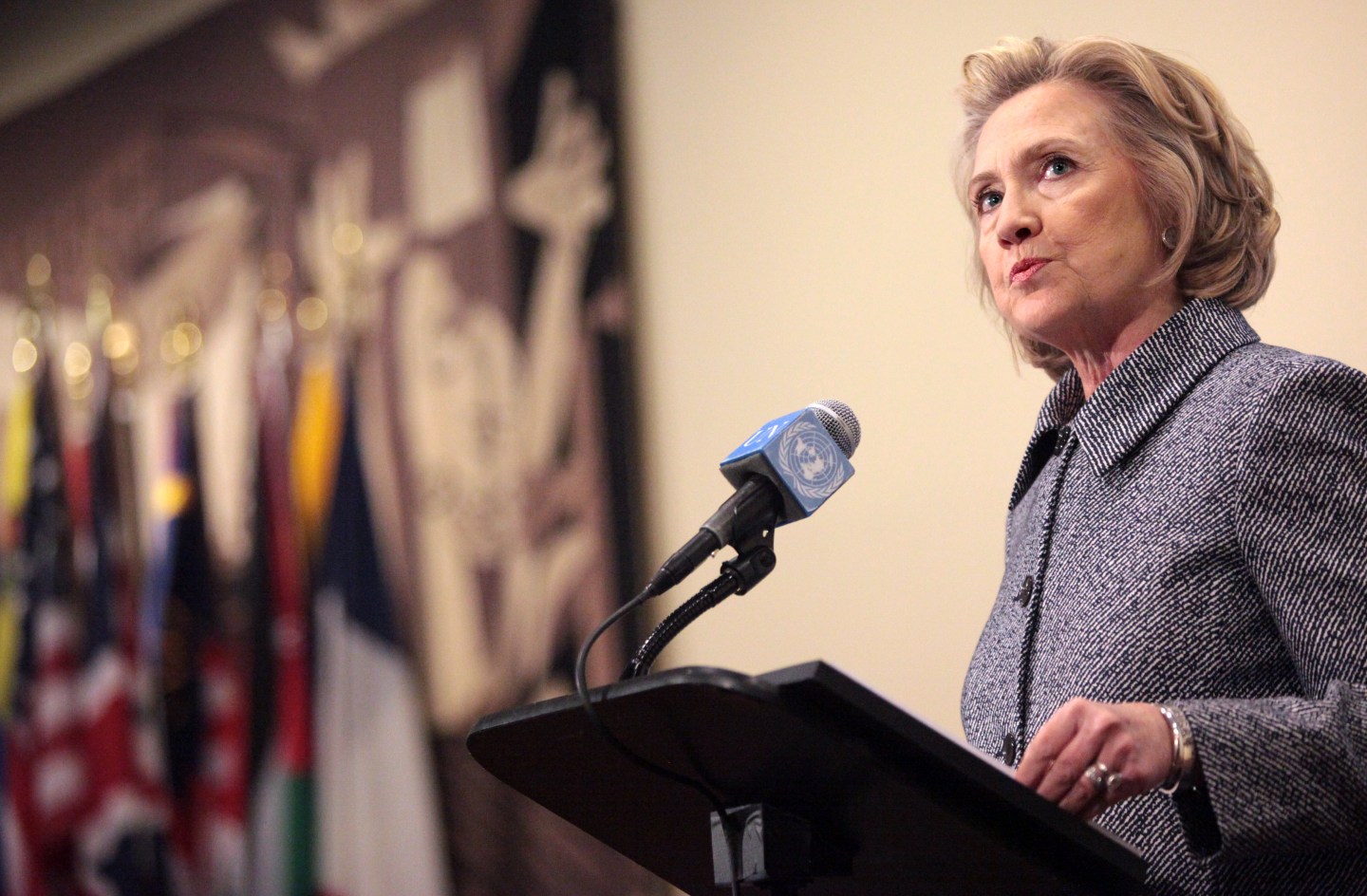 U.S. stock futures are pointing lower Monday, after a three-day winning streak for the major stock averages in months.

Stocks could be swayed by earnings season, which begins in earnest this week. Reports from Dow stocks JPMorgan (JPM), American Express (AXP), Intel (INTC), and Johnson & Johnson (JNJ) are expected in the coming days.

1. The U.S. presidential pool shapes up.

Hillary Clinton launched her 2016 presidential bid Sunday in an online video. It’s her second campaign for the White House. She follows the video, where she said that Americans “need a champion,” with a tour of the early-voting states Iowa and New Hampshire this week. Senator Marco Rubio of Florida is expected to announce his bid for the top position today. Rubio, once a protégé of Jeb Bush, will join fellow Republicans Ted Cruz and Rand Paul as declared candidates.

Check out Fortune’s story on how Hillary Clinton’s leadership has evolved since her last bid for the U.S. presidency eight years ago.

Apple’s new smart watch went on sale this weekend and already ran out of product on Friday when the items were available for pre-sale. Apple (AAPL) is expected to release sales figures for the first weekend this morning. One research group, Slice Intelligence, estimated that the tech giant sold nearly one million pre-ordered watches, spending an average of $503.83 per watch. The group also estimated that a vast majority (62%) preferred the less expensive aluminum model, followed by steel then gold.

China’s March exports shrank almost 15% year over year, a shocking result that has analysts even more worried about the world’s second biggest economy. The decline in exports is the worst in about a year and fell significantly short of economists’ estimates for a 12% rise. The poor results could raise concerns that a strengthening yuan is hindering demand for Chinese goods and services abroad. Exports to the EU fell by 19.1% year over year, and those to Japan by almost 25%.
[fortune-brightcove videoid=4097965426001]

4. Greece continues to fight for cash.

Greek officials kick off another week of talks with EU leaders in Brussels this week. The cash-strapped nation is looking for additional cash — as much as 7.2 billion euro ($7.9 billion) — to meet its debt obligations, and to keep things running at home. It made a 450 million euro ($474 million) loan repayment to the International Monetary Fund last week and another 747 million euro ($787 million) sum is due on May 12, and many onlookers fear Greece will run out of cash in coming weeks to make that upcoming payment. The nation also needs to cough up more than 1.5 billion euro ($1.6 billion) for April social security outlays this week.

The two leaders of the U.S. and Cuba sat down for the first face-to-face meeting of the two countries in nearly a half-century. Obama called it a “historic meeting” and said he believes the two nations could “take steps forward that advance our mutual interests.” Obama is looking to restore diplomatic relations with Cuba and reopen embassies in Havana and Washington. The goal, which was announced in December, has been implemented rapidly. Obama could remove Cuba from the U.S. list of state sponsors of terrorism, although he said he would study the issue further before making the final call.
[fortune-brightcove videoid=4138906920001]