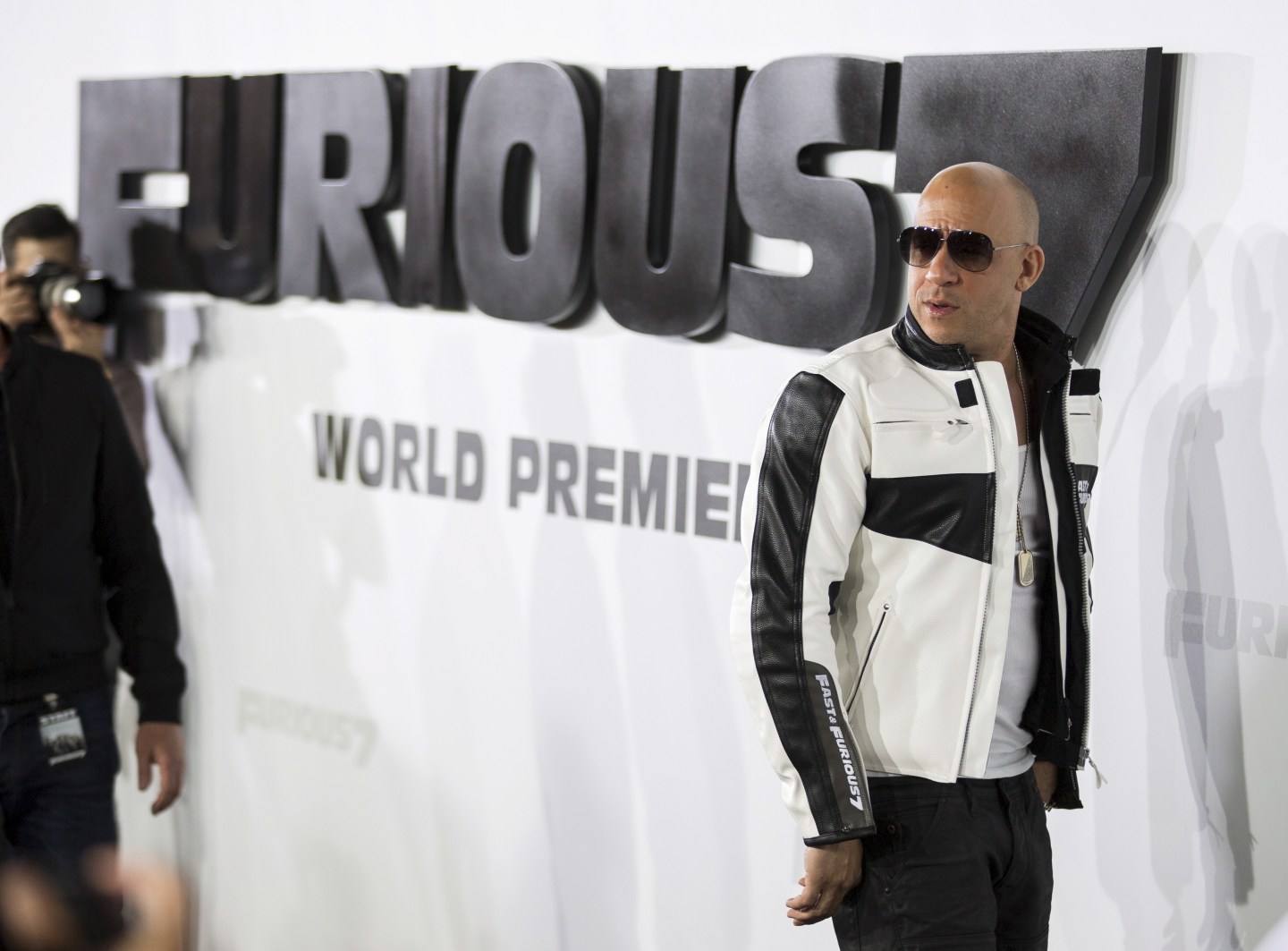 Cast member Vin Diesel poses at the premiere of "Furious 7" at the TCL Chinese theatre in Hollywood, California April 1, 2015. The movie opens in the U.S. on April 3. REUTERS/Mario Anzuoni - RTR4VTJS
Photograph by Mario Anzuoni — Reuters

Chances are most moviegoers who turned out to watch Furious 7 this past weekend weren’t thinking about box-office receipts or monthly sales records. They just wanted to catch the latest installment in a 14-year-old The Fast and the Furious movie franchise, whose massive global appeal has translated into $2.7 billion in worldwide ticket sales for distributor Universal Pictures and its parent company, Comcast (CMCSA).

Furious 7, which debuted in theaters Friday, continued that winning streak in collecting $143 million in U.S. box-office revenue during its opening weekend, easily surpassing the record for an April premiere. The previous record holder, The Walt Disney Company’s (DIS) Captain America: The Winter Soldier, had collected $95 million in sales in its opening weekend last year.

It was also the largest opening in the Furious franchise history, topping the previous installment by almost $50 million. Worldwide, the latest sequel grossed $384 million.

In other words, it wasn’t just a big weekend for the month of April, an atypical launching pad for the biggest blockbuster films. Traditionally, the annual season for so-called “popcorn movies” — big budget, revenue drivers that are often heavy on the explosions and light on the award nominations — falls between May and Labor Day weekend, when studios cater to kids wrapping up the school year and families looking for indoor entertainment options to fill the long, hot days of vacation. The film industry’s 18-week summer season usually accounts for roughly 40% of the industry’s annual box-office sales, according to Paul Dergarabedian, senior media analyst for entertainment researcher Rentrak

But, in recent years, major studios have been more willing to spread the release dates of their biggest films around the calendar in the hope of avoiding a pile-up with other blockbusters. The fact that Furious 7‘s record-setting opening fell on the first weekend in April is just the latest example of the expanding the blockbuster season.

This is not a new phenomenon. In fact, it’s been going on for years. The traditional blockbuster season used to be thought of as beginning with Memorial Day weekend until 2002’s Spider-Man posted an opening well over $100 million in the first week of May, according to Dergarabedian. Since then, studios have staked out dates further and further outside of the traditional sweet spot, including Furious 7 as well as Disney’s Captain America sequel, which opened in April last year. (Warner Bros. (TWX) even staked out next year’s March 25 release date for Batman vs. Superman almost two years in advance.)

In other cases, studios have tested out potential blockbuster films in nooks and crannies of the calendar where they face less competition. The first film in The Hunger Games franchise hit theaters in March 2012 and exploded with an opening weekend domestic gross topping $150 million. The two subsequent installments have also been released in November, outside the typical summer blockbuster season. Despite that, both have ranked among the top-grossing releases of their respective years.

“If you build the perfect box-office beast, you can literally put it out any time of the year and potentially have what were once considered blockbuster numbers [in March and April],” Dergarabedian told Fortune.

What’s more, Furious 7 is already the third film released this year to set a monthly opening weekend record. Following a limited release for Oscar consideration, military biopic American Sniper‘s wide release set a record for January with an opening weekend gross of more than $90 million. The following month, Universal scored another hit with Fifty Shades of Grey — a somewhat surprising hit that opened with a February record of $81 million in its first weekend despite its risqué subject matter and lack of action, at least in a conventional sense.

Later this year, the rebooted Star Wars franchise will look to set a new record for a December opening with Star Wars: The Force Awakens, which has a shot at becoming that month’s first $100 million opening weekend.

Hollywood was expecting a record opening for Furious 7 considering the wide appeal of the previous films in the franchise and death of lead actor Paul Walker in the lead up to its release. It served to increase the film’s buzz. Dergarabedian also thinks the franchise’s consistent success is owed to audiences’ attachment to a popular and diverse ensemble cast that includes actors Vin Diesel, Dwayne “The Rock” Johnson and Michelle Rodriguez, among others.

Universal also clearly expected a strong reception for Furious 7 as the sequel reportedly received the studio’s widest release ever with 4,004 theaters.

Had Furious 7 been released last summer, as was originally planned, the film might not have had such a massive opening. But it likely would have still buoyed what was a disappointing summer season at the box-office for the movie industry. Last year’s summer ticket sales were down 16.4% from 2013 and the industry suffered from a clear lack of blockbuster films during what should be its hottest period of the year.

This year is different, though, and Universal likely planned Furious 7‘s early release, in part, to allow the film to rack up big ticket sales before other high-profile films hit theaters. This year’s slate of summer films is stocked with several expected blockbusters, not the least of which is Disney’s The Avengers: Age of Ultron — the sequel to the 2012 smash hit that was one of the top-grossing films of all time with more than $600 million in domestic sales. Dergarabedian thinks Universal could also be giving Furious 7 some breathing room before the studio releases the rest of its own slate of highly-anticipated films, including Jurassic World, a sequel to comedy smash Ted, and the animated spin-off Minions.

Industry forecasters expect 2015’s summer box-office figures to see a swift rebound from last year’s struggles, but films like Furious 7 continue to prove that big-budget blockbusters can still find a home — and a mountain of ticket sales — in pretty much any corner of the calendar.