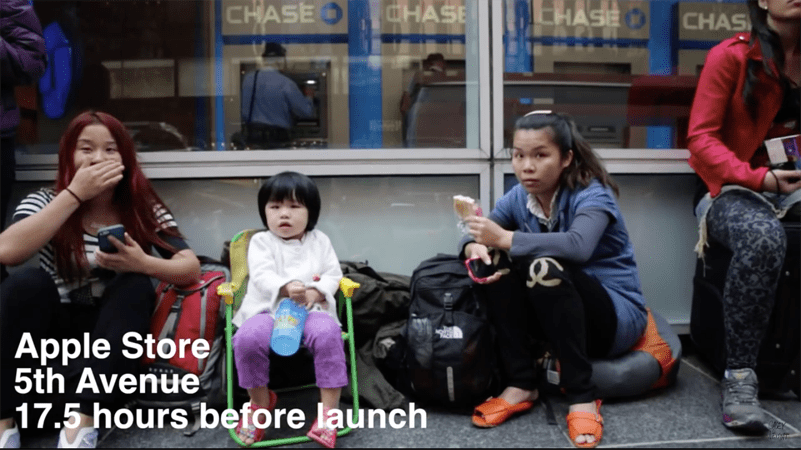 Remember the customers carrying bundles of cash who queued up last September to buy as many iPhones as Apple would sell them?

It could happen again.

“We saw this with the iPhone,” said Asymco’s Horace Dediu in a podcast recorded Thursday. “We’ll see it in spades with the gold Apple Watch.”

Most analysts expect demand will be strongest for Apple’s aluminum and steel watches, which start at $349 and $549, respectively. Dediu believes Wall Street may be underestimating the intangible appeal of a $10,000 gold watch. Especially one given as a gift. Especially in China, with its rich tradition of over-the-top gift giving.

The gold watch has something else going for it. Unlike the value of a Rolex, say, which can range from a few thousand dollars to tens of thousands, the price of the Apple Watch in each of its global markets is fixed; it’s listed on the website.

“It’s like currency,” says Dediu. Factor in local taxes, and you can calculate with some precision what he calls the “global arbitrage opportunities.”

“If someone smuggles one of these into China,” says Dediu, “they’ll pay for their flight ticket and then some.”

He reports that in Boston there were still queues for the iPhone 6 Plus in January, almost five months after it launched. “They’re mostly Chinese,” he says. “They’re doing it as a business.”

It can be a rough business, as a documentary film shot outside Apple Stores in New York City last September demonstrated. It might be even rougher in April, when buyers could be carrying bundles of cash in units of $10,000.

That’s cash that will go almost directly to Apple’s bottom line. Dediu estimates that the margin on a $10,000 gold watch could be as high as 90%.

“I wouldn’t be surprised if in the first few months the demand for gold is far, far higher than we imagined,” he says. “They’ll just be out of stock, permanently.”

ON THE OTHER HAND: 9to5Mac’s Mark Gurman, with good sources in Apple retail, says there will be no lines for the gold Watch.

No Waiting In Line: Unlike stainless steel Apple Watch and Apple Watch Sport customers, those seeking to buy the Apple Watch Edition will not have to wait in a line. Sources say that potential Edition buyers will have priority access to assistance, effectively skipping the line of other waiting customers. Experts will be able to help a couple of customers try-on Watches simultaneously, unlike standard employees who will simultaneously help as many stainless steel and Sport customers as necessary.