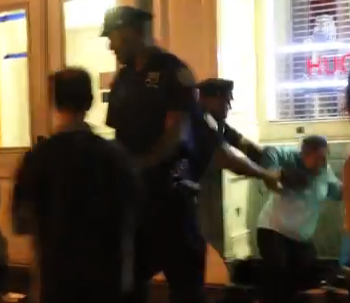 Anybody who has stood in line waiting to buy a new iPhone knows the score: Many, if not most, of your fellow line sitters are paid to be there. They are the foot soldiers in a chain of resales that leads from the Apple Store, through Hong Kong, to mainland China, where the devices command a premium on the grey market. (See The Chinatown connection.)

It’s an old story, one I’ve seen played out at nearly every iPhone launch event. But I’ve never seen anything like what happened in the hours leading up to Friday’s launch of the iPhone 6 and 6 Plus.

Film producer Casey Neistat (HBO’s The Neistat Brothers) captured the scene in the attached YouTube video, documenting the first three steps — the wait, the switch and the cash payout — plus some sidewalk drama courtesy of the New York City Police Department.

“How can this possibly be good marketing for Apple?” asks a man at 6:00 minute mark.

A better question: What can Apple possibly do about it?