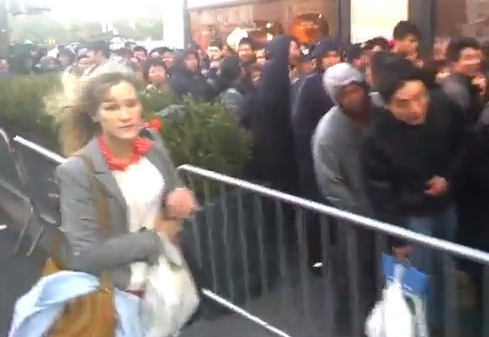 I wasn’t there to see it myself, but by the evidence of Piper Jaffray’s headcount, Business Insider’s walking map and BTIG’s video, the launch of the iPhone 6 and 6+ at Apple’s flagship New York City store was a success of monstrous proportions.

Both Munster and Piecyk noted the high concentration Asian faces in the crowd. That’s due at least in part to Apple’s rollout strategy.

In 2013, mainland China was among the first wave of countries to get the iPhone 5S and 5C. This year, it’s not on the short list, which has helped fuel demand in China’s moneyed class and a large grey market. Piecyk passed on to his clients one report of prices for the iPhone 6+ in Asia reaching $4,770, a premium of nearly $4.000 over the device’s list price (unlocked).