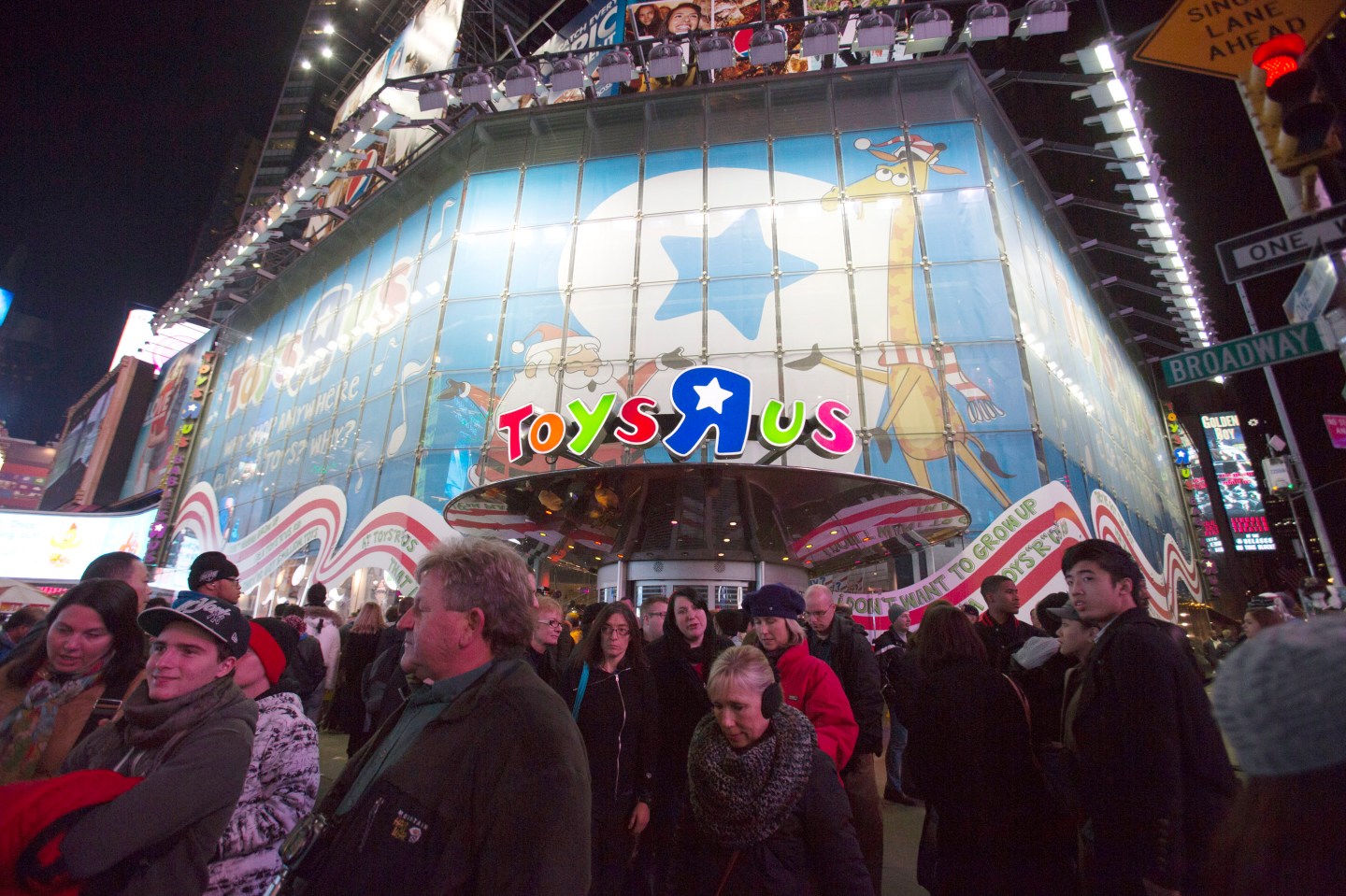 NEW YORK, NY - NOVEMBER 22: People gather outside Toys R Us for the Black Thursday in Times Square November 22, 2012 in New York City. The store got a head start on the traditional Black Friday sales by opening their doors at 8pm on Thanksgiving night. (Photo by Andrew Kelly/Getty Images)
Photograph by Andrew Kelly — Getty Images

Toys “R” Us says it will “gladly” remain a Times Square tenant if negotiations with the toy retailer’s landlord result in a rent that the company deems reasonable.

The toy retailer has called its 110,000-square-foot Midtown Manhattan flagship store, which is located on 44th and Broadway, home since 2001. The future of the store, which has a 60-foot Ferris wheel and a life-size Barbie dollhouse, was called into question last week when a report said the lease for the space hadn’t been renewed.

“There is a limit to what we can pay for it,” said Toys “R” US CEO Antonio Urcelay in a presentation to members of the media on Tuesday. “We would gladly stay here for a rent we believe is reasonable,” he added, noting that the company is negotiatiing with its landlord. Toys “R” Us declined to disclose the flagship store’s sales and wouldn’t comment on its profitability.

Manhattan real estate was a hot topic at the event. The lease for the company’s FAO Schwarz store, which is located on Fifth Avenue just south of Central Park, is up for renewal in 2017. Toys “R” Us is also negotiating with that landlord and is mulling other store locations in the area if it can’t strike the right deal on the rent there.

Hank Mullany, president of Toys “R” Us in the U.S., said the company is “committed to FAO and want to have a presence in this area for that store.” FAO Schwarz, which Toys “R” Us acquired in 2009, has operated a store on Fifth Avenue since 1931, although it moved its flagship location less than one block in 1986 to the current 66,000 square foot store. There have been rumors the company will move that store location to a new mall in New Jersey, although executives won’t comment on that speculation.

The sensitivity to rents in Manhattan comes as Toys “R” Us touts a stronger profitability picture, but is still struggling to compete with retailers such as Amazon.com (AMZN) and Wal-Mart (WMT) for a chunk of the toy business. Comparable same-store sales slipped 1% domestically in fiscal 2014, better than the 5% drop the prior year. But industry-wide, toy sales reportedly climbed 4% to $18.08 billion in 2014, so the sales decline Toys “R” Us reported last year implied it lost market share to competitors. Executives say they were more disciplined on promotions and were able to sell toys at more profitable prices, especially in the second half of the year.

Here are three other key points that Toys “R” Us outlined for 2015:

1. No huge announcement planned on wages.

Wal-Mart, Target (TGT) and other major retailers have generated headlines for signaling a plan to raise their starting salaries to $9, a sign the labor market is tightening and there is more competition for talent. Don’t expect a sweeping announcement from Toys “R” Us, though, as the retailer says its average wage is already above that pay threshold. “We set our wages competitively based on what’s happening in every single market, so we have got different starting rates across the country,” said Mullany.

The challenge for brick-and-mortar retailers is this: how do you compel more in-store traffic and shopping when shoppers are increasing buying goods online via both their home computers and mobile devices. Toys “R” Us said it is developing new store prototypes for both the Babies “R” Us and the Toys “R” Us businesses. Urcelay said the company isn’t trying to open a new chain of stores — the new concepts would need to be implemented within the company’s existing store base.

The Babies “R” Us stores contribute 38% of sales in the U.S. market, although those stores suffered a greater sales decline last year when compared to the namesake retail stores. A plan to fix this business is viewed as one of the most significant turnaround efforts by the retailer’s management team, which said the company “lost some of its specialist focus.” It wants to focus less on churning out transactions and more on building relationships with shoppers. The company plans to offer more parenting classes and also reinvent the retailer’s baby registry, which accounts for half of spending in those stores.