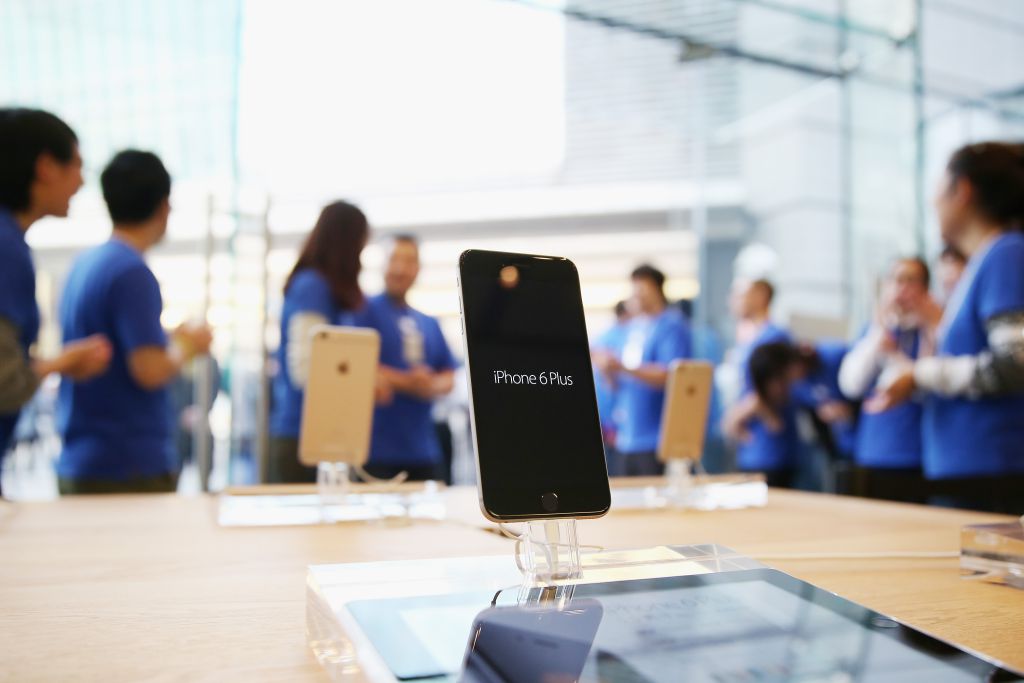 Apple (AAPL) had another stellar holiday quarter, with U.S. sales rising 22% to $26 billion (or nearly what Macy’s (M) makes in an entire year). That performance, fueled by the popularity of the new iPhone 6, gave the electronics company an even bigger lead over other retailers in productivity, with its stores generating a staggering $4,798.82 in sales per square foot on annualized basis at the end of 2014, according to brand new data provided to Fortune by eMarketer.

That compares to $4,551 earlier in 2014 and well ahead of Apple’s closest rival on this front, luxury jeweler Tiffany & Co (TIF), which saw sales of $3,132.20 per square foot. (As a point of comparison, department stores such as J.C. Penney (JCP) and Macy’s generate $160 to $200 per square foot — although to be fair, aisles and aisles of low-priced clothes and towels are less of a draw than than highly coveted electronics.)

The new eMarketer ranking clearly shows how brands such as Lululemon Athletica (LULU) and Kate Spade (KATE) are still ascendant, while Coach (COH), in the middle of a painful re-invention, is in decline.

Below are the top 10 U.S. retailers by sales per square foot, the most closely watched metric in commercial real estate. It excludes non-mall based retailers, such as gas station convenience store operator Murphy (which is in fact no. 2), primarily foreign stores such as Canada’s Birks Group, Movado (whose U.S. stores are discount outlets), and privately held companies.

LAS VEGAS, NV - JANUARY 07: A Sleep Number representative lays on the new Sleep Number X12 bed in the Sleep Number booth at the 2014 International CES at the Las Vegas Convention Center on January 7, 2014 in Las Vegas, Nevada. CES, the world's largest annual consumer technology trade show, runs through January 10 and is expected to feature 3,200 exhibitors showing off their latest products and services to about 150,000 attendees. (Photo by Justin Sullivan/Getty Images)

Bedding retailer Select Comfort (SCSS) operates 460 Sleep Number stores across the United States, and expects total sales to rise by a high-single-digit percentage in 2015 while it increases its store count by 6%.

It might seem surprising to see a big-box chain like Costco Wholesale (COST) make this list, but the second largest U.S. retailer after Walmart only has 468 U.S. locations, compared to more than 3,300 for its bigger rival, meaning it gets a lot more bang for its buck from each store. (Walmart’s U.S. sales are about four times greater in dollar terms.) What's more, its stores are in more affluent parts of the country than those of its main rival, Wal-Mart's Sam's Club chain, allowing Costco to cater to a well-heeled clientele

NEW YORK - MARCH 30: Shoppers walk next to shops of Manhattan's newest mall in the Time Warner building March 30, 2004 in New York. The building has been a hit with the public, attracting hoardes to its shopping, luxury hotel and nightlife. (Photo by Chris Hondros/Getty Images)

The upscale travel products company might be small, but it’s still growing — the company expects total sales to rise as much as 12% this year. But Tumi (TUMI) also plans to keep opening its own stores in addition to the department stores that sell its suitcases and iPad cases.

Signet Jewelers (SIG) is the operator of the Kay and Zales jewelry store chains, fixtures of U.S. malls. During the recession, Signet deftly took advantage of smaller rivals' problems to consolidate the business and get suppliers, impressed by its financial stability, to provide the choicest jewelry. The company is now twice as big as Tiffany, with sales per square foot lower primarily because Signet's stores are mid-tier, rather than luxury. (Its off-mall concept, Jared, is pricier than Kay or Zales, but not quite as expensive as Tiffany.)

Coach continues to feel the pinch from having become too logo-focused and promotional in recent years — two strategies that severely damaged its almost-luxury cachet and led Coach to lose a lot of ground to Michael Kors and Kate Spade. But the 74-year-old New York company is fighting back, closing dozens of underperforming mall-based stores to focus on making locations in key cities more elegant and elevated. And its collections by creative director Stuart Vevers have helped to repair Coach's fashion status.

Kate Spade is another hot brand that has been eating into Coach's (COH) one-time supremacy in the handbag area, with staggering comparable sales growth of 24% in 2014. The company has decided to shutter its Kate Spade Saturday and Jack Spade stores, a move likely to push up its sales per store as weaker locations close. (Jack Spade will be sold via wholesale and online, while Kate Spade Saturday is being folded into its Kate Spade New York brand.) The company continues to expand its store network, which grew to 108 stores (excluding outlet stores) from 88 last year.

A sign is displayed on a Lululemon Athletica store in Pasadena, Calif.

Lululemon hit a bit of slow spell early in 2014 as it faced a board drama with its founder Chip Wilson, and as it dealt from the lingering hangover from a 2013 recall of some of its popular pants due to excessive sheerness. But Wall Street is bullish on Lulu again, with a men's collection that is winning it new customers, and comparable sales expected to have risen 7% in the fourth quarter. So it wouldn't be surprising to see Lululemon's sales per square foot start rising again.

Flameout predictions aside, Michael Kors (KORS) just keeps growing. The fashion company's overall sales in North America (it does not break out U.S. results separately from Canadian numbers) soared during the holiday season quarter, with comparable sales rising 6%. By that measure, its meteoric growth is slowing. Still, the company's North American store count rose to 337 from 284 in 2014, and Kors has become one of the most sought-after retailers by mall developers.

Shoppers at a Tiffany store.

Tiffany (TIF) has struggled with getting U.S. consumers to buy its less expensive, silver jewelry. But the jeweler's high-end merchandise, such as $50,000 diamond necklaces, is enough of a draw to make Tiffany, with its small stores, among the most productive retailers.

The retailer's Tiffany T line, the first collection by star design director Francesca Amfitheatrof, is off to good start and re-establishing Tiffany's reputation for stylish jewelry, something that should help its sales-per-square foot keep rising.

Apple Inc. signage is displayed at the Yerba Buena Center before the start of the the company's Spring Forward event in San Francisco, California, U.S. on Monday, March 9, 2015. Apple's chief executive officer Tim Cook returns to the spotlight to answer questions on many of the Apple Watch's key selling points, including price range, battery life and when in April it will reach stores. Photographer: David Paul Morris/Bloomberg via Getty Images

The tech giant's lead over other retailers just seems to get bigger every year. And the company is not content to sit on its laurels: former Burberry CEO Angela Ahrendts is now in the process of re-inventing the Apple store experience. But even in their current state, Apple's 350 U.S. stores are doing fine.

In fact, Green Street Advisors, a real estate advisory firm told Fortune that U.S. malls with an Apple store generate 10% more in sales-per-square foot than those without one. That in turn gives Apple clout with landlords such as Simon Property Group (SPG) and General Growth Properties (GGP) to pay rent equivalent to 2% of sales, much lower than is typical, according to The Wall Street Journal.