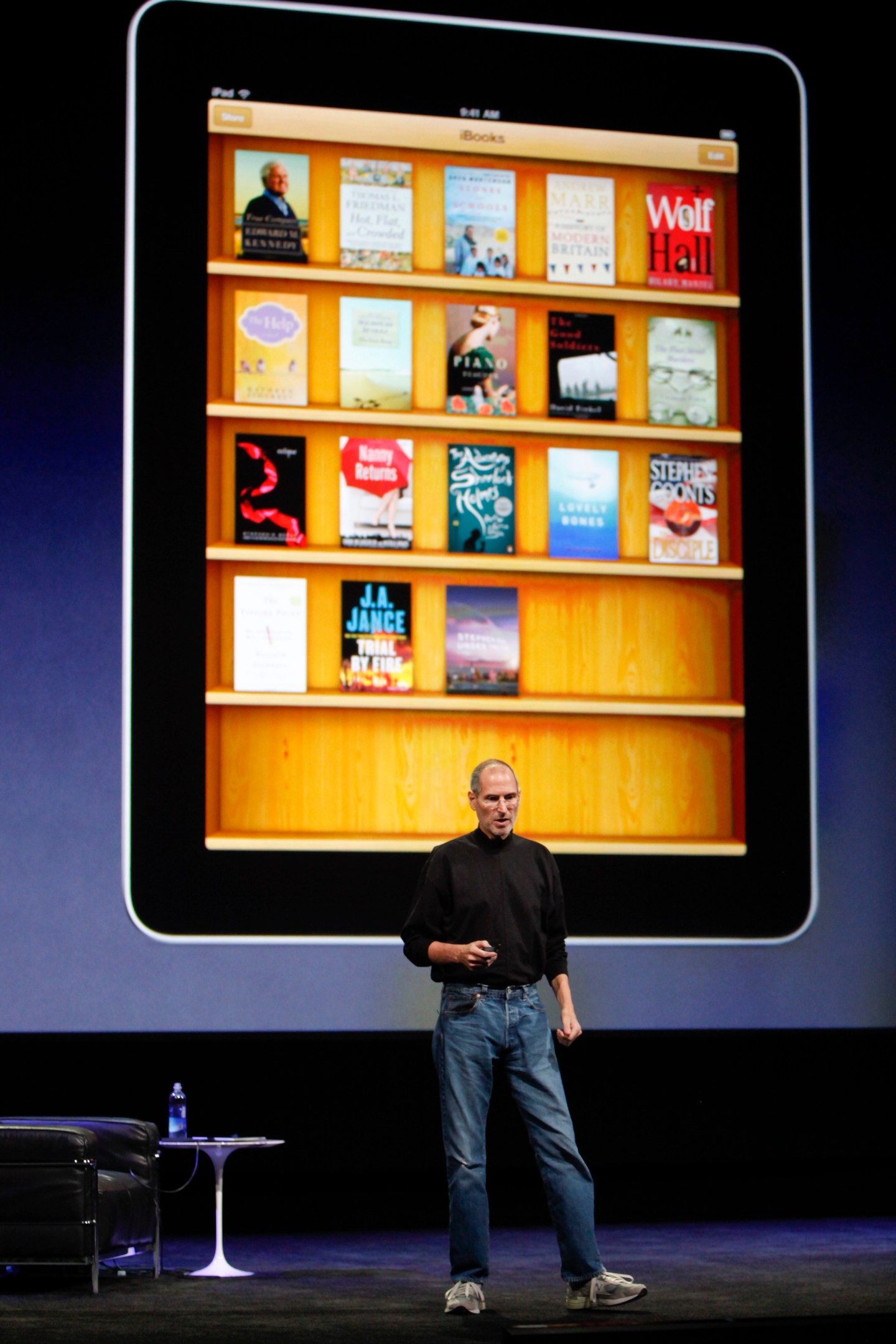 Steve Jobs, chief executive officer of Apple Inc., speaks about the iBooks application during the debut of the Apple iPad tablet at the Yerba Buena Center for the Arts Theater in San Francisco, California, U.S., on Wednesday, Jan. 27, 2010. Apple Inc., trying to expand beyond the Macintosh, iPod and iPhone, introduced the iPad, a tablet computer with a touch screen. Photographer: Tony Avelar/Bloomberg via Getty Images
Photograph by Tony Avelar — Bloomberg via Getty Images

Though much of the business world is now focused on the Apple Watch launch, Apple’s lawyers today were still sweeping up after its messy iBooks launch of five years ago.

This morning the U.S. Court of Appeals for the Second Circuit in Manhattan heard the company’s many grievances regarding an antitrust monitor that a federal judge appointed to oversee certain of the company’s operations in October 2013, and whom Apple (AAPL) claims immediately began running amok.

The panel seemed intrigued by the issues, peppering lawyers for both sides with questions for an hour—about twice the scheduled time allotment.

The monitor, Michael Bromwich, was supposed to oversee the company’s development of new antitrust compliance policies after U.S. District Judge Denise Cote found Apple liable for conspiring with five major publishers to fix the prices of ebooks in April 2010. The company’s appeal from that ruling was heard last December by a different Second Circuit panel, which has not yet ruled. (For a feature story on the issues presented in that appeal, see “Second Bite: Can Apple clear its name in the ebooks drama.”)

In today’s appeal, Apple, represented by Ted Boutrous, Jr., of Gibson Dunn & Crutcher, claimed that Bromwich, a former inspector general for the Department of Justice, has roamed far beyond his narrow portfolio of legitimate duties to the point where he has violated statutory and constitutional limits on the powers that any such court-appointed officer can wield. It is asking that Bromwich be disqualified, and that no one be appointed to replace him until its main appeal has been decided.

The U.S. Department of Justice, represented by Finnuala Tessier, responded that, because Judge Cote had already found Apple liable of an antitrust violation, the monitor’s activities were both lawful and warranted.

There is surprisingly little case law directly on point, since most monitors are voluntarily agreed to by the defendant, in the sense that they are created under the terms of a consent decree or nonprosecution agreement. Bromwich, in contrast, was imposed upon Apple against Apple’s will. While his powers must be, therefore, more constricted, no one’s sure just how constricted.

At least one judge on the three-judge panel—Circuit Judge Dennis Jacobs—seemed to be highly troubled by Bromwich’s conduct, particularly a letter he wrote in which he complained to Apple executives and board members that the company was using its outside counsel as a “shield,” and suggesting that they let him interview them without Gibson Dunn present.

Judge Jacobs asked Tessier if it wasn’t “odd” for Bromwich to complain that Apple was “using outside counsel as a shield? Counsel is a shield in our system.”

Though Bromwich backed away from the request after Gibson Dunn hit the roof, Judge Jacobs suggested that the mere request was relevant to whether Bromwich should be disqualified for bias.

Nevertheless, to prevail, Apple must rope in at least two judges, and the other two panelists today, Circuit Judge Ray Lohier and District Judge Jesse Furman, were far harder to read.

In that respect, the hearing was reminiscent of Apple’s main appeal, which was heard last December by a panel that included two of the same judges, Jacobs and Lohier. On that occasion, Jacobs seemed highly dubious of whether Apple’s conduct amounted to an antitrust violation, while Lohier and the third judge, Debra Ann Livingston, were noncommittal at best.

It’s not known when the court will rule on either matter. An Apple victory in the main appeal might render the questions heard today moot.

Bromwich has interviewed close to 40 Apple officers since his appointment, including CEO Tim Cook and nearly every one of the other nine members of his executive team, plus most of the company’s board of directors. (Though most of these individuals do not get involved in antitrust matters, the government and monitor Bromwich have argued that he needs to understand the company and its culture to properly perform his job.) He also interviewed a publisher or two before Apple objected, Justice Department attorney Tessier acknowledged in today’s argument.

Bromwich’s hourly fee for his work on the matter is not public, but Judge Jacobs demanded today that it be revealed to the judges by Thursday. Bromwich had originally sought $1100 per hour, plus a 15% “surcharge,” for a total of $1265 an hour.

The rate would have made him “one of the best paid lawyers in the realm,” Judge Jacobs commented today. After a mediation, the fee was lowered to its current, nonpublic level. Jacobs suggested that the amount would be relevant to whether Bromwich had an incentive to unduly expand and protract his assignment.

Under the terms of Judge Cote’s injunction, Bromwich’s term lasts until October, though he and the government may request an extension.