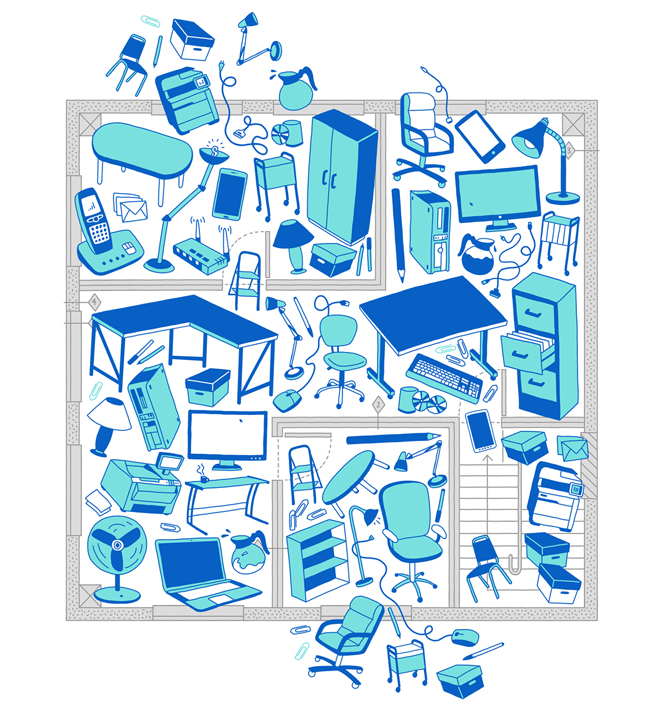 Illustration by Adam Hayes for Fortune

Most people know Staples as a place to pick up a pack of pens or paper, or perhaps have a document printed. In truth, the company (SPLS) hawks just about everything inside the modern workplace, from floor mats to furniture, trashcans to coffee machines.

“People know us for our stores, but this is the hidden gem,” says Neil Ringel, executive vice president of Staples Advantage, the division responsible for business-to-business sales. The unusual product categories—janitorial and safety equipment, break-room fixtures, promotional materials—are a key part of the reinvention of the office-supplies company, which is based in Framingham, Mass., and in the midst of a merger with rival Office Depot. The odd products account for nearly half of the B2B division’s sales, which totaled $8 billion last year, more than a third of Staples’ $23 billion in annual revenue. “It’s not just pens and paper anymore,” Ringel says.

When Staples sells to a larger business, it usually dispatches a lead sales representative—a quarterback, if you will—and a team of specialists to the site in question. But it didn’t make economic sense to take the same approach for a company with, say, 50 employees. Staples’ sales to small businesses were flat—an uncomfortable fact for a company founded in 1986 to serve them.

Staples already had a project in the works to equip its sales staff, about 1,000 in all, with Apple iPads. “It really was a gigantic step out of the dark ages,” Ringel says. Two months later, Staples launched its own digital sales assistant app that integrates with customer relationship management software from Salesforce.com. “It lets you zig and zag a lot easier than you would if you were a sales associate and bringing hard-copy sales materials with you,” says Ed Ludwigson, the company’s vice president of sales operations.

The moves were a boon to sales productivity. But what about those small-business clients? Enter the “virtual assistant.” The new pilot program allows sales associates in the field, iPads in hand, to call upon the same team of specialists as before without requiring them to be onsite.

“I now have Tom, who knows everything there is to know about facilities, on the screen,” says Shira Goodman, president of Staples Advantage. “And we can walk the office with Tom. So we go to your bathrooms, and he looks and says, ‘This paper towel will save you more money.’ ”

Staples’ virtual assistant “is not industrial strength yet,” Goodman says. But it’s one way the company is embracing a Silicon Valley mindset. “Get a minimum viable product out there, test it out, see how customers respond,” she says. So far, things are looking good: “It’s going to work.”