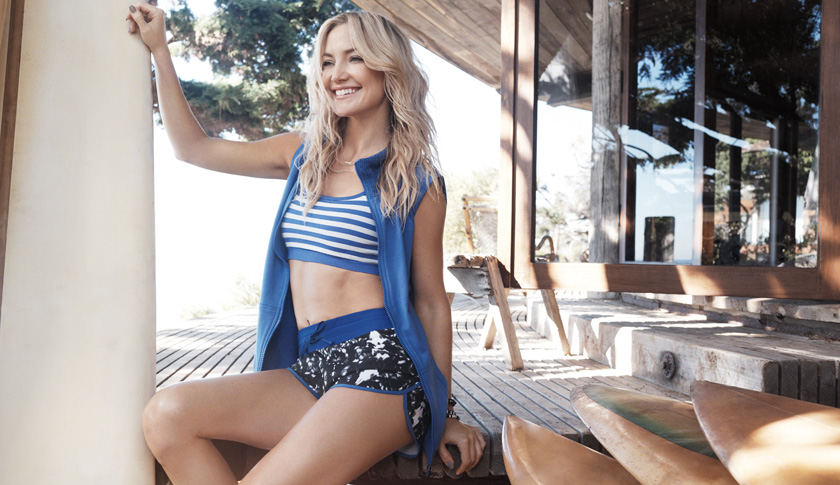 In the past decade, we’ve seen A-list celebrities lend their names to everything from perfumes and Proactiv acne treatment to Nescafé coffee makers and luxury haircare. But the latest bandwagon is a more surprising one: fitness apparel.

In the past year or so, celebrities ranging from the actress Kate Hudson to the singer Carrie Underwood, along with television host Brooke Burke-Charvet have all launched activewear lines. According to WWD, Beyoncé will debut a fitness line with Topshop in late 2015. New Balance has collaborated with supermodel Heidi Klum, and Adidas has worked with Pharrell Williams, Selena Gomez and Rita Ora — but an Adidas company spokesperson emphasized that these collections fall under “lifestyle” rather than fitness. Demi Lovato is the face of Skechers sneakers, and singer Rihanna is Puma’s creative director.

So why have derriere-enhancing yoga pants replaced pricey perfumes as the celebrity product of choice? Euromonitor International research analyst David McGoldrick says that fitness brands are having a moment, and have never been more popular.

“The top fitness brands such as Nike (NKE) and Under Armour (UA) have had a great couple of years,” he says. “Fitness wear is the hot thing right now.” According to Euromonitor International, sportswear increased by 4% in current value terms in 2013, to reach $81.7 billion.

McGoldrick also chalks it up to the cross-over appeal of “athleisure” clothes. “If people were only wearing it to the gym, the sales wouldn’t be so big.” Translation: moms who attend yoga class, hit Starbucks and then spend the rest of their day in their compression pants and hoodie are helping to boost sales.

“Celebrities bring their name to a brand as well as a built-in market and fan base,” he says. “Name recognition plays a big part.” Of course, it also doesn’t hurt when the celebrity sports a six-pack and flawlessly toned legs.

Kate Hudson, a co-founder of Fabletics, wanted to make a product that allowed women look just as stylish in the gym as well as running errands.

“Affordable” seems to be the ethos for many of the celebrity owned (or designed) brands, which are often priced at a mid-range level, in order to appeal to a broader market.

One of the newest lines to hit the shelves is CALIA by Carrie Underwood, which debuted at Dick’s Sporting Goods (DKS) in early March.

“We felt there was a gap in the market for fitness clothing that would work with your entire lifestyle,” says Lauren Hobart, the chief marketing officer at Dick’s Sporting Goods. “You can live your whole life in CALIA. It’s fashionable and also includes items like sweaters.”

Hobart says that Underwood has been the line’s lead design partner and has been involved in all aspects of it, from design to functionality. “She is the busy female fitness consumer,” says Hobart. And with a new baby, we expect she will be even busier.

Actress Kate Hudson is a co-founder of Fabletics, which launched in October 2013. Her leap into athletic wear should come as no surprise, thanks to her ultrafit physique. The products are available online, and shoppers can purchase individual items or join a VIP membership for lower pricing and outfit recommendations. Hudson says she hopes that Fabletics will inspire women to embrace a healthy lifestyle. “That was a huge goal for us, to inspire women to empower themselves by getting active and taking care of their gorgeous selves, not as a fad or a quick fix, but as a way of living that promotes health, community, determination, passion and joy,” she says.

Grammy-award winning singer and brand new mom Carrie Underwood is behind the new CALIA, launching later this month at Dick’s Sporting Goods. The name is inspired by the Greek word for beauty, “Kallos”, as well as calla lilies. CALIA’s collection includes mid-range priced capris and pants, tops and bras as well as accessories such as tote bags, headbands and water bottles. Functionality and design were key; some pockets in CALIA gear were optimized to fit smart phones.

Impact by Jillian Michaels at Kmart

Celebrity personal trainer Jillian Michaels, who spent years at The Biggest Loser, launched Impact by Jillian Michaels at Kmart in August 2014. Her line is Kmart’s first performance collection in their activewear department. It offers 24 styles in four categories: core training, running, yoga and lifestyle, and the collection includes bras, tees, bottoms and jackets as well as accessories such as yoga totes and water bottles. The products have technical details such as wicking, reflective detail and cooling properties.

Brooke Burke-Charvet is arguably best known as the former co-host of Dancing With the Stars but she’s also had her toe in the fitness world, appearing in multiple workout DVDs and gracing the cover of many fitness magazine covers. She’s also a blogger and the co-CEO of ModernMom.com, and president of BabooshBaby.com. This in-shape mom of four launched Caelum Lifestyle in September 2013. Available online only, her collection includes boldly printed capris, leggings and workout tops. The designs are edgy and playful.