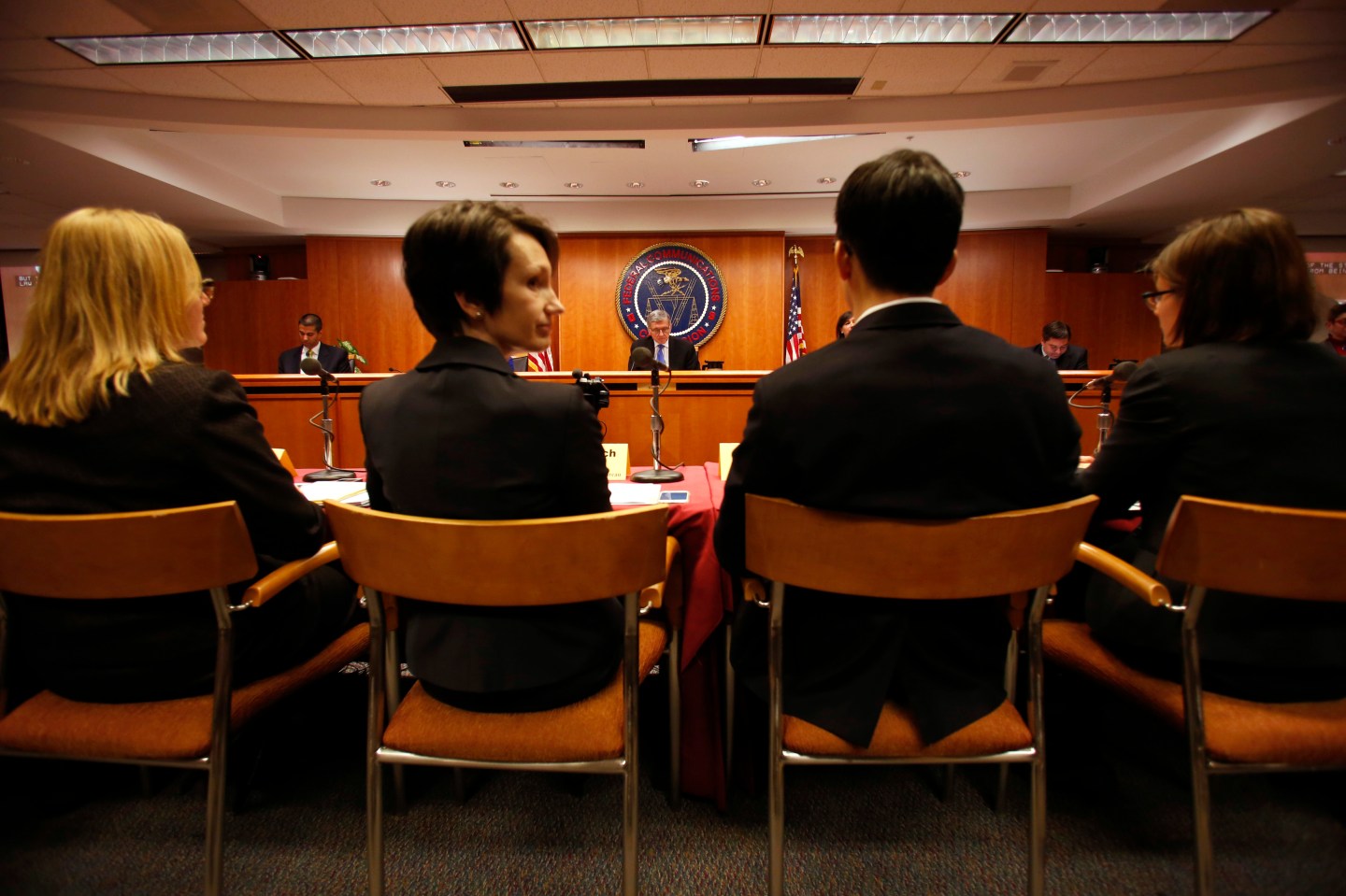 Not long ago, Google execs would have been popping champagne corks over today’s big news from the Federal Communications Commission. The agency’s 3-2 vote to strictly regulate broadband Internet fulfilled a long-shot push by the company and its allies that started nearly a decade ago.

Indeed, the FCC decision marked a stinging defeat for telecoms like Comcast and AT&T, among the most entrenched and moneyed lobbying forces in Washington. They are Goliaths who lost a tough Washington battle, highlighting a shifting political powerbase.

And yet from Google today: crickets. Instead, the company deferred to one of its Washington trade groups, the Internet Association, which hewed to lawyerly language that called the decision, which prohibits paid fast lanes on the Internet for companies that can afford it, “a welcome step” while affirming the organization remains “outcome-oriented” and needs to review the full text of the decision.

The short answer is that Google grew up. Its transformation into a corporate colossus reordered its Washington agenda as it rapidly assembled a lobbying apparatus to promote it. For one, new partnerships with other companies complicated its once near-ideological commitment to the open Internet. Back in 2010, the company angered consumer advocates by negotiating with Verizon — a net neutrality boogeyman — on a framework that would allow Internet service providers to charge content creators for zippier delivery. The plan never materialized but it clearly signaled the company’s evolution. And as Google solidified its dominance, its need to enshrine the most aggressive form of a regulatory regime diminished.

“The logic of networks suggests that the bigger Google gets, the less it has to gain from net neutrality,” says Columbia Law School professor Tim Wu, who first coined the term in 2003. “Now, half the examples out there are like, ‘The good thing about net neutrality is that some guy in his garage can challenge Google.’”

Behind the scenes in recent weeks, Google executives have expressed misgivings about aspects of the FCC’s proposal, with executive chairman Eric Schmidt reportedly going so far as to call a White House contact to register his view that President Obama’s post-election endorsement of the approach was a mistake. But to the extent that Google’s agenda and those other likeminded Internet giants (read: Facebook) differ from consumer groups and grassroots activists in this fight, they’re wise not to announce it publicly.

The tech heavies have learned the hard way that what they do in Washington doesn’t stay there, and that getting crosswise with their erstwhile digital activist allies can be a dangerous proposition. In late 2011, the domain registration giant GoDaddy got caught in the shootout between movie and music studios and activists over a pair of antipiracy bills known by their acronyms, SOPA and PIPA. GoDaddy had endorsed the legislation, prompting a boycott driven by Reddit and Wikipedia users who worried that the legislation would limit free speech.

As a broader online revolt over the measures reached a rolling boil, GoDaddy was forced to withdraw its backing. Lawmakers followed suit, with what had once been widespread bipartisan support collapsing in the face of the furious response from Internet users-turned-activists. Facebook had to engineer a similar about-face after endorsing a federal cybersecurity bill in 2013. The social network quietly backed away after the same crowd of civil libertarians began to stir up a campaign.

In that context, the most striking thing about today’s FCC decision is what it represents as a victory by a diffuse but motivated corps against some of the biggest of the big-money incumbents. A fight that once pitted one industry sector against another – telecom versus Internet – morphed into something else entirely. “The classic cynic’s story of Washington is whoever spends, wins,” Wu says. “That just did not happen.” Google lobbyists may not be sipping any bubbly, but digital activists are throwing a literal dance party. Score another loss for concentrated corporate power in Washington.