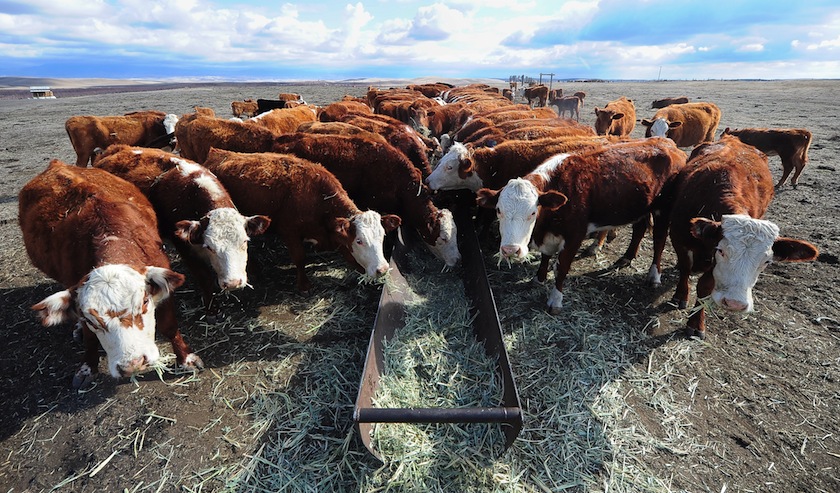 California rancher Nathan Carver's herd of beef cattle feed on hay at his ranch, which has been family owned for five generations, on the outskirts of Delano, in California's Central Valley, on February 3, 2014. At this time of the year normally, the fields would be covered in lush green grass, but the western US states's worst drought in decades has reduced the land to a parched moonscape, leaving the 55-year-old father-of-four praying for rain. While Carver remembers tales his grandparents told of the Dust Bowl years in the 1930's, this is as bad as he has ever seen it in his lifetime, he said. AFP PHOTO/Frederic J. Brown (Photo credit should read FREDERIC J. BROWN/AFP/Getty Images)
Photograph by Frederic J. Brown — AFP/Getty Images

Have a hankering for a cheaper burger or a less pricey steak? Too bad. Beef prices are unlikely to dip any time soon for American carnivores.

The government believes that beef output may drop to a 22-year low this year, according to Bloomberg. The surge in beef has the U.S. Department of Agriculture weighing in with ominous news for consumers: Retail prices for beef are expected to increase another 5% to 6% this year. That’s a bigger jump than any other food group, Bloomberg reported.

The size of the cattle herd at the start of this year was actually 1.4% larger year-over-year at 89.8 million animals, the government said. But output is unlikely to rise—commercial beef production is expected to drop 0.1% this year to 24.22 billion pounds. This year will mark the fifth decline in a row and the lowest amount of beef produced since 1993, the USDA said earlier this month.

The news comes after limited beef supply in 2014 caused prices to spike last year as well.