Horace Dediu: Beware the siren song of the Apple car 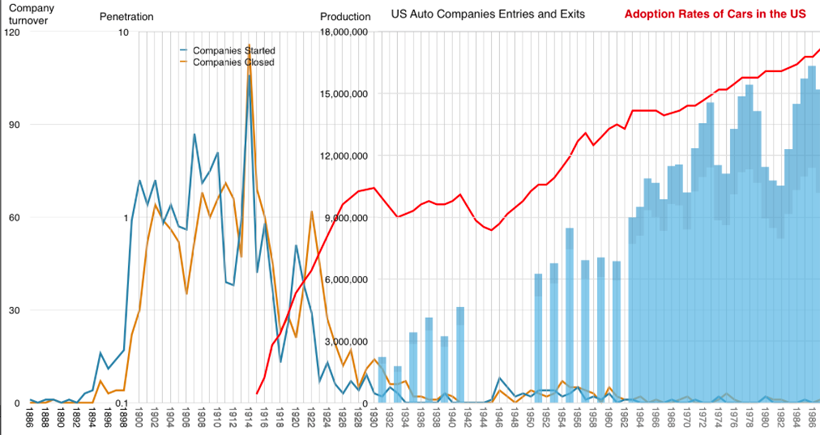 Ten commandments and a chart.

That’s what Asymco’s Horace Dediu delivered Monday in The Entrant’s Guide to the Automobile Industry, his take on the latest Apple product rumor.

Dediu looks at industries through the lens of disruptive innovation, and he’s been asking for some time — before the Apple car reports started piling up — what it would take for a new entrant to displace the U.S., European and Asian incumbents.

The chart, shortened above to fit Fortune’s procrustean format, shows the number of new players in the U.S. auto industry peaking 100 years ago — in 1914 — when production accelerated, economies of scale kicked in and barriers of entry, in his word, exploded. According to Dediu, 1,556 firms entered the U.S. auto market before consolidation wiped out all but a handful.

“In the last half-century 14 tried and all failed,” he writes. “The first analytical task for the entrant today is to ask why there have been so few others succeeding in the last century.”

As for the 10 commandments, they include: (I quote)

They’d better think carefully if they want to get into the hard-core manufacturing. We take steel, raw steel, and turn it into car. They have no idea what they’re getting into if they get into that.” (link)

The difference between Dediu and Akerson is that one thinks disruption is impossible. The other thinks it’s inevitable.