In luxury car sales, status counts, and the rich get richer 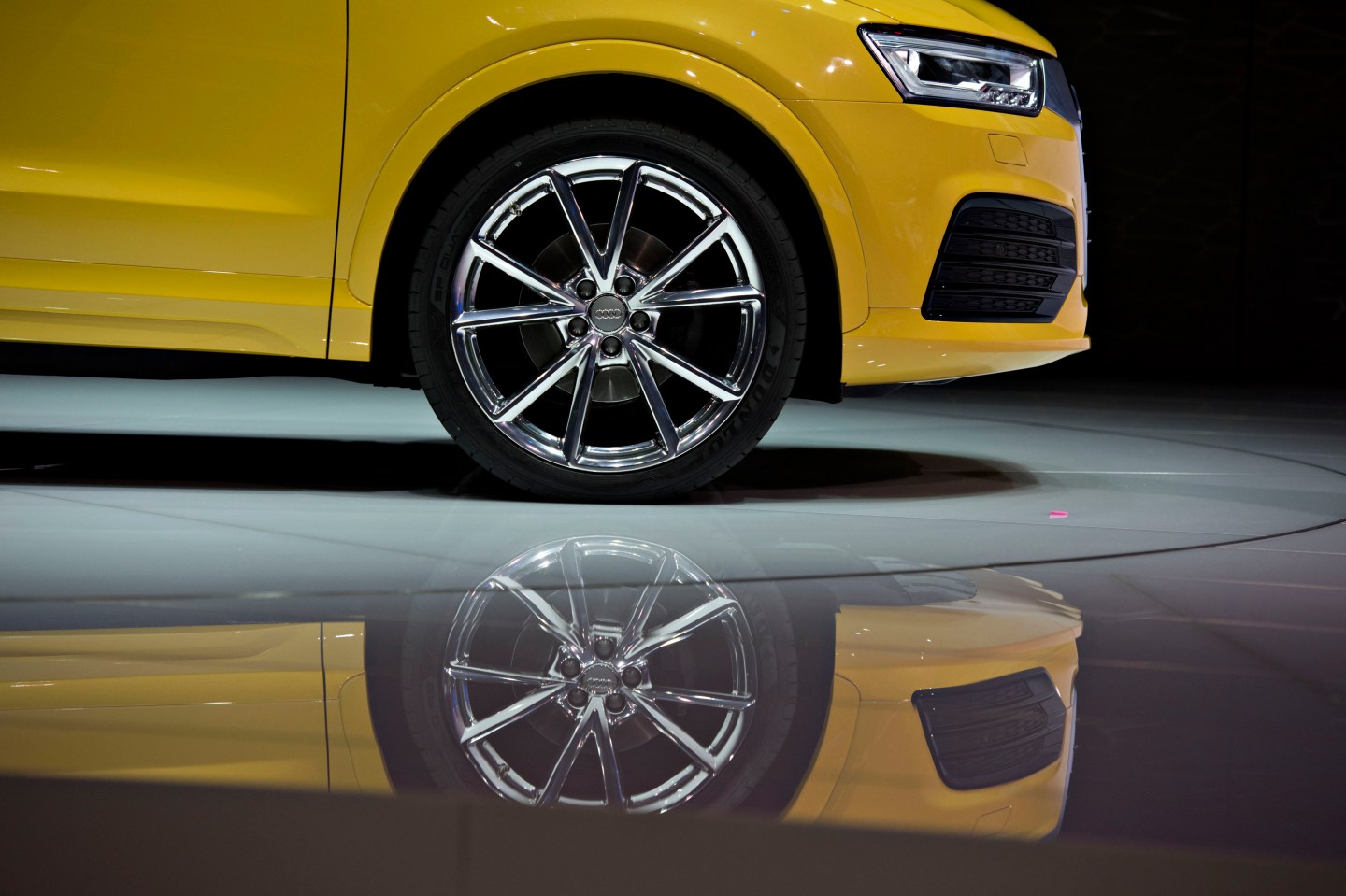 The 2016 Audi AG Q3 vehicle is unveiled during the 2015 North American International Auto Show (NAIAS) in Detroit, Michigan, U.S., on Monday, Jan. 12, 2015. Audi AG kicks off one of the most aggressive two-year model expansions in the luxury-car industry at the Detroit motor show as the German marque closes in on BMW, which sold a record of more than 2 million cars last year. Photographer: Daniel Acker/Bloomberg via Getty Images
Photograph by Daniel Acker — Bloomberg via Getty Images

In the barbell economy, it is the extremes that thrive: Trader Joe’s and Whole Foods; In-N-Out Burger and Shake Shack; G-Shock and Rolex. So it is not surprising that in the seven-year sales surge of U.S. cars, the success of popular-priced brands like Subaru and Jeep should be balanced by a compensating rise in premium and luxury brands.

Top-shelf brands, with cars generally selling for more than $40,000, represent a big and growing slice of the car business. They now account for 11% of total new car sales, when measured by number of units sold. Count the dollars spent, and their presence grows even larger. Luxury cars account for 18% of all car sales revenue, worth $100 billion (figures courtesy of Edmunds.com).

Even those numbers understate the influence of premium brands on the U.S. car business. So lucrative is this market and so long are its product cycles (compared to volume brands) that you would think that the business was being conducted by gentlemen sipping sherry from their leather-covered chairs while attended by white-gloved servants.

Instead, the top brands scrap like schoolyard bullies, challenging each others’ sales results, shadowing their tactical moves, and practicing one-upmanship at every opportunity. Cataloguing the accounting tricks that go into manipulating year-end sales results – in search of a meaningless and potentially harmful designation as the most popular brand – is worth a column on its own.

What all this has led to is a clear pecking order among the premiere players that makes Downton Abbey look like a democracy. Veteran analyst Tom Libby of IHS Automotive divides the luxury players into three tiers. First, there are the leaders, long-established and nearly inviolable: BMW, Mercedes-Benz and Lexus. Then there are the strivers, those that are newer, smaller, and less prestigious: Cadillac (GM), Audi, Acura, Infiniti and Lincoln (F). Finally come the niche brands: Volvo, Land Rover, Porsche, Jaguar, Tesla and Maserati.

Libby sees the share of the overall market commanded by these manufacturers as relatively stable. But beneath the surface, there is immense churning. The three leaders joust among themselves to get an advantage, however temporary, while the strivers fight for admission to the top tier. The smaller players, meanwhile, search for ways to expand their franchises with new products outside their traditional segments Three recent examples: Jaguar’s coming crossover, Porsche’s work with hybrid powertrains, and Tesla’s much-delayed SUV.

Among the top players, BMW is seen as the most vulnerable. In January, it lost its position as the best-selling worldwide luxury brand to its two German competitors, due to an aging product line and struggles in China. “This looks like a pretty significant decline in growth compared to Mercedes and Audi,” said Juergen Pieper, a Frankfurt-based analyst with Bankhaus Metzler quoted by Bloomberg. “I think this will continue during the next few months.” Both Mercedes and Audi have declared their intentions to become the global luxury sales leader by 2020, which could force smaller BMW out of the top tier.

In the U.S., BMW’s competitors have accused of it being volume-oriented and using a heavy hand in marketing incentives to keep sales perking. Their suspicions seem to be born out by recent events. In reclaiming its U.S. luxury sales title from Mercedes-Benz last year, BMW hiked incentives and outspent Mercedes by more than $670 per vehicle. “It seems like that extra boost of incentive spending in December gave them the additional units to pass Benz,” said Jesse Toprak, chief analyst for Cars.com, quoted in Automotive News.

Mercedes knows how to play this game too and also raised its incentives, but at $433 per car, the increase paled in comparison to BMW’s $1,198. Mercedes has looked better lately with successes at both ends of the price spectrum. Its new CLA, whose prices start at $31,500, has been effectively attracting buyers from non-luxury makes. Meanwhile, Mercedes’ S-class has solidified Benz’s position at the top of the market by attracting more customers from its direct competitors.

The sole non-German brand in the U.S. top tier is Lexus, which is also trying to strengthen its standing. After a dearth of new product, it plans to introduce nine new or refreshed models this year. It could use some product-line diversity: One-third of Lexus sales come from a single model, the RX350 crossover. It also needs to raise its average transaction prices to be seen as an established player. At around $48,000, the average Lexus sells for $10,000 less than the average Mercedes.

The fighting is even more intense in the second tier. Audi recently claimed global sales leadership for the month of January, but its U.S. operation is still catching up with the rest of the world. While Audi expects a sixth year of record U.S. sales in 2015, it still sells only about half as many cars as Mercedes or BMW: 182,011 last year. It seems resigned to third-place status. It has set a sales target of 200,000 for 2018 but its long-term goal is only 300,000.

Audi can claim one big victory in 2014: it outsold Cadillac. Life has been difficult for Cadillac lately as it struggles to make the leap from premium – expensive cars – to the luxury category – cars whose valuable brand command an extra margin. Cadillac raised prices last year in an effort to look more exclusive, then was forced to bet a hasty retreat when customers stayed away. At the end of January, a Reuters analysis revealed that Cadillac was sitting on a four-month supply of unsold CTS sedans and six months worth of ATS sedans. Strangely, while its newer passenger cars languish, Cadillac can’t keep up with demand for the old-style Escalade SUV, some highly optioned versions of which, Reuters discovered, can carry prices in excess of $100,000.

The much-heralded revival of Lincoln has also failed to gather momentum. It claimed the title of fastest growing upmarket brand in 2015, bit it did so by adding a new model, the compact crossover MKC, to its lineup. Subtract 13,077 MKC sales from Lincoln’s year-end total, the equivalent of calculating same-store sales for a retailer, and Lincoln actually recorded a slight decline in sales of its older models.

“Both Cadillac and Lincoln have quite a trek ahead of them in recapturing sales from import shoppers,” says Edmunds.com analyst Jeremy Acevedo. “However, they’ve already taken the most important first steps.” Acevedo is high on the redesigned Lincoln MKX midsize crossover and all-new Cadillac CT6, a rear-drive full-size sedan.

We’ll see. Lincoln has only recently aspired to world-class status, but Cadillac is now in the 15th year of its push. The gap between the top tier and the also-rans is a yawning one, and may be a too broad to bridge for these particular players.