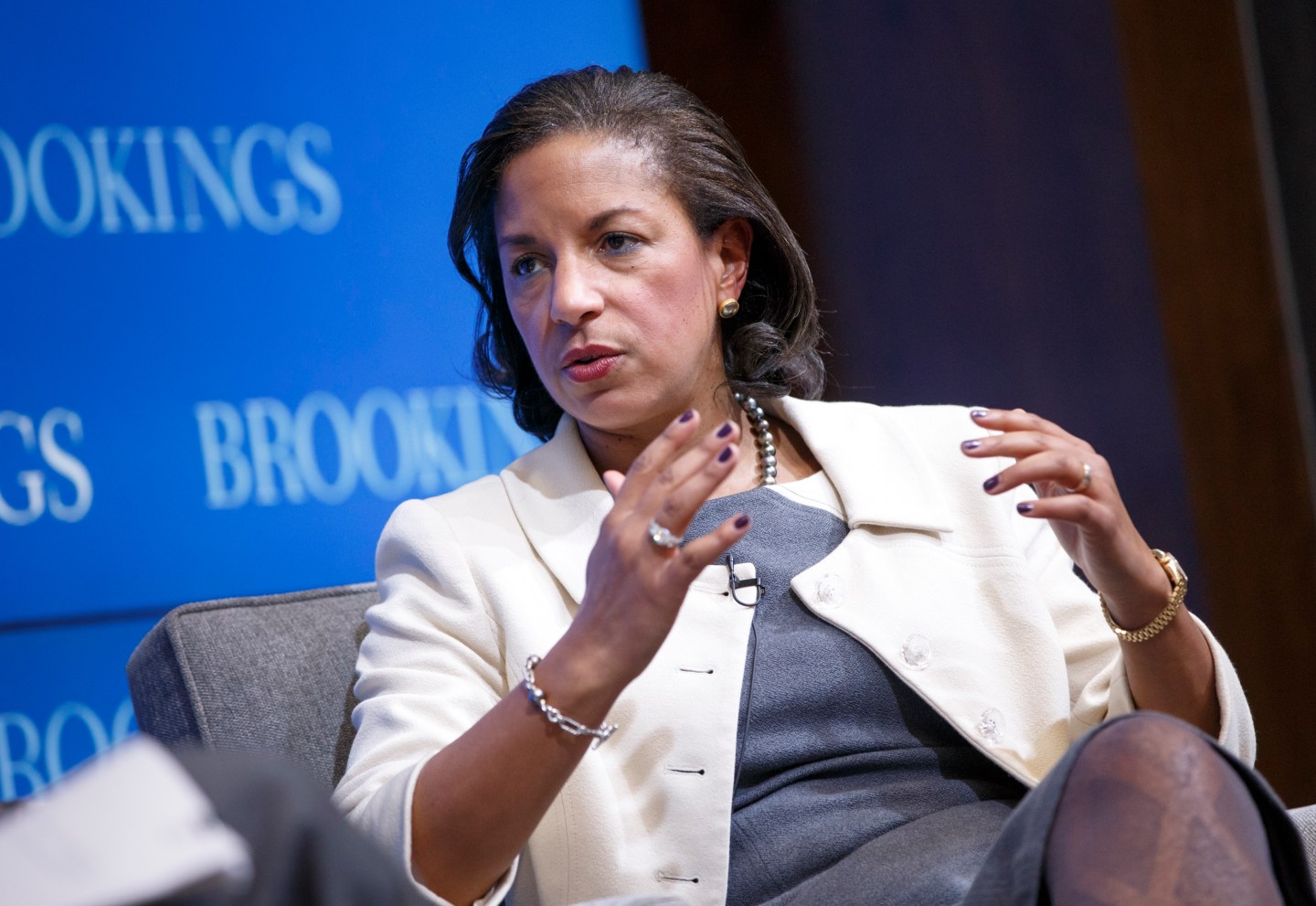 National Security Adviser Susan Rice speaks at the Brookings Institution to outline President Barack Obamas foreign policy priorities, Friday, Feb. 6, 2015, in Washington. President Barack Obama says the US must resist the urge to "overreach" abroad, as he outlined a new national security strategy Friday that is meant to serve as a blueprint for his final two years in office. The 29-page document hews closely to Obama's long-held views of America's role in the world and forecasts no major shifts in the military campaign against Islamic State militants or in the conflict between Russia and Ukraine. Beyond those immediate concerns, he also calls for an increased focus on boosting cybersecurity, combating climate change and promoting gay rights around the world. (AP Photo/J. Scott Applewhite)
Photograph by J. Scott Applewhite — AP

The U.S. government is creating a new agency to monitor cybersecurity threats, pooling and analyzing information on a spectrum of risks, a senior Obama administration official said on Tuesday.

The Cyber Threat Intelligence Integration Center (CTIIC) will be an “intelligence center that will ‘connect the dots’ between various cyber threats to the nation so that relevant departments and agencies are aware of these threats in as close to real time as possible,” the official said on condition of anonymity.

Obama has moved cybersecurity to the top of his 2015 agenda after recent hacking attacks against Sony Pictures (SNE), Home Depot (HD), Anthem (ANTM) and Target (TGT) and the federal government itself.

The Democratic president sees it as an area of cooperation with the Republican-led Congress.

Various federal agencies have cybersecurity components, including the National Security Agency, Department of Homeland Security, the FBI and the CIA.

The Obama administration is trying to connect the agencies “so that there’s one belly button for the entire U.S. government,” Shawn Henry, president of CrowdStrike cybersecurity agency, said on the CBS “This Morning” program.

“That’s a good strategy. It’s important because there’s so many different pieces of intelligence coming in. You’ve got to collaborate and put it together,” he said.
[fortune-brightcove videoid=4036881860001]

The CTIIC will aim for “seamless intelligence flows among centers, including those responsible for sharing with the private sector,” the official said.

The White House counterterrorism coordinator, Lisa Monaco, will announce the new center in an address on Tuesday.

The Obama administration likens the new agency to the National Counterterrorism Center established after the Sept. 11, 2001, attacks, following criticism that U.S. intelligence agencies were not communicating with each other.

It will have a similar broad focus of providing “integrated, all-source analysis” of threats, the official said.

“No existing agency has the responsibility for performing these functions, so we need these gaps to be filled to help the federal government meet its responsibilities in cybersecurity,” the official said.
[fortune-brightcove videoid=3952974926001]

Congress has tried for years to pass legislation to encourage companies to share data from cyberattacks with the government and each other, but efforts were stymied by liability issues and privacy concerns of citizens.

Last month, President Barack Obama proposed legislation to strike a balance, offering liability protection to companies that provide information in near real time to the government, while requiring them to strip it of personal data.