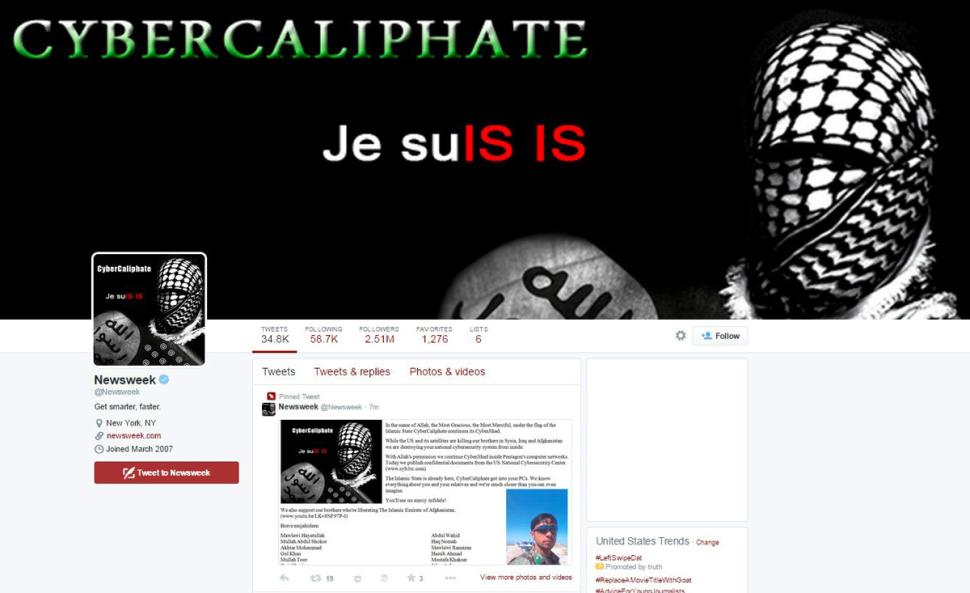 Newsweek said its Twitter account, @Newsweek, was hacked by a group calling themselves the “Cyber Caliphate.” The group claimed to be affiliated with the Islamic State (ISIS) and has previously hacked @Centcom, the Twitter (TWTR) account of the United States Central Command, as well as the official Twitter account of Taylor Swift, the Newsweek report said.

The Newsweek account hack lasted for 14 minutes, the magazine said.

Hackers posted a threat to Obama and his family and the words “CyberCaliphate” and “Je suis IS,” a reference to Islamic State and the French magazine Charlie Hebdo. The group — which also took responsibility for hacking Pentagon social media accounts last month —tweeted “#CyberCaliphate Bloody Valentine’s Day #MichelleObama! We’re watching you, you girls and your husband!”

It also posted a message intended for the United States in retaliation for its actions in the Muslim world.

“While the U.S. and its satellites are killing our brothers in Syria, Iraq and Afghanistan, we are destroying your national cyber security system from inside,” it said.

The message contained a list of names under the heading “brave mujahideen.”

The hack comes following news that the U.S. government is creating a new agency to monitor cybersecurity threats, pooling and analyzing information on a spectrum of risks.

The Cyber Threat Intelligence Integration Center (CTIIC) will be an “intelligence center that will ‘connect the dots’ between various cyber threats to the nation so that relevant departments and agencies are aware of these threats in as close to real time as possible,” a government official said.

In a separate incident, two cybersecurity firms said Tuesday the Forbes.com financial news site was infected by Chinese hackers with spying software that targeted specific visitors, including those at U.S. financial services and defense firms.

The firms said they only had a limited view into the attacks based on customer data and other intelligence.

They said they only identified a few organizations in the defense and financial services sectors that were targeted and declined to identify them. They also said they did not know if the hackers had succeeding in stealing any data, though they believed other visitors to Forbes.com were affected.

Forbes.com is the most popular website known to be compromised as part of an espionage campaign, according to iSight researcher John Hultquist. Previous cyberattacks on popular websites have involved malware used by cyber criminals, not spies, he said.