New England feels under the weather after record snowfall 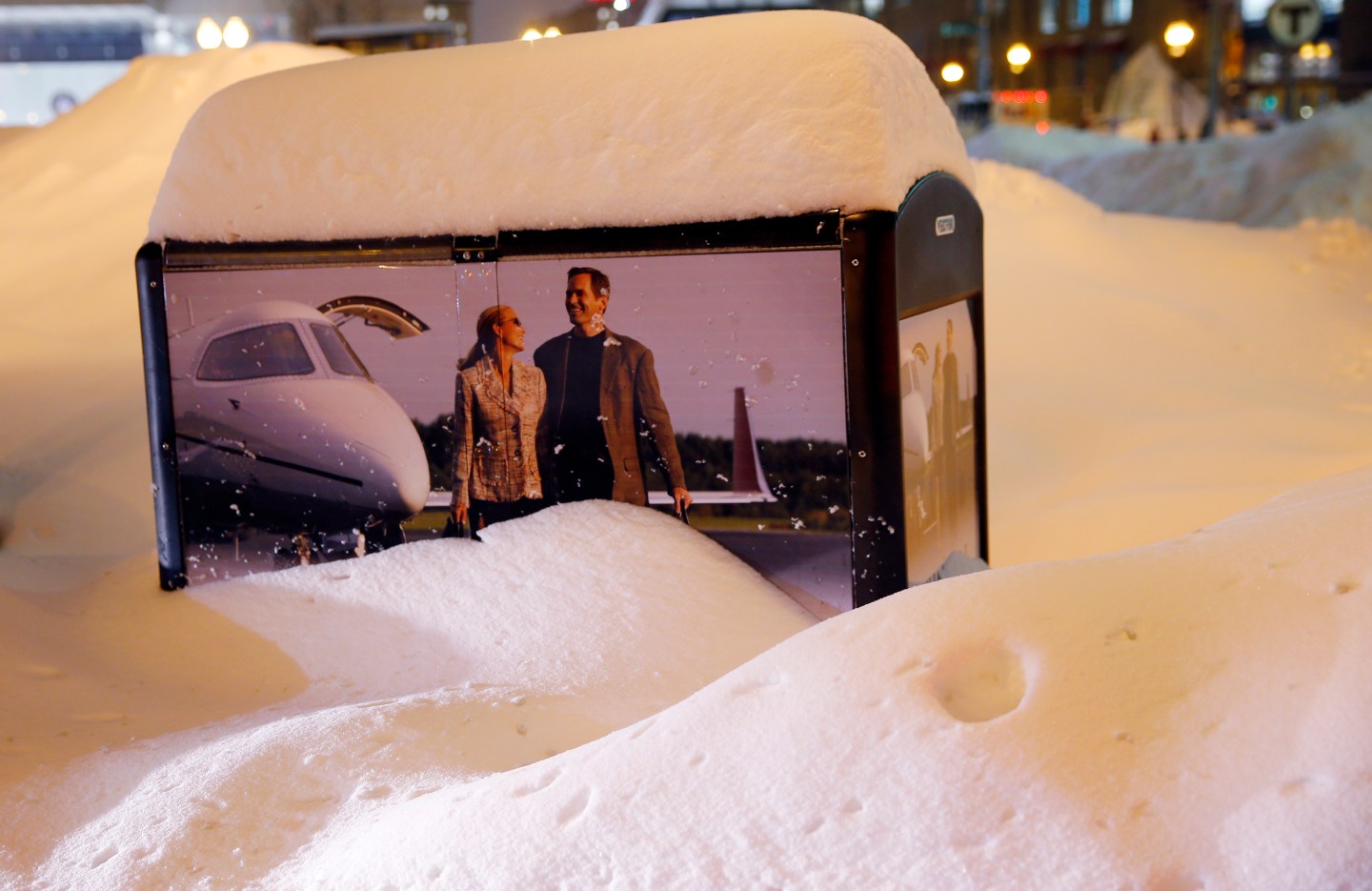 BOSTON, MA - FEBRUARY 9: An advertisement is obscured by snow near South Station in Boston, Mass. on Feb. 9, 2015. Commuters made their way to a train at South Station Monday before the MBTA halted service through Tuesday. The MBTA said it would resume rail service Wednesday in a stoppage to allow it to clear tracks of snow. (Photo by Jessica Rinaldi/The Boston Globe via Getty Images)
Photograph by Jessica Rinaldi — Boston Globe via Getty Images

More than 2 feet of fresh snow piled up in parts of New England on Monday, breaking records set during the Blizzard of 1978 and testing the patience of officials and commuters as forecasters warned of more winter misery later in the week.

The latest onslaught forced the cancellations of hundreds of flights, tested transit systems and tempers and collapsed roofs straining beneath the weight of 5 feet or more of snow in less than two weeks.

Here’s the latest on the winter that just won’t quit:

ONE FOR THE RECORD BOOKS

Boston and areas south were hardest hit, with the National Weather Service reporting unofficial measurements of 26.5 inches in Weymouth, 26 inches in Sharon and 24.9 inches in Norwell. Forecasters expected more than 20 inches on the ground in Boston before the storm winds down early Tuesday.

“You can’t change it. The snow is there,” said Helen Ferullo, a social worker in Weymouth. “You can’t do anything about it.”

Much of Connecticut and parts of upstate New York braced for 6 to 12 inches, and southern Maine was in for about 8 by the time the storm tapers off Tuesday.

Boston-area subways, trolleys and commuter rail trains ground to a halt at 7 p.m. Monday and were scheduled to remain idle on Tuesday, with only limited bus service continuing. The Massachusetts Bay Transportation Authority said it needed the break to clear snow and ice from tracks and to assess equipment damaged by the storms.

Boston’s transit system, the nation’s oldest, has been particularly hard hit this winter. The buildup of snow and ice on trolley tracks combined with aging equipment has stalled trains, delaying and angering commuters. Fifty commuters were rescued Monday from a train that became disabled between stations in Quincy, south of Boston.

A frustrated Baker called that “unacceptable,” and commuters complained bitterly of the daily delays.

Boston set a record for the most snow recorded in a 30-day period, with 61.6 inches by Monday morning, breaking the record of 58.8 inches set in February 1978.

Bangor, Maine, tied its own 30-day snowfall record with 53 inches, which hasn’t been seen in such a short period since 1969, the weather service said.

A man who had just finished work at a supermarket bakery in Medford, Massachusetts, was struck in a parking lot by a private snow plowing truck and died after being taken to a hospital, authorities said.

Police interviewed the driver of the snow plow, but no charges were immediately filed in the death of 60-year-old Cesar Moya.

Police said a former set of “The Finest Hours,” a Disney film about a Coast Guard rescue of crewmen aboard an oil tanker wrecked off Cape Cod during a 1952 blizzard, suffered a partial collapse at an old shipyard in Quincy. The movie, starring Chris Pine and Casey Affleck, is scheduled to open next year.

Forecasters said more snow was expected Thursday and again next weekend, and the Massachusetts Emergency Management Agency warned that potentially record-low temperatures and wind chills are expected later in the week.

The steady run of winter blasts has already sucked up more than 70 percent of New Hampshire’s Department of Transportation winter maintenance budget. Rhode Island, too, said Monday’s storm will use up what’s left of its $14 million budget for snow removal and nearly the entire salt stockpile.

The Department of Environmental Protection on Monday cited the challenges involved in getting rid of the historic snowfalls. Local communities may seek permission to take emergency steps that allow disposal of snow in the ocean or other bodies of water, which is normally prohibited.

Two high-profile Massachusetts trials have been further delayed by the snow. State court officials said testimony in the murder trial of former New England Patriots star Aaron Hernandez would not resume until Wednesday. Jury selection for the federal trial of Dzhokhar Tsarnaev, who is accused in the April 2013 Boston Marathon bombing, also was called off on Tuesday.

OVERHEARD ON THE STREETS

“They were pretty much walking around like zombies. They’ve been working for 20 hours straight.” — Carrie Sullivan, describing plow drivers eating at her Weymouth diner.

“I’m really getting sick of the snow. It’s relentless.” — Matt Beauregard, owner of the Capital Deli in Concord, New Hampshire.