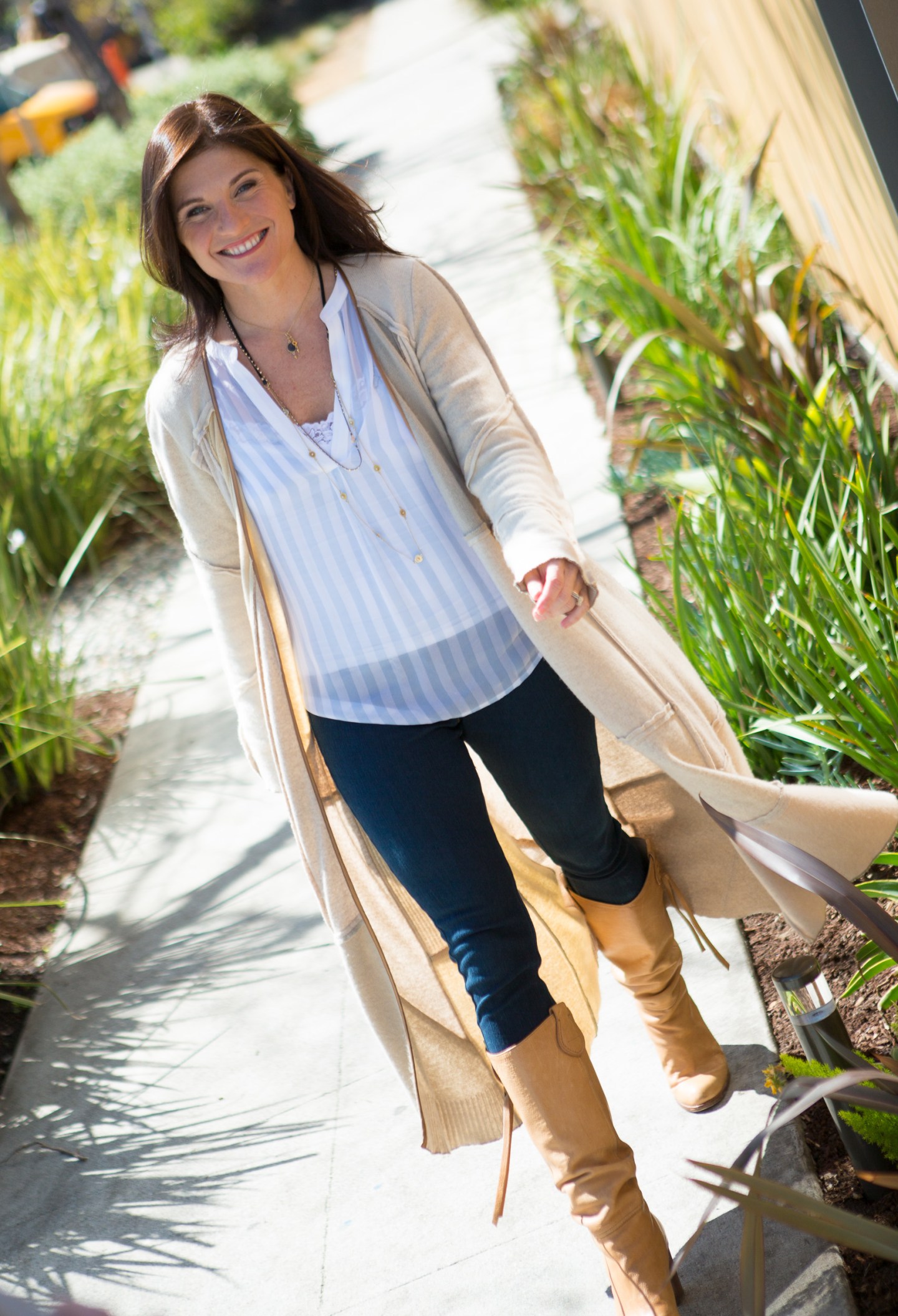 In 2014, Tami Pardee was Los Angeles’ top-selling female realtor. But her life wasn’t always filled with glamour and success.

Pardee started her career as actress Sharon Stone’s personal assistant. That job taught her that human willpower can get anything done. Like the day Stone returned to L.A. after filming a movie, stopped by her under-construction Beverly Hills mansion and told Pardee that she didn’t like the foyer’s cream color. Stone wanted it changed—by the next morning.

It was 1995 and Pardee was fresh out of college. She had worked in the Paramount Pictures press department until a co-worker recommended her to Stone. Pardee landed the job and, because Stone had just let her foreman go, Pardee became the defacto contractor.

Though Pardee had only worked for Stone for two weeks, she had already learned that Stone never wanted to hear that something couldn’t be done. When Stone requested that the entire 30-foot-high, domed foyer be repainted in 24 hours, Pardee simply replied, “OK, what color?” (Taupe, for those who are curious.)

Pardee explained the dire situation to the painters. “We’re doing this,” she told them as she cranked up the mansion’s stereo. Pardee kept the crew awake with pots of hot coffee, cans of Coca-Cola and plates of spaghetti that she cooked up in the middle of night. “We got it done,” says Pardee “And Sharon was super happy.”

Pardee Properties, which has offices in Venice and Santa Monica, wants to continue to capitalize on the tech boom in their backyard. Employees at companies like Google, Snapchat and other hot L.A.-based startups have pushed home prices skyward. According to Zillow, the residential square foot price is $818 in Santa Monica and $752 in Venice, upping the median home sale price to $1.2 million for a space-constrained abode on a tiny patch of land.

However, the seven-figure barrier of entry hasn’t slowed down the market. “Two years ago, we were in a recession and prices didn’t fall that much,” says architect David Hertz, who is developing the AK boutique hotel on buzzy Abbott Kinney Boulevard. “As the recession eased, it turned into a frenzy. The prices escalated and properties were being snatched up in all cash, with multiple offers.”

One could argue that Venice and Santa Monica—with their close proximity to the ocean, walkable neighborhoods and boho chic vibe—are easy sells. But that would undercut Pardee’s tenacity. Her 2014 sales didn’t come from unloading a few eight-figure trophy properties on international moguls seeking a financial safe haven or trust fund beachcombers with cash to burn. She closed 150 deals, essentially selling a home every other business day. “At the end of the day, I’m a worker,” says Pardee.

Pardee’s parents owned a development company in Portland, Oregon. They taught their daughter a healthy work ethic at a young age; Pardee spent hours of her childhood sweeping up the sawdust and cleaning up the construction trash at the sites of the 500-plus houses her parents’ company built.

She escaped from the family business when she spent four years studying at Boston University. After graduation, Pardee bounced through L.A. as Stone’s assistant and eventually moved back to Portland in 1997 to oversee a 100,000-square-foot auto dealership construction project for Caterpillar. “My dad owns a Caterpillar dealership, and he couldn’t decide on a contractor because all of the contractors were his clients,” says Pardee, who was put in charge of managing the all-male construction crew. “The job was supposed to take 14 months, but we got it done in nine months at 25% under budget,” she says.

Pardee returned to Los Angeles in 1998 to study for her MBA at Loyola Marymount. Three years later, she was diagnosed with multiple sclerosis at age 30. However, Pardee wasn’t one to feel sorry for herself. Rather, the news filled her with a greater sense of purpose to accomplish the things she wanted to achieve. “It is within my power to live life the way I want to, wholly and for myself and not let MS alter my outlook despite the challenges associated with it,” says Pardee. To counter the deep fatigue, she says she goes to bed whenever she gets tired (even if that’s 8 p.m.) and takes walks during the day to recharge.

In 2003, she and her husband Michael had Taylor, the first of their four children. Taylor had bad colic, so Pardee initially stayed at home caring for her. But soon Pardee felt the hunger to get back into the business world. She decided to combine her property management skills and business acumen to sell real estate. She earned her license and sold her best friend her townhouse in the Marina for $600,000. “She resold it two years later for $800,000,” says Pardee, who finished her first year—2005—with $32 million in sales. Shortly thereafter, she opened her first Pardee Properties “office” temporarily set up in her Venice home. “We had five people working out of one room that was up the stairs in the back of the house,” says Pardee. “You had to go by every kid’s bedroom to get there.”

Her sweet spot became the upwardly mobile professional—people like the tech guru or the attorney—and she developed a firm grip on the $1.5 million to $3 million market in West L.A. Over the past year, the company has effectively doubled in size by adding a Santa Monica office to its existing Venice location and growing from nine to 43 employees. Hertz refers to it as an estrogen powerhouse—30 of the 43 employees are women—and he views Pardee as the queen of West L.A. real estate. “When I think of Tami, I think of this dynamic woman raising four kids, who is running to a soccer game with a phone attached to each ear,” says Hertz. “She does it all, finding time to be involved in community issues, expanding her firm and raising a family.”

Pardee Properties does things differently than most national real estate agencies. Most agencies are composed of independent contractors who oversee all aspects of their sales, pay their own money to market their houses and give approximately 20% of each sale back to their parent agency. “Everyone in those agencies sells real estate differently, so how is the client experience if you can’t regulate it?” asks Pardee. Her realtors each focus on a specific aspect of the selling process, so there is a tech department, a marketing department, a sales department, etc., with each department contributing to the larger sale in their own way. The company pays for all marketing costs. “We spend more than about anyone on Internet marketing—about $70,000 a month, which individual agents can’t afford,” says Pardee. The return on investment is an average of 45,000 web views for each house posted online and 15,000 Pardee Properties page views per month. (Pardee believes this is 50% higher than the national average, but couldn’t point me to a hard source.)

On each sale, the firm donates 10% of its gross revenue to a local charity of the buyer’s choice; Pardee Properties has given away more than $600,000 to date.

Pardee has also proven she has the foresight to tap into new housing trends just before they erupt. Jim Quandt co-founded the private equity firm Thomas James Capital, which specializes in Southern California real estate and has listed 20 houses with Pardee over the last five years. When they first started working together, Thomas James’ approach to West L.A. was to buy an aging bungalow for $700,000 to $900,000, spruce it up and flip it for a modest profit. Pardee suggested that Quandt try taking a bungalow down to its studs and build something bigger and modern. “She believed it would create a whole new market in this neighborhood and she was confident that we could exit this at $2 million,” says Quandt, who heeded her advice. “Sure enough, it sold immediately for well over list.”

“We have since done this a couple more times where she has said, ‘Buy here, and you’ll create the market,’” adds Quandt. Right now that’s the Venice Canals that developer Abbott Kinney created in 1905 in an attempt to bring the charm and allure of Venice, Italy to the Californian coast. The California iteration never quite prospered—the automobile cut that short—and roads replaced some canals and others were left to deteriorate. It’s there Pardee that has just listed a sharply-designed, four-bedroom, 3,631-square-foot contemporary home for $5 million that is by far the highest ask along the canals. (The home is actually larger than the 2,850-square-foot lot.) A sale near that price point could usher in a whole new kind of property size and aesthetic along the waterway.

Pardee is in full-on growth mode, looking to surpass $600 million in 2015 company sales and personally reach $300 million. She wants three more offices along the Southern California coast, emphasizing that, even in this Internet age, many people still shop for real estate in person. “You see real estate agents on the second and third floors because they are cheaper, but our Venice office is on the ground floor on Abbott Kinney and we have a ton of walk-ins,” says Pardee.

If any potential customers are on the fence about what Pardee can deliver for them, they might consider asking her first employer for a reference. “Sharon called about two months ago because she is renovating her house again,” says Pardee. “She said she needed to find someone like me.”