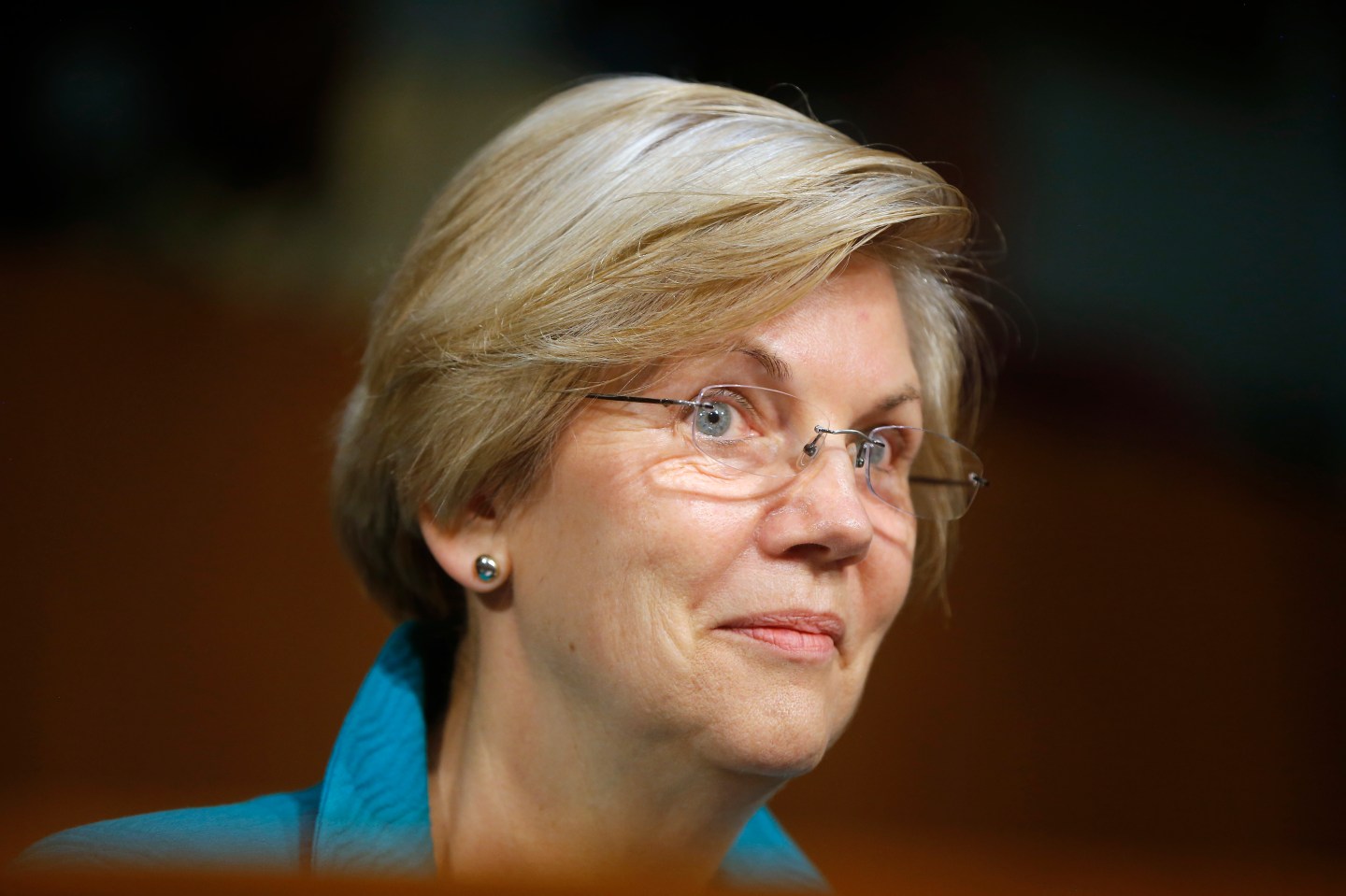 This photo taken June 25, 2014, shows Sen. Elizabeth Warren, D-Mass., questions Treasury Secretary Jacob Lew as he testifies at a Capitol Hill hearing examining the Financial Stability Oversight Council's annual report to Congress in Washington. Warren is quickly becoming a top Democrat fund-raising and campaigning powerhouse. Since March, she has stumped for candidates in Ohio, Minnesota, Oregon, Washington and Kentucky and has trips planned in July for West Virginia and Michigan. Its a hefty schedule for a freshman senator who not long ago was teaching law at Harvard. (AP Photo/Charles Dharapak)
Photograph by Charles Dharapak—AP

Elizabeth Warren, the Democratic star who just last week unveiled a bill targeting the profits of large drug makers, doesn’t sound like much of a populist when it comes to another group of big health care corporations, the medical device manufacturers, many of which happen to be headquartered in the Senator’s home state of Massachusetts.

Warren’s coziness with those companies is now earning her criticism within her party, with one former Democratic Senate staffer describing some of her positions as “repulsive.”

Warren took to the floor of the Senate on Jan. 29 to unveil a bill she said would act as a kind of multi-million dollar “swear jar” for pharmaceutical companies that break the law, penalizing them when they get caught and using the funds to supplement scientific research. With the folksy delivery that has made her a favorite of progressives across the country, she said that powerful, moneyed lobbyists had opposed the bill, but that her message to them and their big business bosses was, “If they don’t want to put a dollar in the swear jar, then stop swearing.”

What Warren didn’t say was that her bill has a loophole in it for medical device manufacturers. Those companies, which make everything from latex gloves to Magnetic Resonance Imaging machines, would be exempt from her proposed penalties unless they also make drugs. At the same time, her bill explicitly ensures that the so-called “medtech” companies would benefit from the research dollars that her “swear jar” would generate.

Warren is widely seen as the defender of everyday Americans against the scourge of business interests that she says manipulate Washington, rig regulation and fuel corporate welfare. But when it comes to the medical device industry, she sings a different tune, albeit quietly. Since she launched her campaign for the Senate in 2011, Warren has come out in favor several medical device industry priorities, including rewriting Food and Drug Administration (FDA) regulations, bolstering federal research funding and making permanent certain temporary tax credits for research and development.

Most visibly, she wants to repeal the medical device taxes that help fund President Barack Obama’s signature health reform, the Affordable Care Act. That position has brought her into a surprising, if temporary, alliance on the issue with the new Republican leaders of Congress, who see repeal of the medical device tax as their most likely legislative vehicle to chip away at Obamacare.

All these pro-business positions have not gone unnoticed. “We’ve enjoyed the opportunity to work with Sen. Warren during her tenure in Congress,” says JC Scott, the head of government affairs for the medical device industry’s top lobbyist, AdvaMed. Scott says Warren “certainly has been engaged with a focus on improving the regulatory efficiency” at the Food and Drug Administration, which approves and regulates medical devices, thanks to her position on the agency’s Congressional oversight authority, the Health, Education, Labor and Pensions (HELP) committee.

In many ways there is nothing extraordinary in Warren’s positions: they are the work of an elected representative ensuring the interests of her constituents. Medical devices are big business in Massachusetts. In 2010, the latest date for which numbers are available from the Bureau of Labor Statistics, medical device companies claimed responsibility for more than 23,000 jobs in Massachusetts, 13% of its export economy and $17.6 billion worth of the state’s economy.

Warren also represents major academic research institutions that are primary beneficiaries of programs that also benefit the medical device industry. “This is a very powerful industry,” says Paul Thacker, a former medical device and pharmaceutical investigator for the Republican staff of the Senate Finance committee, “And she’s looking out for jobs in her home state.”

Warren first enunciated her medtech positions during her close race against then-incumbent Senator Scott Brown in 2012. For the campaign, Brown received $170,650 from the medical device industry, according to the Center for Responsive Politics, while Warren didn’t break the top 20 recipients for industry campaign contributions, receiving only $16,550. In late March 2012, Brown attacked Warren for her support of Obama’s Affordable Care Act, saying it would hurt the medtech industry in Massachusetts.

Two weeks later, Warren published an editorial in an industry newsletter broadly supporting medtech’s policy agenda. Among the positions she espoused were changing FDA regulations to speed approval of medical devices, advancing Congressional research funding for medical devices, making permanent federal tax credits for research and development, and repealing the medical device tax in Obamacare. Warren ended up winning by 8 percentage points, or more than 200,000 votes, in a race that cost both sides more than $77 million.

Warren’s record supporting the medical device industry, which had $336 billion in domestic revenues in 2013, contrasts with her criticism of other industries. On a section of her website devoted to “leveling the playing field” she says, “The most profitable corporations should have to pay their fair share.” The Obamacare medical device tax that she wants to repeal will cost the industry $29 billion over ten years, according to the Joint Committee on Taxation. In a hearing this year on a Republican bill that she said would have lowered the cost of Obamacare on businesses, Warren said, “I’m against adding $53 billion to the deficit so that corporations can push their costs and responsibilities onto the government.”

Warren’s position on the repeal of the medical device tax in the Affordable Care Act draws particular ire from those who fought to pass it into law. Unlike the pharmaceutical and hospital industries, the medical device industry refused to negotiate directly with the bill’s authors over how much of the cost of Obamacare the device makers would bear, say Senate aides familiar with the negotiations. The medical device tax that was ultimately included in the 2010 bill was the result of intense negotiations between its authors and Democratic senators supporting the industry.

“The idea that Elizabeth Warren thinks that one industry should get a sweetheart deal from paying their fair share for providing healthcare to poor Americans is repulsive,” says one former Democratic Senate staffer involved in the negotiations.

The Medical Innovation Act [pdf] Warren proposed last week is also a study in contrasts. Big pharma companies have repeatedly been subject to legal action by the Justice Department, but so too have some medical device manufacturers. One of the biggest device makers, the Minnesota-based Medtronic (MDT), paid $23.5 million in Dec. 2011, and $9.9 million in May 2014 to resolve alleged violations of the False Claims Act. It was also the subject of a 2012 Senate Finance Committee investigation into alleged manipulation of studies into its products.

Warren and her staffers declined to comment on her bill or her positions on medical device regulation, oversight and funding, but her office confirmed that she still holds the positions she took in the 2012 op-ed.

Warren’s defenders say she believes the medical device tax in the Affordable Care Act impedes innovation and should be replaced with another source of revenue. They say her positions on the medical device industry are in line with her broader approach to funding research and development and simplifying regulation. They argue that her bill shields small companies, not medical device makers, by targeting only those companies that make blockbuster drugs that received funding from the National Institutes of Health (NIH). Her defenders also point out that some big drug makers are also medical device makers, and so could be subject to the penalties.

Warren is realistic about the slim chances her Medical Innovation Act has to pass. “I don’t kid myself,” she said as she presented the bill last week, “A handful of actors with money and power like things just the way they are.”

Warren will get a chance to help change things starting next week, though, as the GOP-led HELP committee begins rewriting the regulations and funding mechanisms for both the FDA and the NIH. At stake are the rules controlling how closely the FDA oversees the approval of new medical devices and how much funding the industry gets from government. The House is already moving legislation.