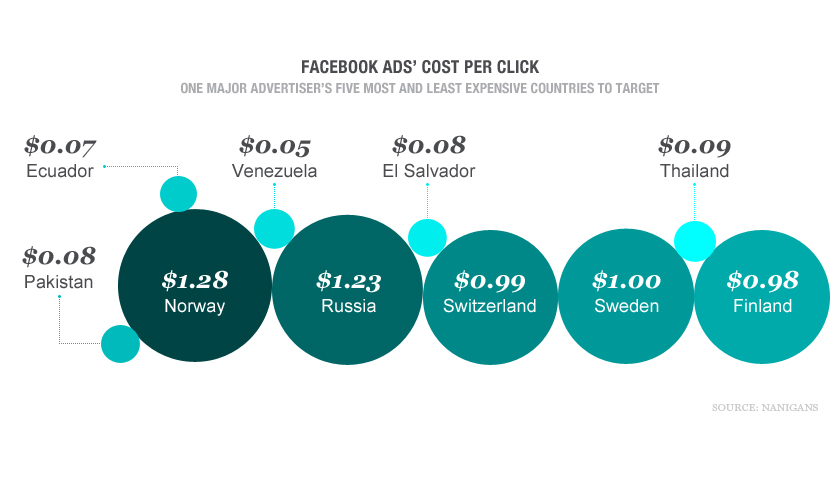 Facebook’s advertising platform, where the company (FB) makes almost all of its nearly $8 billion in annual revenue, is dictated by a mind-bogglingly complex auction system. But the gist is simple enough: the more desirable a demographic is for advertisers, the more it costs to target ads to that group.

It’s not just small fluctuations, either. If you’re reading this in the United States—and especially if you’re a woman—it’s likely that advertisers are spending many times more to target you than they would for other groups around the globe.

Boston ad software firm Nanigans, whose mostly e-commerce clients spend some $500 million a year on Facebook, tracks the cost for them to advertise to different markets. “There are two or three orders of magnitude difference in cost,” says CEO Ric Calvillo. “You can either buy a million Malaysian users or a few thousand U.S. users.”

Calvillo says that for his clients, the Facebook ad market works pretty well. Ads in Malaysia are cheap partially because e-commerce and credit card usage in the country is low relative to the rest of the world. The amount of money advertisers pay to win over a group of new users with Facebook ads, according to Nanigans data, is roughly equivalent to the amount of money those new customers will spend.

For example, ads targeting Norwegian women costs more than ads targeting almost any other group on the site, Calvillo says. But women in Norway also often tend to spend twice as much as it costs to target them. “The Norweigian female is like the brass ring of e-commerce,” he said. “Whatever she costs, you should buy her.”

At the other end of the scale, ads in some countries cost next to nothing—mostly places where Facebook users aren’t able or particularly eager to spend big on American ecommerce sites. Thailand, where 68% of people prefer cash transactions to credit cards, and Pakistan, where Internet penetration is only 15%, are both relatively inexpensive markets.

But companies target to them, too. Calvillo says the auction price for a few of these countries seems artificially high, judging for the low spending rates on American shopping sites. “The really cheap stuff is actually not cheap enough,” Calvillo says, considering the near-zero amount of revenue the bulk of those users bring in.

Why do companies bother? It’s a cheap way to buy “likes,” essentially. That can be useful if a company’s lone goal is to boost its page performance statistics, perhaps as a way to impress potential investors or other customers. For some, having thousands Facebook fans in Ecuador who aren’t actually interested in the business (such as a new restaurant in Schenectady) is still better than having no fans at all. Many a YouTube tutorial on getting Facebook fans for cheap can attest to its appeal.

“The reality is people also optimize for cost,” Calvillo says. “They don’t know what the value is they just want to get the lowest price users.” Next time you judge a site on the number of Facebook fans, check so see where they’re from—some American companies are suddenly very popular in El Salvador. Money can’t buy you love, but it can still buy you a like.

A shorter version of this article appeared in the February 2015 issue of Fortune.