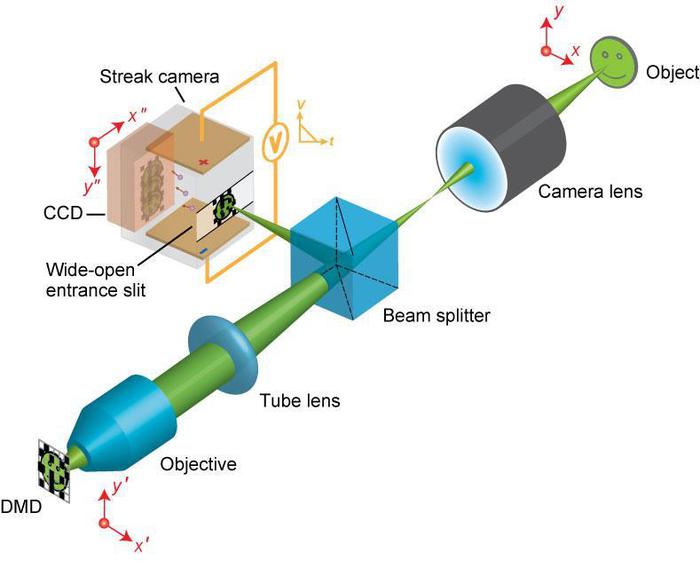 Strain as you might, some events happen too fast to perceive—the flap of a hummingbird’s wings, an atomic bomb’s instantaneous detonation, supersonic bullets carving a watermelon. Advances in optical technology have allowed humans to savor ephemera, extending visual perception beyond bodily bounds.

The latest innovation was announced on the cover of the scientific journal Nature in December. Lihong Wang, a professor of biomedical engineering at the University of Washington in St. Louis, and his team have developed a camera fast enough to image light as it’s propagating. The technique, called compressed ultrafast photography, can capture up to 100 billion frames per second—as much as 10,000 times faster than the next fastest camera of its type (single-shot, two dimensional, no extra illumination needed).

Wang and his team’s invention combines two well-known pieces of equipment: a streak camera (which takes a signal and spreads it sideways into a smear) and a digital micro-mirror device (the engine of many electronic projection displays). Together, the components are able to resolve images in two planes on the order tens of picoseconds. (A picosecond is one trillionth of a second.) Brian Pogue, an engineering professor at Dartmouth College and author of commentary accompanying the Nature paper, says he believes the device’s steep price could easily drop by an order of magnitude, to $10,000, if the streak camera finds a larger market.

Funded by the National Institutes for Health, Wang’s lab is first exploring biomedical applications such as measuring the microenvironment of cells, a technique that could be used to detect the earliest signs of cancer. The camera could also be used to improve communications technologies—optical fiber communications, power transmission, data storage, semi-conductor quality assurance, solar panel performance, and encryption.

The camera may start out more as a toy than anything else, Wang says, just as laser technology did when it was first invented. But the potential to transform science and industry is just as great. “It’s going to find a lot of applications that we can’t even think of,” he says. “I got emails from lots of different companies like GE and others thinking about how they can use this, so we’ll have to wait and see really.” Blink and you might miss the revolution.