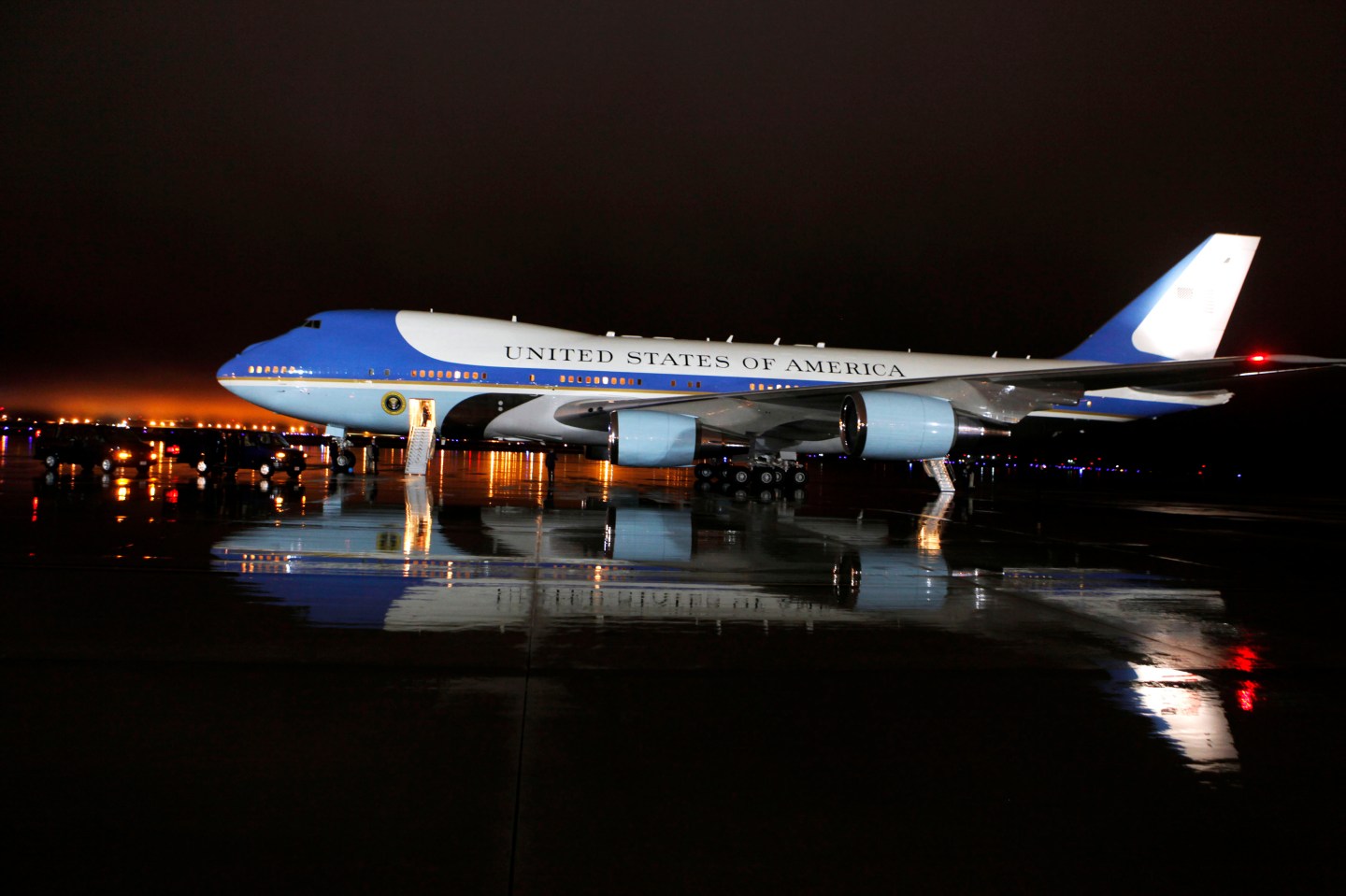 Air Force One sits on the rainy tarmac at Joint Base Andrews after a rainstorm blew through the Washington region after midnight, January 12, 2012. REUTERS/Larry Downing (UNITED STATES - Tags: SOCIETY TRANSPORT) - RTR2W6V5
Photograph by Larry Downing — Reuters

(Reuters) – The U.S. Air Force said on Wednesday it would use Boeing’s (BA) commercial 747-8 airliner to replace its current fleet of two Air Force One presidential aircraft, one of the most visible symbols of the United States.

The decision comes a month after Boeing said it would slow production of the four-engine 747-8 aircraft to 1.3 a month from 1.5 a month because of declining orders.

“The Boeing 747-8 is the only aircraft manufactured in the United States (that) when fully missionized meets the necessary capabilities established to execute the presidential support mission,” said Air Force Secretary Deborah James in a statement.

Boeing welcomed the Air Force’s decision to skip a competition and opt for the 747-8, citing its 50-year history of building presidential aircraft.

The Air Force said it intended to award a sole source contract to Boeing, but they must still negotiate a contract and the modifications needed to adapt the jet for presidential use.

It said it planned to purchase enough of the technical baseline to permit competition for maintenance during the plane’s planned 30-year life.

James said the Air Force One program would use proven technologies and commercially certified equipment to keep the program affordable.

The Air Force decision was widely expected since the only other suitable four-engine jet is the A380 built by Airbus in Toulouse, France.

The 747-8 is the only four-engine commercial jet Boeing makes, providing an extra margin of flight safety over the more standard twin-engine planes.

But the Air Force order for a few 747s might not extend the life of the 747 program, which has failed to capture much business in recent years.

Boeing was clearly trying to preserve production so it could fill the Air Force order, said Richard Aboulafia, an analyst at Teal Group in Fairfax, Virginia.

Now that the firm order is there, he said, it might be an opportunity for the program to end.

The double-decker plane entered service in 1970, undergoing a major overhaul in 2012, with new engines and a longer fuselage.

But last year, Boeing did not get orders for 747s, despite booking a record 1,432 net orders for commercial aircraft. At the end of 2014, Boeing had 36 unfilled orders for the plane, which lists at about $370 million.