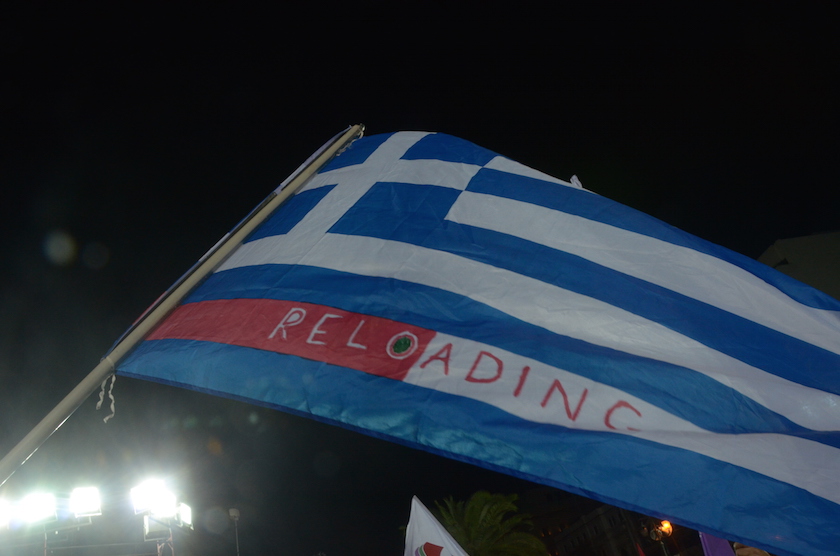 ATHENS, GREECE - 2015/01/26: A SYRIZA supporter holds a Greek flag with the word 'reloading' on it symboilizing that with SYRIZA greece will reemerge from the crisis.SYRIZA (Coalition for the Radical Left) left wing political party won the 2015 elections for the Greek parliament. Its leader Alexis Tsipras gave a speech in Propylaia region in front of the University of Athens to celebrate their victory. (Photo by George Panagakis/Pacific Press/LightRocket via Getty Images)
Photograph by George Panagakis — Pacific Press/LightRocket via Getty Images

Syriza’s chief and Greece’s new prime minister, Alexis Tsipras, is brazenly defying the European nations and institutions that support its stricken economy. Tsipras lost no time declaring that his triumph marks the moment when Greece “leaves behind catastrophic austerity … and five years of humiliation and suffering.”

Tsipras blames Greece’s descent on the slate of tough, even brutal, reforms that its EU neighbors demanded in exchange for gigantic bailouts. He’s pledging two major shifts in policy that, if enacted, will infuriate his European neighbors. First, Tsipras denies that Greece has any obligation to enact the liberalization measures that its creditors—which include the International Monetary Fund, the European Commission, and the European Central Bank, known as the “Troika”—negotiated with two previous governments. “The Troika is dead!” Tsipras announced in his post-election address.

Second, Tsipras is demanding a substantial reduction in the roughly $270 billion in debt that Greece owes to the EU nations. Those funds are dispensed through the European Stabilization Mechanism, an EU organization that gets its money directly from Eurozone members such as France, Germany, and Spain. It’s designed to provide a firewall to protect the Euro. Tsipras contends that his Eurozone partners should suffer big losses, paid for by their taxpayers, for the benefit of Greece.

Watch more coverage on the euro from Fortune’s video team:

The Eurozone is witnessing an unprecedented display of hubris, the undoing of ancient Greek warriors. Rather than demanding debt relief the usual way, by promising deeper reforms, Tsipras has pledged to renege on Greece’s debts while scuttling all commitments to unshackle its economy.

“It’s a surreal situation,” marvels Yannis Ioannides, an economist at Tufts University. “The new government is promising to do things with no money to do them. What does it mean for a government to say we don’t recognize the agreements signed by the previous government?”

If the new government sticks to its sloganeering stance, Greece—probably through a stumbling accident—will exit the Euro. Given its policies, a “Grexit” would unleash a wave of hyperinflation unseen in Europe for decades. But it’s not at all certain that Tsipras will let ideology lead to disaster. Greece depends on the EU and European Central Bank for the funds it needs to keep running—and hopefully, that reality will temper Tsipras’ demands. The crux of Greece’s problem isn’t that it has embraced the reforms demanded by its creditors. In fact, the nation has skirted those reforms and, in the process, done far too little to modernize its markets.

To be sure, Greece has made progress on the fiscal side. It has substantially reduced government spending and lowered once-yawning budget deficits to the point where it now generates a “primary surplus,” meaning that its revenues exceed expenses before covering interest. That’s a big improvement, since the government is no longer forced to borrow heavily simply to make interest payments (which, as we’ll see, are manageable due to a 2012 restructuring deal with its EU creditors}.

Yet the shrinkage in Greece’s super-sized public sector did nothing to lessen the suffering of its citizens. In moving towards a balanced budget, the Greek government has substantially lowered wages and pensions, and companies followed suit. But shrinking pay failed to translate into a like decline in prices, as it would have in a competitive economy. Instead, the prices of groceries and drugs—and the overall cost of living—fell far less than the decline in incomes. That painful combination means that Greeks increasingly buy less and less of anything. To make matters worse, Greece imports an usually high proportion of the goods it consumes, from cars to PCs, and the prices of foreign products remained steady while Greek incomes shriveled.

Why did the cost of local goods stay so high during the downturn? It’s the legacy of over-regulation that’s governed Greek products and professions for decades, rules specifically designed to stifle competition. “Every aspect of economic life is highly regulated in Greece,” notes Costas Meghir, an economist at Yale University.

Greek law mandates that pharmacies generate minimum profits of 15% and grants them a monopoly on the sale of non-prescription drugs and even baby formula. That regime effectively prevents lower-cost retailers from giving consumers a better deal. Licenses for truck drivers cost over $600,000, and no new ones have been issued since the 1970s. A lawyer practicing in Athens lacks the authority to serve clients in Thessaloniki. Foreign cruise lines are effectively barred from starting and ending journeys in Greece. That’s driven the big operators to run their tours from Turkey and Israel instead. Companies are banned from laying off more than 4% of their workforces without receiving government permission that’s predictably hard to obtain.

For many years, those rules prevented Greece from emerging as a force in technology and manufacturing, despite its hard-working, well-educated workforce. Its output-per-worker is just 75% that of its European neighbors, the same meager level as at the start of the financial crisis. Under an agreement with its EU creditors, Greece is obligated to achieve a long list of market-opening reforms. That deal is known as the “Mnemonio,” the Greek word for memorandum. Even the previous center-right government did not do enough to comply with the Mnemonio. It masked the lack of progress with half-measures, laws that were passed but never implemented, and requests for more time.

“The crisis created chances for structural reforms, such as the opening of closed professions, tax reform, and privatizations to increase competition,” says Nicholas Economides, a professor of economics at NYU’s Stern School of Business. Even the previous government, he says, “tried not to change much.” Following a poor showing in the European parliamentary elections last year, it fired reformist ministers and retreated on plans to trim the government’s bloated workforce.

So what’s next for Greece? Here are two possible scenarios. The first is the “Greek tragedy” path, which could proceed from a number of causes—the many possibilities are in themselves a major cause for concern. The second is the pragmatic, compromise approach, which could allow Greece to remain in the Eurozone.

What could cause the Greek tragedy? If Tsipras continues to demand that Greece renege on its debts, dump the reform agenda, or both, Greece is headed for disaster. In the next several months, Greece will need to confirm past commitments or repay loans and retire bonds to secure continued funding from the EU and ECB, funding it can’t do without. Defying its creditors at any of these three junctures could seal its fate. The IMF was scheduled to give Greece $8 billion in fresh funding in September. But because Greece is lagging on its reform agenda, the IMF hasn’t agreed to make the payment. Yet the new government is counting on that money, and over $2.5 billion more from the IMF in 2015, to make its budget work. It’s also planning to spend an extra $22 billion or so to hire more government workers and raise their pensions and pay. But it’s highly unlikely that the IMF will provide that money if Greece ditches the reform agreement.

Greece faces a second, crucial showdown with the European Central Bank. The nation’s banks have suffered large withdrawals of cash in recent years, a trend that accelerated just before the recent elections. On January 22, the ECB advanced Greece’s central bank around $45 billion in emergency funding to supply liquidity to the banks it regulates—in addition to the more than $60 billion it had previously given to those banks. Greece agreed to repay about $8 billion to the ECB in July. Tsipras now claims Greece won’t make the payment. “The ECB operates under extremely strict rules,” says Economides. “It’s likely the ECB would withdraw all of its support for the banks if Greece refuses to pay.”

The third obstacle is Syriza’s demand that the EU nations forgive a big chunk of its debt. “That’s totally unfeasible, insane,” says Economides. “No politician will say to their taxpayers, ‘You need to pay for the Greeks!’”

If Greece defies the EU and ECB over any of these commitments, Tsipras will lack the funds to keep the government running, or, in the latter two cases, the EU will remove the essential support of the ECB, causing a credit crisis. In that case, Greece would need to flee the Euro and reinstate the Drachma. It would then be free to print new currency to pay its debts and fund its vision of a still-bigger government. That’s a recipe for rampant inflation.

None of this has to happen. The interest rate on Greek debt is just 1.82%, and it isn’t obligated to pay any interest for between 13 and 25 years on 80% of its borrowings. If its creditor nations agreed to extend the maturities to 75 years, Greece could easily handle its current debt load. It might be enough for Syriza to withdraw its pledge to roll back previous reforms and to honor its debts in exchange for those longer maturities. “I think they will make a u-turn,” says Economides. “The money they need is so gigantic. They will not have a choice.”

The EU has long been girding for a Greek departure from the Euro. The new government will not succeed in blackmailing its neighbors into granting more bailouts just to keep Greece in the club. Europe’s mainstream governments dread making a special deal with Greece a lot more than a Grexit. If the Troika caves, they’ll hand a powerful weapon to radical, anti-bailout parties that rail against the cost and constraints of the Eurozone and EU.

In theory, pragmatism should prevail. Then again, just look at all the ways in which things could go horribly wrong. The sheer number of them is scary indeed.