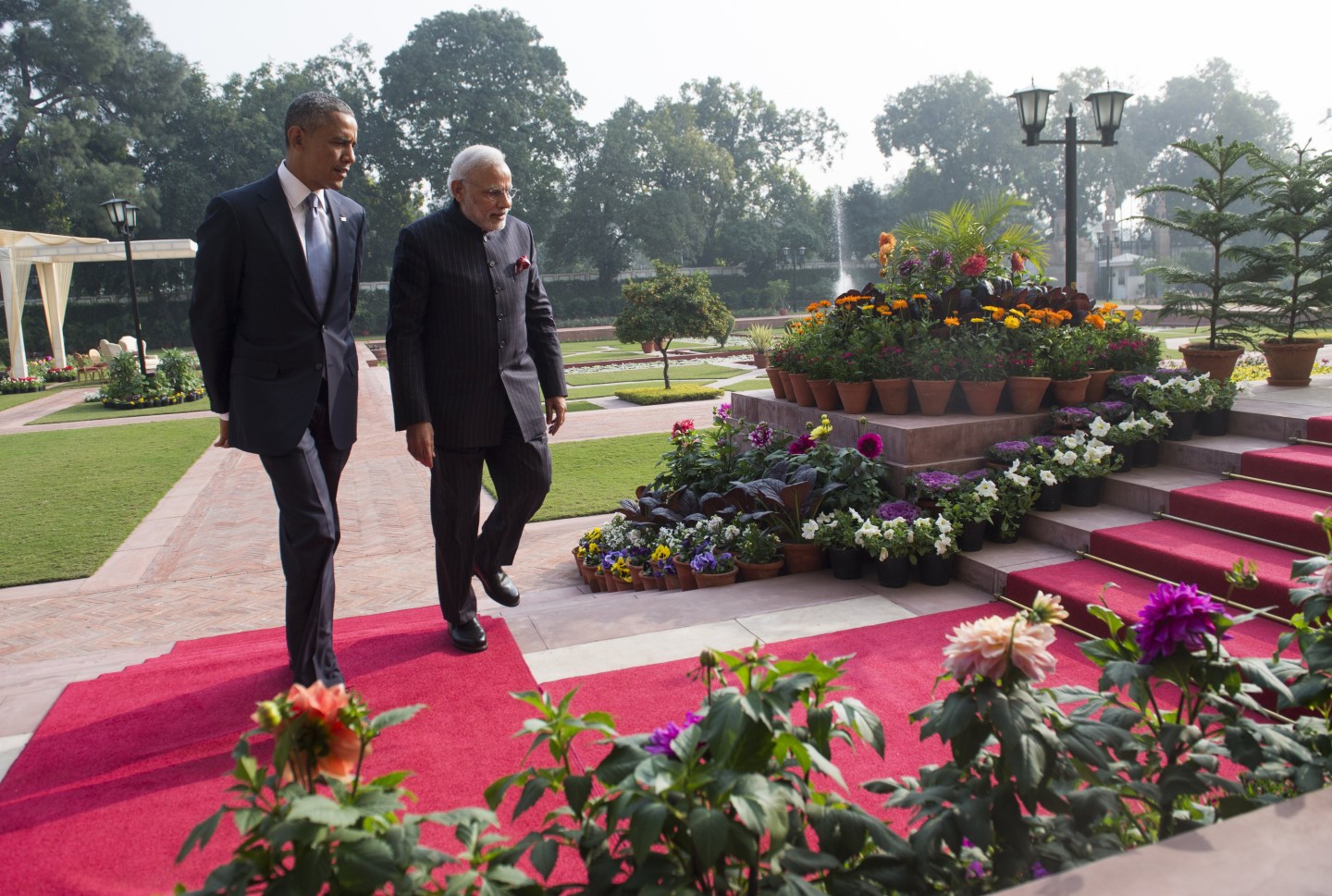 Indian Prime Minister Narendra Modi (R) and US President Barack Obama walk through the gardens between meetings at Hyderabad House in New Delhi on January 25, 2015. US President Barack Obama held talks January 25 with Prime Minister Narendra Modi at the start of a three-day India visit aimed at consolidating increasingly close ties between the world's two largest democracies. The two leaders sat down for a working lunch in central Delhi after sharing a bear hug at the airport where Modi, dressed in a bright saffron shawl, broke with protocol to greet the first couple on the tarmac. AFP PHOTO / SAUL LOEB (Photo credit should read SAUL LOEB/AFP/Getty Images)
Photograph by Saul Loeb — AFP/Getty Images

As President Obama wraps up his three-day visit to India this week, it’s a fitting time to take a closer look at a country that may well be the world’s fastest-growing major economy over the next two years. Though confronting great challenges, India has amazing opportunities with the promise of shared prosperity for its 1.25 billion citizens. But in order to make this promise a reality, India’s government and business community must work together to tackle some of its challenges and realize its economic growth potential.

In order for India to secure its economic future and provide for its citizens, the country needs to increase its GDP by 9% a year in order to become a $10 trillion economy over the next 20 years. Why $10 trillion? Because anything less would not secure India’s social and economic future. In fact, India needs to create 10 to 12 million jobs every year for the next 20 years in order to keep up with its rapidly growing population.

India’s private sector has an opportunity to create jobs and grow the economy. According to PwC’s 2015 CEO Survey, 73% of Indian CEOs expect to boost headcount within the next 12 months, and this is highest compared to any other country in the world. Sixty-two percent of Indian CEOs are very confident in their companies’ growth over the next 12 months — significantly higher than the 39% global average. Finally, 84% of India’s CEOs believe there are more growth opportunities for their companies today than three years ago – again, the highest percentage in the world. This sentiment is driven both by long-term growth prospects in a country with an emerging middle class of 600 million people, and by the more immediate catalyst of a clear mandate for India’s Prime Minister Narendra Modi, who was elected just last May.

But creating jobs and growing the economy cannot be achieved by India’s private sector alone. The Indian government, led by Modi, must work with businesses to implement the reforms necessary to boost the country’s economic growth and development—here, it faces three major challenges:

First, India’s education system presents a major challenge.While India produces quality talent from its most elite institutes, the vast majority of graduates from its primary and secondary education are not sufficiently skilled. That, combined with a recent national survey indicating declining reading levels in schools, does not bode well for India’s ability to develop the educated and skilled labor force needed to fill new positions. Over the next two decades, India must deliver high-quality, formal education to seven million additional children each year in order to meet the country’s demands for skilled labor. Doing so won’t be easy with traditional education strategies, given that just over 3% of India’s GDP is targeted at education, compared with an average of more than 6% across the rest of the world.

While reforming the country’s education system is clearly a job for the government, business must play a role and work with the government to ensure a strong pipeline of educated and skilled talent. The recent effort to foster skill development through the National Skill Development Corporation is one such attempt at creating a skilled workforce.

Second, India’s economy will not achieve sufficient growth through traditional, linear approaches. As President Obama meets with Prime Minister Modi, increasing bilateral trade and investment has certainly been on their agenda. Over the weekend, they resolved key issues in a long-stalled nuclear deal that for years kept U.S. nuclear companies from doing business in India. More needs to be done, however. Trade and investment, both public and private, must focus on productivity and innovation. This will require foreign direct investment that will drive technological spillovers and consequently, will drive innovation. According to PwC’s recent research, a 9% growth scenario in India will be unattainable unless the country makes a strong push in innovation and Research & Development, tripling its R&D spend from 0.8% to 2.4% of GDP over the next two decades.

This is not news to India’s CEOs. The country’s business leaders are concerned with a variety of challenges hindering innovation, R&D and foreign investment. These issues include bribery, corruption, volatile energy costs, and the availability of key skills. Critically, 82% of the Indian CEOs surveyed by PwC said that a government priority should be ensuring adequate infrastructure, while 68% think their government has been ineffective in doing so.

Finally, attracting foreign investments presents a serious challenge, with international businesses wary of India’s regulatory landscape, issues related to corruption and an infrastructure in need of significant upgrade. In order to boost investor confidence, Modi has launched a diplomatic offensive to court foreign governments and investors. By the end of this month —and less than a year into his five-year term — the prime minister will have visited or hosted the leaders of the United States, Australia, Brazil, China, and Japan, among others. However, if India is to attract American companies and investors, it must meet its significant domestic challenges head on.

As India seeks a growth trajectory of 9%, the nation will be attempting one of the largest democratic nation building exercises in recent history. As it does so, the opportunities for U.S. and Indian businesses, entrepreneurs and investors are enormous.

Bob Moritz is the chairman and senior partner of PwC and Deepak Kapoor is Chairman of PwC India.